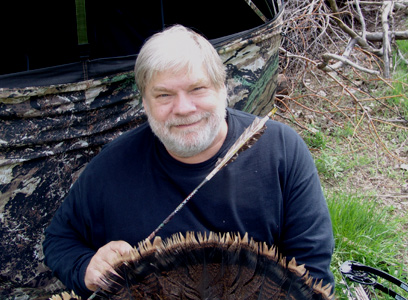 Later this afternoon I have to be at the airport in Omaha so this is the last day of our Nebraska bowhunt — and the last hunt of the 2012 wild turkey season for me.

Both Robert and I each have one tag to fill. We normally hunt together on our hunts. One hunts and the other videos. Today we split up so we both get to hunt.

I decided to go to the hill south of the farm. I’ve had luck there before. Robert killed a gobbler on the hill earlier this week. The Double Bull blind was already in place. 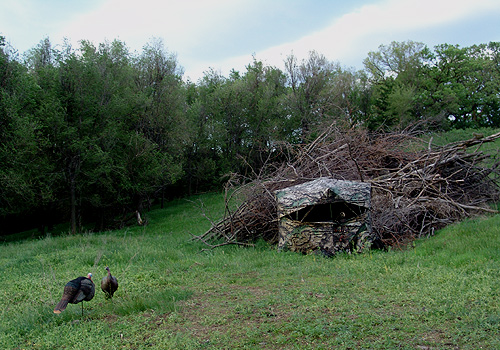 My decision was right. I could see roost trees below to the north. Soon gobbling sounded off with the approaching dawn. And a quick reply came from the trees, downhill to my right, and just 50 yards from my blind. More gobbles sounded off in the nearby trees. I heard 3 different gobblers. I tried peeking out my blind at the trees but couldn’t make out the roosting wild turkey gobblers.

I watched the trees below me and saw several hens and gobblers fly down. I had my video camera set up and filmed their descent.

Good news! They flew down in my direction.

Every day seems different. They can fly down to the fields to the east, fly west to the upper fields or just drop down and meander before deciding which way to head for the day. Today was my lucky day. They hit the ground on my side and I could see them heading my way.

There was a 15 minuet lull when they disappeared at the base of the hill. Soon I saw the tips of a strutting gobbler. 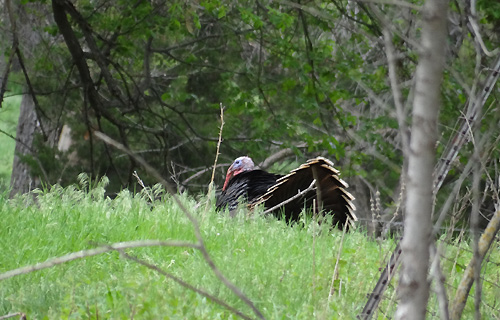 He was probably heading for the gate opening leading to the hilly area west of the farm. And I was tucked in my Primos blind waiting his approach. 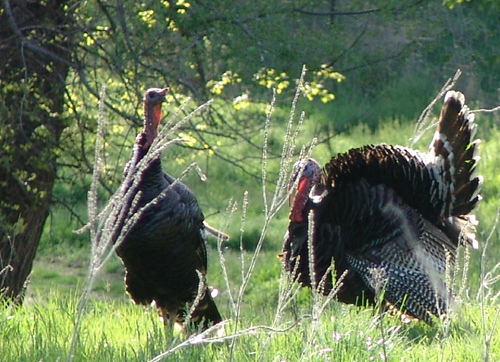 He saw my hen and jake decoy sitting 10 yards in front of me. The long bearded gobbler went right to the hen. I hadn’t even called this morning. The decoys were the magnet.

I drew and waited for the gobbler to clear my decoys for an unobstructed shot. He started spittin-n-drummin and dragging his wings putting on his best show for my hen turkey decoy. I didn’t wait.

My arrow slammed into the center of the gobbler and he quickly disappeared over the hill to my right. He headed down the lane to the lower field. I had no other birds in sight so I quickly stuck my PSE X-Force bow out the blind window and laid it on the ground … and quickly exited the blind.

I went down the lane and saw my gobbler piled up against the fence separating the lower field from the rolling hills to my right. I approached with an arrow ready. His head went up and I drew and fired from a close distance. He was down for good and I grabbed him, not giving him a chance to run down the hill.

What a beautiful morning. The sun was coming up over the river and and from my position I could see miles of the river bottom below. My only thought was “Thank you God.”

I headed back up the lane towards my blind and stopped as I saw an open fan directly in front of my blind. I crept up to see my jake decoy lying on its side and a big long beard Merriam’s gobbler having his way with my hen decoy. I watched for a while and then decided to see how close I could get to the distracted Romeo gobbler. I was way closer than bow range when he spotted me.

He doesn’t know how lucky he was I had no tags left.

I’ll be back next year and Romeo and I will have another encounter. I gathered up my gear, bird and bow and headed for the house. I beat Robert back and waited for his return at noon. Robert had good news and bad news. That is his story and it is a great one. Stay tuned for that.

And Oh! By the way. See you in Northwestern Ontario, Canada in August. I will be looking for the biggest, nastiest, snarling, teeth popping, growling, claw swinging, grand daddy of all black bears to try out my new PSE X-Force EVO 7 bow that I just slid out of it’s shipping box. Life is good! 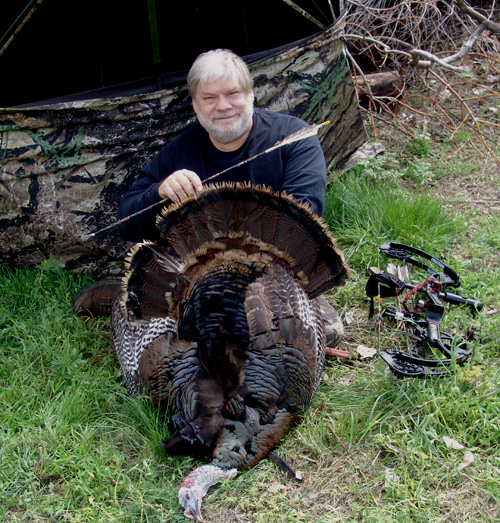 Who put the HECS on my Fletching?

Who put the HECS on my Fletching?