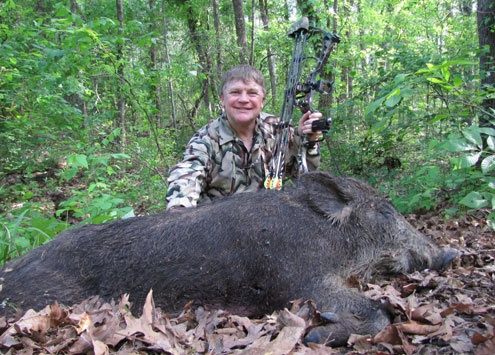 Hog #1 left the group and wandered my way. Waiting on them is a good idea if the wind is in your favor.

The Longview newspaper ran an article on the overabundance of wild hogs up in Texas’ Northeastern corner. You may know this area by a town on I-30 that goes by the name of Texarkana. I was intrigued by the article and saw the overabundance as a blessing. I’ve always been under the opinion that God had arrows in mind when he created hogs. The next step was to find a hog operation that catered to bowhunters like me.

Success came quickly as I found an outfitter by the name of Texas-S bowhunting Ranch.  The ranch is located outside of a little berg called Clarksville TX. One phone call and I was busy packing broadheads and my bowhunting gear. Located well off the paved road and in the rolling, heavily vegetated landscape of this forgotten piece of Texas, I found the gate.

Rex Bannister is the owner but he was off on some hog trapping excursion so his ranch manager, Bill Hibbler met me at the fire circle. Bill told me that it was just about hog:30 and I should get unloaded into the bunkhouse, get my stalking boots on and an arrow on the string. I was ready.

This was not my first rodeo. I love bowhunting hogs and have tallied up enough to overload a Texas King Ranch pick-up truck. These animals are as cagey as a whitetail, have the nose of a grizzly and can open up your leg with those tusks faster than any orthopedic surgeon. The first order of business was for Bill to show me a map of the ranch so we could set up an evening stalk that would keep the wind on our face.

I noticed a number of ponds and a creek bisecting them over near a swamp. Yes, this part of Texas has swamps and many lakes. Texans call it the piney woods. Bill told me of some blow downs and a brushy stand of Post Oaks that he’d seen hogs lay up during the afternoon, so we made a plan.

Move slow and do more looking than moving is the key. I like to use binoculars to scan the underbrush for sleepers. We slipped past the first pond and then crossed the creek when Bill spotted some movement in the distance. Yep, those were hogs and they were all moving behind an estrus sow. This was a great development as the boars, large and small were fired up and trailing this aggravated sow. Must have been 20 hogs of various sizes in this hopeful group.

I used the low angle sun that streamed over our shoulders and the breeze in my face to slip to within 70 yards. The area they were in was the swampy overflow of a flooded tank (pond). There was a lot of bush between us and them. The Post Oak leaves sounded like Fritos under my boots. Rather than try to plod right in on them I decided to wait until the circulating wedding party circled my way. It was worth a shot as a bowhunter always has the advantage if the prey comes to him.

Forty-five minutes later, I was losing confidence in my “they come to you” plan when it finally happened. A medium sized boar about the size of an Ontario black bear veered off the trail of the circulating sow and swung my way. Just then I noticed the wind had died and I felt an intermittent puff on the back of my neck. This is why I had showered and sprayed down with N-ODOR Oxidizer from Atsko Products before we left the bunkhouse. No scent suppression spray is magic but this one uses science to kill human odor. I like science and it works.

I got out my Nikon rangefinder and took readings on two landmarks between the hog and I. Looks like the tree stump is 32yds and the diagonal tree is 21 yards. Now I was ready.

A ton of hogs are wounded and lost by bowhunters each year because they fail to appreciate the difficulty of getting through the course hair, hide and shoulder plate of cartilage. I have a plan for all of that. I recommend a quartering shot to avoid the cartilage plate. Most importantly, I don’t shoot a broadhead that wastes energy trying to push a 2-inch wide hole through the unimportant stuff. The open- on-contact argument is hollow. Why waste energy on an entrance hole. Entrance holes don’t kill.

I like a mechanical that uses a two-step process in penetration and slice. The Swhacker mechanical does it all. It’s a solid one-inch wide cut on entrance and uses reverse chisel sharpened blades to get through hair, hide and ribs. Then step-two; the big two-inch wide cutter blades scissor open and slice internal organs while retaining kinetic energy to make a big exit hole. A bit of physics and science but a devastating plan.

The hog swerved as he passed the stump and as he walked past the leaning tree, I released. I was tracking him as I shot. Unlike deer a hog will not predictable stop if you bleat at him.

I’m sorry, but I enjoy the thump of an arrow connecting with pork. The hog found a lower gear and took off as the greasy arrow skipped across the swamp. We watched him as he circled to join the group and fell short.

An hour later Bill and I loaded him onto a four-wheeler and I had a beautiful hog. These are about the best eating animals on our continent. It is organic pork. To celebrate our early success, Bill had made up some meaty hog ribs for me in a cinder block smokehouse. Great way to end a day of Texas bowhunting.

Next morning found me in an elevated blind near a feeder. In the distance, I observed two different small herds of hogs moving west. I was a bit disappointed when they didn’t turn to visit me. That evening at the same stand around 6:30 my luck changed. Out of the oak grove came a group of hogs moving at a pace that indicated someone was giving away $50 bills over by my blind. It looked like a charge. I was glad I was off the ground.

The hogs at this ranch are all local. The ranchers in NE Texas are thrilled to have the Texas-S guys come in and trap the rooters off of their agriculture fields. They are then brought in and released to stock the ranch. As a result there are more hogs on this ranch than any square mile in Texas. That is a great thing if you’re a bowhunter with a short time budget. I have hunted hogs on great ranches and seen only 2-3 in three days. That probably won’t happen here. This is hog central.

The group moved in to 50 yards and split up into small groups of 2 and 3. I had plenty of time to survey the hog pool. As would be expected the big guy was crowded into a wad with 4 other medium hogs. They began to vacuum up the corn while they stirred around like black bees in a hive. When the big one offered a shot, it opened up and closed in about one clean second. Good thing I was watching at full- draw.

The Swhacker broadhead sliced through his ribs and out the far side. This one grunted at the hit and made a beeline for the creekside brush…and almost made it. He was a beauty. The entrance wound is about 1″ but the exit was a bowhunters delight…over two inches.

A clean kill on a giant Texas hog. Total time hunting 1 ½ days. That kind of success fits the lifestyle of a bowhunter who is on a time budget but likes to launch arrows. It worked for me and I’m sure it will work for you. Give Rex and Bill a click. www.texas-sbowhuntingranch.com

If you want to see this ranch with your own eyeballs click here and watch two hogs get sliced. VIDEO