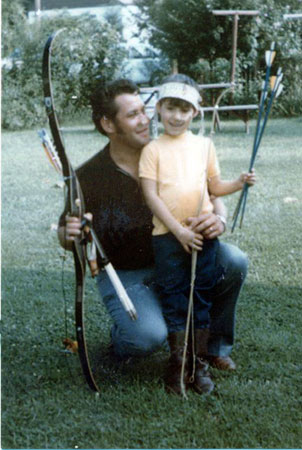 As a Christian, I know that very few things in life are truly an accident. Most things happen for a reason.

Father’s Day just passed and I wanted to share a few thoughts on my father. Once you read my column today you’ll understand why I say few things happen by accident. My parents grew up in the mountains of West Virginia. We have a bow that hangs on display in my father’s retail archery shop that has a unique story. My parents were teenagers when they began dating and my mom ordered Pop a bow from a mail order catalog… I think he was 15 at the time. Having been raised in the timber business, Pop knew the mountains of WV very well, knew about game and had of course rifle hunted. He knew sign and he knew woodslore. So archery and bowhunting appealed to him. Later, mom would begin hunting with him. They recently celebrated 50 years of marriage and have been bowhunting together most of that time.

Pop was successful at learning to shoot the bow and fell in love with archery and bowhunting. One day when I was four I remember my father taking me into the yard and explaining archery to me. The safety aspects, the importance of form, etc. Then he handed me a youth bow and arrows and I was ready to try my hand at archery. I started out instinctive, and 41 years later still shoot that way. Pop’s advice back then— draw the bow, anchor and look at what you want to hit and let it fly. I did.

When my parents traveled to tournaments, hunts and later archery trade shows I was always along. I met Fred Bear by the time I was 12 and dad also made sure I joined him for dinners with people like Earl and Ann Hoyt, etc. I was once the only kid at a private cocktail party Fred Bear hosted and Dick Lattimer took photos of Fred and I at the event and later mailed them to me. Although actually too young to get admission into the major archery trade shows, Pop made sure I got in. He wanted me exposed to people like the Hoyts, Fred and others. I remember Tom Jennings at our house, and others. Stacy Groscup, who’s father Baptized Pop when he was born also seemed to be around a lot. (Nothing happens by accident..again this idea was reinforced)

Anyway, this Father’s Day I wanted to honor my dad. A good man who’s been patient, kind and supportive of me my entire life. I am fortunate to have parents like I have and am fortunate that we have shared hunts in places like Wyoming, Texas, etc. together. Pop’s taken a lot of game, been honored by the archery industry, the state of WV (Distinguished West Virginian by Gov Bob Wise, WV DNR Sportsman of the year

and entered into the WVBA Bowhunter Hall of Fame) and his many friends and customers all recognize his ability to set up and tune bows. He’s forgotten more about it than many will ever know. He is considered a master by some very good archery professionals. He’s designed bows, rests, etc and always gives advice and feedback when new products are launched if a manufacturer asks, and sometimes he gives advice even when they don’t. That’s Pop.

I guess you could say I’m proud of my dad. He just got back today from a bowhunt in New Brunswick, Canada. He took another trophy bear. Again, that’s my pop.

My father kept me on his payroll in my early archery exhibition career. Had he not, I would have had to give up and gotten a real job. However, he encouraged me to hang in there and I was eventually able to thank him for his help and stand on my own two feet. Had he not gave me that time to get established I’d have given up and went into a different career. The best dads are the ones that give you instructions, guide you and give advice and then let you make your own way. I did fall a few times but was told to get up one more time than I was knocked down. I listened.

Thanks Pop, you and Mom have been great parents and I appreciate what great grandparents you are. Happy Fathers Day Pop.