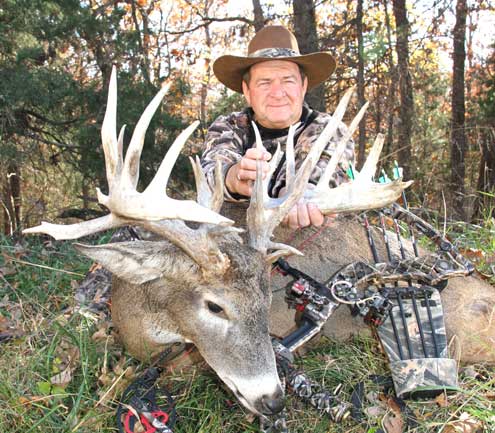 I can not believe how many times I have hunted my butt off in the month of October, especially over Halloween. You pick the spot and time during October and my favorite day to hunt is Halloween Day even if it’s on a full moon.

Let’s look at what is going on during this time frame. On a map of the US, no matter where you throw the dart it will put you right into the week of either the pre-rut or a full blown rut. The does get bred and then have their fawns sometime in May of the following year.

Now I know a lot of you may be wondering what the devil I’m talking about. I have kept a Hunting Journal for the past 30 years and my records show no matter what the Moon Phase, temperature or conditions are I want to be hunting the last week of October or the first week of November.

Donald Hill, at the famous Oak Creek Whitetail Ranch in Bland, Missouri has invited me to hunt of Oct 31 through Nov 2 for the past three years. I am honored and privileged to have been invited to hunt with Donald and if you follow my articles in Bowhunting.Net you know there are some monster bucks at Oak Creek Ranch.

When we arrived late Sunday night October 30 it was raining and showing all the signs of a tough hunt. We renewed old acquaintances and new resulting in a late night to bed.

5:00 am, Halloween day came earlier than usual. It seemed like I had just closed my eyes when it was time to get up. I had to make the most of the three hours I did sleep. During a bleary-eyed breakfast Donald and all the guides were excited about the morning’s hunt. It was clear and cool, 32 degrees. Cleat Sullen, my guide for the past 3 years, told me he had a great spot set up with a Carbon Express Mathews Edition Ground Blind under a huge Blue Spruce tree near a 2 acre food plot that was being pounded by deer. He also said a really good 10 point had been photographed by the Spypoint LR-7 camera. Folks, if you’re not aware of the Spypoint Cameras you should go to their website and check them out. They have one of the most impressive line of trail cameras I’ve ever seen and the quality, features and picture quality is top notch.

We arrived at our blind at first light. A little late to suit me but I was not going to complain. There were all kinds of rubs, scrapes and deer activity right in front of our blind and that got my heart pounding. It was 32 degrees, wind 5 mph, clear skies and the moon was in the first quarter. It was a picture perfect morning and the rut was cranking up on this last day of October. I took out my bottle of Timber Valley Fresh Scent 4-Play and doctored up a scrape about 25 yards in front of our blind, then crawled back inside, sprayed everything inside the blind with Atsko’s N-O-DOR and got ready. While Atsko Products are known the world over, Timber Valley is not a big name in the scent industry. However, this is another product I rely on and highly recommend. The owner Cavan Sullivan only gathers urine when his does are in their 24 hour cycle. It is caught in stainless steel tanks and then shipped overnight to the consumer so it arrives clean, fresh and potent.

We were in the blind for about 20 minutes when I heard a buck grunting and coming closer. It was a young buck in pursuit of a hot doe. Like most bowhunting, one moment we were on an instant high and the next a sagging low. The morning was getting long and we had only seen an 8 point buck coming off the food plot. With the caliber of bucks at Oak Creek this 8 point was hardly a shooter. We waited.

Like most times in the woods there was always something going on. The morning was busy with squirrels running around making all kinds of noise while Crows and Blue Jays kept up a constant chatter all around us. It was almost 8:45 am when I turned to Cleat and whispered that it was a typical first morning for me on Oak Creek Ranch. The first mornings always seemed to be quiet with few deer sightings. I knew that would change.

At 9:00, Rusty Weed, my Camera man said, “I just heard a buck grunt” Yeah, Yeah I answered! And then Cleat, said “I heard the buck grunt too, he’s back to our left”. I had the angle so grabbed my Brunton 10×43’s and started glassing the area. I focused on a young tree and I mean a tree not a bush being beat up real bad. Cleat, said “Get ready boys and watch this”. He picked up his Buck Grunt Tube and gave a snort wheeze. The tree stopped moving. Still focusing on the tree I saw a deer coming toward us. He slowly entered a small ravine and I got a clear look at him. My heart came up in my throat – he was a monster buck and I mean MONSTER.

The buck started circling from our left. He crossed the ravine and by the time the he got within 30 yards of our blind I knew had to stop looking at the head gear! Out of the corner of my eye I could see him bobbing his head, trying to find the intruding buck. It seemed like an hour while he stood there looking around and sniffing the air for that phantom buck, or any danger or any hot doe that may be close. He turned his head and I could see his eyes zero in on our blind. I thought for sure he would turn and blast off but he then just started to nibble on some of acorns laying on the ground and sniffing the scrape.

This went on for over 5 minutes and then he suddenly turned and started walking from my left to right. I had my Mathews Z-7 Mag ready, drew back and settled my 25 yard pin on the sweet spot right behind the shoulder and then the Victory V-Force was on its way. Instantly there was a horrific whop and a huge Red Hole opened where the Mathews Edition 3-Blade Grim Reaper had blasted through. The buck kicked and then lunged into a burst that we all knew would not take him very far.

Then, as is always the case, the emotions took over, adrenaline rush and relief but now the realization that I had just shot the biggest deer of my life! It was a monster non-typical buck and it was almost more than I could handle. “I’VE GOT TO CALM DOWN” I said.

As I walked over to where the buck was hit I could see deer hair, blood and meat all over the ground but no arrow. There was no tracking, just walking and seeing the blood sprayed on the trees and leaves for about 70 yards, in a big circle. As I approached my buck I can tell you there was no ground shrinkage. We were so enamored with the monster buck that we almost missed seeing the arrow lying on the ground not 3 yards from the buck.

After much back slapping and photos, I sat back against a white oak and reflected on what had happened this morning and it was way beyond belief that God could grant me so much in life and then allow me to take a magnificent animal like this one.

The buck had a typical 6 X 6 frame with 27 scoreable points and officially scored SCI – 234 1/8th. It was a buck of a lifetime and I want to thank Donald Hill and his entire staff at the Oak Creek Whitetail Ranch, one of the best Ranches I have ever hunted.