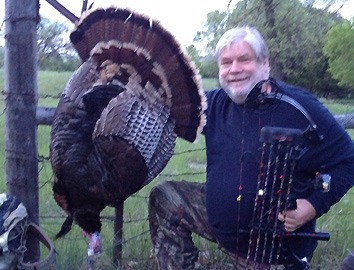 When Fred shot the gobbler it ran through the gate (30 yards away) and took a left for a short distance and went down out in front of us, on the other side of the fence about 45 yards away.

Surprise! A longbeard ran up to the downed gobbler and attacked it. The attacker pecked the other gobbler fiercely in the head, neck and face. 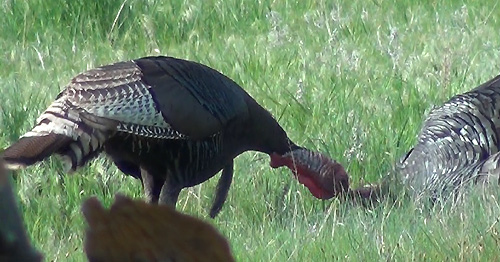 Then he grabbed the gobbler by its long snoodle and shook it’s head roughly. It offered no resistance. 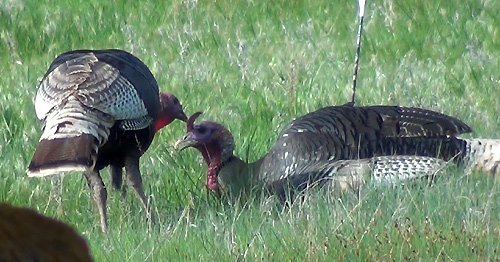 When he finally let go of the fallen gobbler its head fell straight to the ground. And it did not move a bit.

The attacking gobbler was really worked up and it grabbed the passive opponent by the skin on its face. 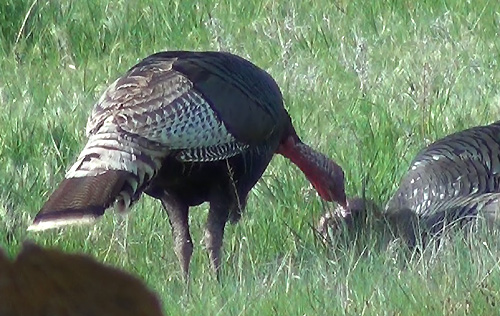 Acting with uncontrolled strong force it yanked, pecked and shook the other gobbler. And the best we could tell Fred’s gobbler was completely spent and dead. 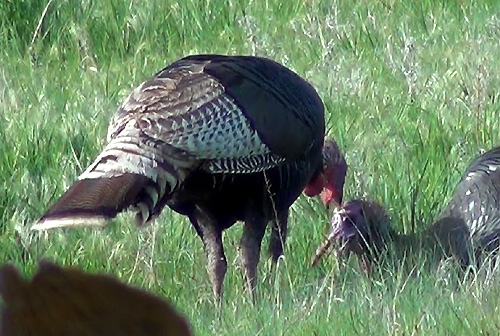 The one sided battle continued. But finally the attacker stopped, either to rest up or go on about its day. 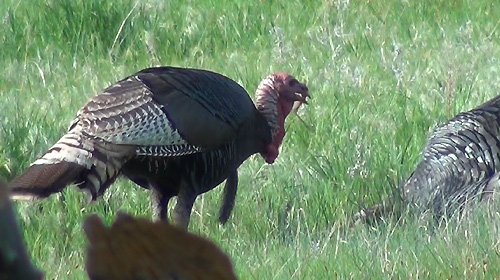 It decided to go on and turned around and walked back the way it came. When it was out of sight Fred and I looked through all the windows in the blind and checked our surroundings. Right now no wild turkeys were in sight right 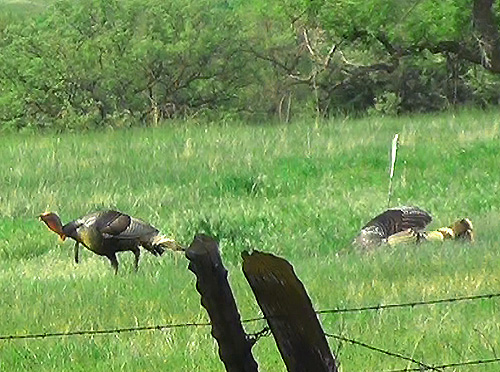 Fred stepped through the front window on his side and went for his gobbler. It is to the right of the tilted, double post on the left. 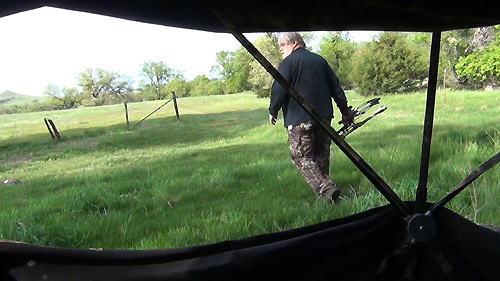 Fred recovered his longbeard gobbler and carried it back to the Dark Horse. 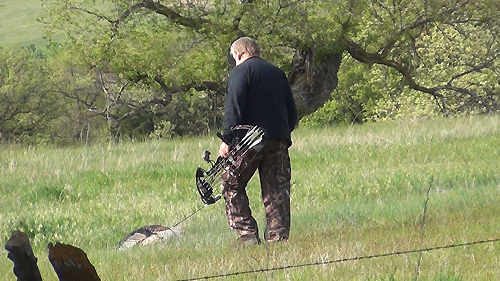 Here Fred is explaining what happened on this hunt while I video it. 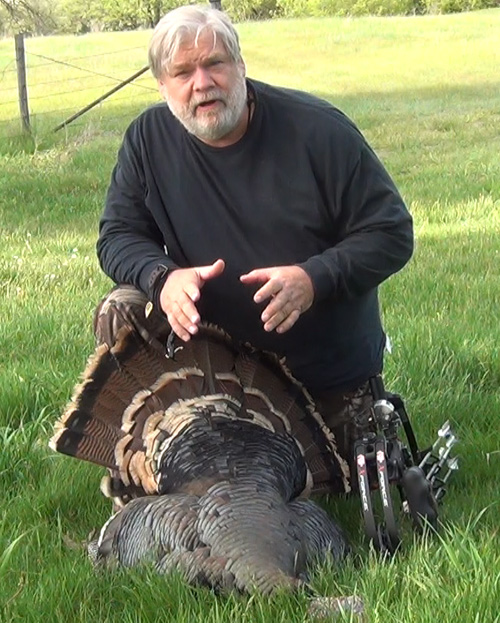 We saw several other gobblers during the hour of turkey light that remained. They were headed for the roost area. 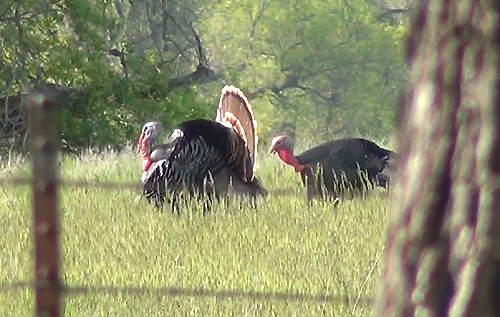 Here is my hunting buddy Fred Lutger of Freddie Bear Sports in Tinley Park, IL. We’ve been hunting together since the early 80’s. Every year we hit the road for our wild turkey Grand Slam tour. And this Merriam’s gobbler makes Fred’s Grand Slam for 2012, that is #7 for Fred. 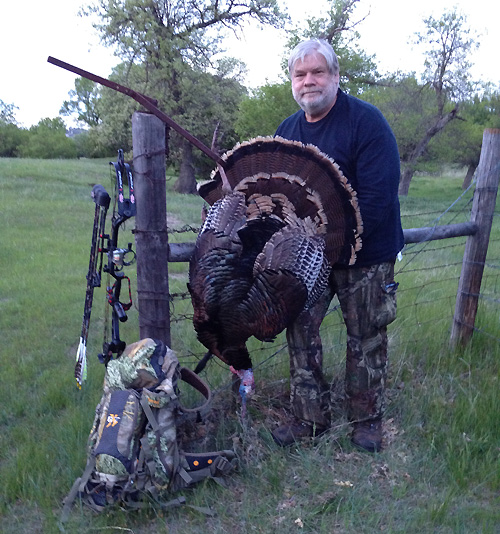 Fred used the Grim Reaper Whitetail Special and it put the gobbler down right in front of us. We watched ’em drop.  This Grim Reaper broadhead is a perfect all around head to get the job done on wild turkeys, whitetail deer, wild hogs and other big game. The 3-blades make a massive 2 inch wide cut that does maximum damage entering, exiting and everything in-between. Being an expandable head it flies like my field points. It comes packaged with a practice head and I checked my sights with it before I went into the Nebraska woods on my first hunt. To Grim Reaper

In Fred’s words, “I really like this new Tru-Fire release. The first thing I noticed about this release was it’s deep jaw. I like this feature for loop shooting. It is very quick loading for hunting. The deeper loop prevents slip offs too. The strap also caught my eye. It is thicker, wider, and build heavy duty. I like heavy duty. That’s a feature I like on all my hunting equipment.”  To Tru-Fire

ThermaCELL
This afternoon was the first time it was warm enough for mosquitoes to come out. When they swarmed their way into the blind Fred turned his ThermaCELL on and we were rid of the nuisances. Nothing gets rid of flying insects better. It is handy to carry with you and to start it up all you do is use the On button.  ThermaCELL

Fred has shot Carbon Express since their first arrow left the factory. The results show up on the range and in the field. Every wild turkey Fred has killed has been with a Carbon Express arrow. To Carbon Express

Fred said, “I set this bow up for deer season last year and it is the perfect choice for turkey hunting. It is fast and has a very flat trajectory. It is all black with black accessories. Sitting in the blind this bow disappears. It is easy and smooth drawing from a sitting position.” To PSE

In Fred’s own words:  “I use the G7 Day Pack. It is large enough to fit my cameras, tripod, binoculars, calls, extra jacket, ThermaCELL, water bottle and lunch. At first I wasn’t keen on all the extra pockets this pack has. However, I found a good use for each pocket and now know right where to go for what I need.” To Blacks Creek

This year, Shane Hendershot has his own turkey call company. Give his calls a try. They are working great for Fred this year. To Hendershot Calls

If you are going to turkey hunt with a bow consider a ground blind to increase your opportunity for success. The Dark Horse pop up ground blind is black on the inside and allows adjustments to the windows for shooting. If you video your hunts this is the blind to use. It is easy to adjust the window openings for videoing. To Primos Blinds

Clean Your Lenses with Carson C6