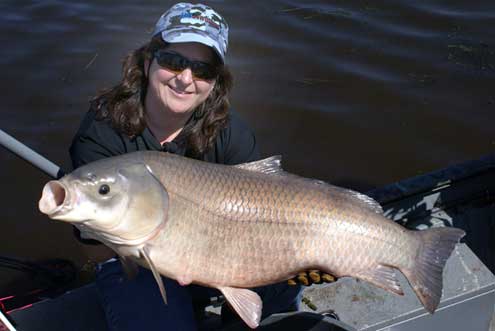 Author with fish in hand.

Non-typical combination right? Well not really when it comes to Alyssa Haukom, Jana Waller and me, Cindy Braun. We are all avid bowhunters and bowfishers so to get the three of us on the water for the Buffalo Spawn really didn’t take much persuasion. We just needed to set aside a week, so that we could plan the perfect day weather-wise within that week to chase the buffs and did we ever pick the perfect day!

I am always the instigator of these outings as I’m usually the one that hauls the boat out and loads it up so I called my friend Alyssa and told her that rumor had it that the buffs were going to be spawning in the next few days. She was fired up and asked if her friend and fellow huntress Jana Waller would be able to come along for the ride. “The more the merrier!” I replied. Getting a couple girls on the boat is always a hoot!

The two hadn’t been bowfishing in a while and Jana had never gone, so they were both extra excited about the upcoming days fishing. We met at a remote boat launch, I gave them the run down on the equipment and how to use it as the buffalo were working up the shallows. We couldn’t stand it! We got that boat off the trailer, loaded it up and were chasing buffs almost immediately.

The remote launch is basically at the end of a narrow channel that is quite shallow, stumpy, and weedy. I had to manipulate the boat with the trolling motor and we were flinging arrows at fish before we had even needed to start up the big motor. Generally, we head for the bigger water and sandy flats closer to the deeper lake, but today the buffalo were thick in this narrow channel!

The joke of the day was chocolate, for every fish we shot we had to have a chocolate celebration. Needless to say, the fishing was so darn good, there was really no time for chocolate. As one fish was hauled in, another pod was moving in and pushing a big female right toward the boat. Arrows were flying left and right, we were hooting and hollering in celebration of all the action that was taking place around us. Anyone on the shore line would have been entertained for hours at our antics on the boat? Hilarious!

I distinctly remember this one group of fish the female in the middle was just HUGE! She was the biggest fish we’d seen all day and they were coming directly toward the boat with a group of about 5 males trying to beat against her to release her eggs. Alyssa drew, aimed for the big one that was heading straight on toward the boat. She released, her arrow exploded, the big fish turned broadside and away and the arrow went the other direction in a smaller male. She came up short with what must have been the smallest male in the group. Anyone that bowfishes understands how this can happen. Sometimes it’s the biggest targets that lay broadside that we can’t hit while the smaller dinky ones that we really don’t want, we will almost never miss.

The females’ bellies were prime and super soft with eggs. The minute you brought one of them up and into the boat the eggs would just spill out of the fish and all over the boat and you if you weren’t careful. Jana shot a really nice female and really wanted a picture, so we were careful to gaff it and get the cameras ready. She hauled it over the side of the boat, held it up and was oblivious to the mess of eggs that was dumping out of the fish and onto her leg. The pictures and the smiles and laughter captured it all!

If you’re afraid of a little slime, gooey little eggs and a little fish blood, bowfishing is probably not for you. However, if you’re anything like us northern girls who don’t mind a little nasty, the memories you’ll have on the water with your girl friends or family will be priceless. This was a day I won’t be able to forget!

Remember, for the best in bowfishing excitement and equipment always demand: AMS Bowfishing