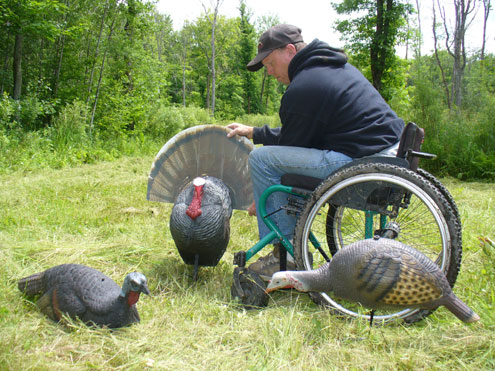 As we move from the winter doldrums to the colors of spring, if you’re like me you can’t wait to get your bow back in your hands. If punching paper or shooting 3D targets leaves you with an empty feeling it might be because you miss the hunting experience. The thrill and excitement of being out in the field, going one-on-one with nature. So what can you do in the spring to keep that hunting spirit alive?

I found something that has been traditionally a shotgun sport but with a little ingenuity it can be experienced with a bow. It is turkey hunting! Many states have a Spring turkey season and most of the equipment you have for deer will work for turkeys. Here in Minnesota we have eight, five days seasons in different zones for shotgun starting in mid April. This year the legislators passed a bill allowing a bow to be used the last four seasons anywhere in the state. Now that gives you 20 days to try and bag old Tom and by using a bow you’re going to need every minute of the new extended season!

When I bought my turkey tag, being a disabled hunter in a wheelchair, I was not sure how I was going to pull this off. Then a good friend, Brooks Johnson [former co-owner of Double Bull Blinds] said that he would take me out. This of course changed everything and I was now going to give this a whirl.

Brooks dropped me off in a little opening that had three logging trails coming into it. I found out later that turkeys like to walk on these trails. After unloading all the gear he drove the truck away. When he came back he set up the Primos Double Bull Darkhorse Blind and put out a jake decoy. 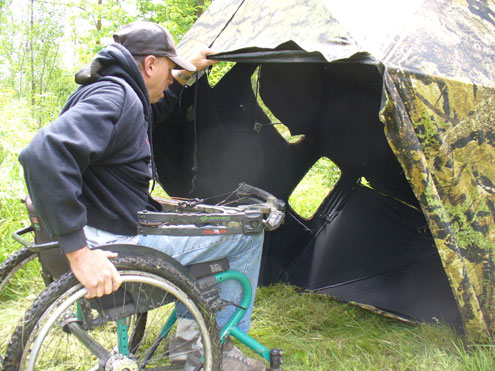 When all was set I rolled over he placed the blind over me, cocked my bow and I was ready to hunt. We could hear gobbling in the distance so we knew there were turkey in the area. As we sat a talked and occasionally looked out the window, Brooks would pick up his box call and give some seductive hen yelps to try and lure the old boy in. We heard gobbling most of the morning but no Toms showed. A hen came in and checked out the decoy but was not interested and walked off.

By 11:00 AM we felt defeated so we packed up and loaded the blind on the truck and headed for home. That night as I contemplated the days events, I started thinking that maybe I could do this myself.

I spent the next couple of days rehearsing in my mind how I was going to do this. So with all the planning I decided to hunt on Sunday morning. The alarm went off at 4:30 and I was up and got ready to head out on my maiden voyage. Turkeys may be the wariest critter on earth but they are not real smart. Unlike deer you don’t need to be quiet going in and you don’t need to worry about scent control. You can also set up a ground blind anywhere and hunt the same day. It doesn’t even need to be brushed in.

Just like I had planned, I drove to the spot and unloaded my gear. Then drove the truck about a 100 yards away and buried it in the brush. Using my all- terrain wheelchair I rolled back and set out a hen and a jake decoy. Moving back about ten yards I set up the ground blind and pulled it over me. Once inside I opened the windows, cocked my Barnett Predator crossbow and sat back and waited for the action to start.

I pulled out my slate call and gave some seductive hen talk and was answered by a Tom about 250 yards away. I really had him going as he gobbled continuously for five minutes at a time and then would take a break and restart all over again. This went on for an hour and half but none of my sweet music brought him in. He just kept pacing back and forth expecting me to come to him. At 9:30 I had a hen saunter in and give the decoys the once over. I thought here is my chance to do some calling and see how she would react.

I gave my best hen turkey talk and it must have been adequate as it didn’t seem to scare her away. If this had been a Tom it would have been a slam dunk. After 20 minutes she wondered off. I waited another hour or so and then decided to pack up. I folded down the blind, picked up the decoys and laid everything in a pile and rolled over to the truck. I pulled the vehicle over, loaded up and while driving home I kept thinking about what I had done. I actually did all of this by myself just like the old days. What a sense of satisfaction and accomplishment. I did not have to rely on anyone else, just myself. Although I did not bag a turkey on this day, the whole experience was very fulfilling.

With a little planning anyone can execute a turkey hunt alone even if you are disabled like me. I was left with a warm feeling of satisfaction, self-reliance and new found confidence. I am already looking forward to my next hunt. The bottom line: I did this on my own!