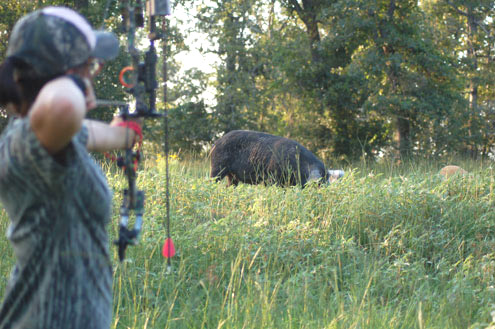 Meagan Balette, daughter of well know Texas bowhunter Mark Balette with B & C Outfitters, is about to harvest some prime pork with her bow. photo by Luke Clayton

I’ve been infatuated with backwater streams since childhood days when I would slip off our farm in northeast Texas and spend hours fishing, hunting and just enjoying the sensory overload of natural sights, sounds and smells along Pecan Bayou. There is something very special about floating in a small boat through a neo-tropical hardwood bottom where beaver, wood ducks, deer, wild turkey and WILD HOGS live and die without ever catching sight of a man intruding their world.

Through the years, I’ve spend a good bit of time these days hunting and fishing at The Big Woods, a 7,500-acre piece of remote bottomland heaven located a couple hours south of Dallas. The Big Woods is bounded by the Trinity River and Catfish Creek and between these two watercourses lies some very remote real estate and enough wild hogs to feed a small army!

When Dr. Bob Mcfarlane called and invited me to go on a float hunt for hogs in the backwaters of Catfish Creek, I was making plans before the cover snapped closed on my cell phone!

Catfish Creek was pushing a gentle current the day of our trip. I tossed a stick into the water and it moved along at just the right clip. We would be able to float silently through the wilderness bottoms and, hopefully, slide up close to feeding hogs without being detected. I’ve learned that if one remains still during one of these floats, wild critters pay little attention. I’m sure they think the boat is just another piece of downed timber gliding through their world.

Since wild hogs feed on acorns and soured hickory nuts throughout the day, we launched our little craft early in the afternoon and an occasional paddle stroke kept the boat’s bow pointing downstream. The hogs we would be hunting certainly weren’t patterned to a corn feeder on a timer; they made their living the natural way, on the abundant mast crops and tubers that grow along Catfish Creek. This was going to be a leisurely but, as I was soon to find out, exciting float trip.

We launched the little Jon Boat at a makeshift ramp. We were traveling light with only a day pack that contained the necessary items for field dressing the porker we hoped to harvest and a cooler which contained some home made summer sausage, cheese, crackers and water.

Once we rounded the first bend of the creek, I came to the realization that we had just left what the human race knows as “civilization.” We were gliding effortlessly through a world that was ruled by the law of tooth and claw. Doc pointed out a ‘slide’ where alligators entered and exited the stream.

The remains of what appeared to once have once been a deer was lying on the forest floor. Just a few scraps of hide and leg bone but it had definitely been a whitetail. I wondered if a mountain lion took the deer down, or was it killed by a pack of coyotes. Hog wallows were a frequent sight and at times, I could actually detect the unmistakable scent of hogs in the shallow depressions along the edge of the creek.

There was no doubt we were already in good hog country. The thick, brush lined creek channel we entered was opening up into a big, flat hardwood bottom. The watershed received a couple inches of rainfall the day before and Catfish Creek was out of its banks; the adjacent hardwood bottoms were covered with a foot or so of water. Hogs would be concentrated on the little points of high ground. My excitement grew with the ever changing vista around every bend in the channel, and the serpentine route of Catfish Creek presented many new opportunities for looking ahead at totally undisturbed country.

As we rounded a sharp bend, an eight-point whitetail buck made a couple of bounds and was out of sight. I marked the occurrence in the recesses of my mind. This floating for hogs could also be a highly effective method of hunting deer this coming fall. I noted the critters we were encountering seemed much less spooky than those that are hunted in more accessible areas.

With a strong current around the creek bends, Doc was kept busy keeping the little boat’s nose pointed downstream. Just as we approached a sharp bend, the current pushed the boat alongside a downed treetop, the scratching sound caused a monster boar to get to his feet and make tracks for the timber. The big black hog was no more than 30 yards from us when he spooked and for a second, I thought I might be able to take him. As luck would have it, the boar took a sharp turn to the right just before reaching the little opening. I could see his ivory cutters protruding from either side of his head as he bounded through brush, leaving a spray of water two-feet high in his wake!

“If that won’t get your adrenaline going, nothing will,” kidded Doc.

The current pushed us along for what we hoped would be another close encounter. I vowed to be ready next time.

It’s amazing just how fast a big, heavy boar can transition from a resting position into high gear in the blink of an eye. We floated the next couple miles without sighting a hog. We did hear them squealing back in the brush on a couple of occasions. Near the end of our float, about half a mile from our take out spot, another nice boar, this one black with white shoulders, bounded up from the creek’s edge on the right side of the boat. Like the black hog, he didn’t present a clear shot.

Doc decided it was time to nose the boat up to the bank. We left Big Woods planning another float for hogs when the creek was within its banks. Doc has floated this section of his ranch on many occasions and says he has never failed to see hogs.

“It’s not uncommon to get within bow range of twenty or thirty hogs on a float when the bottoms are dry,” he said. I am watching the weather closely and have my Mathew’s Helim and a quiver full of Innerloc 100 grain EXP mechanicals at the ready!

Listen to Outdoors with Luke Clayton radio at www.catfishradio.com. Email Luke via the web site with outdoor news from your area.