by Bob Robb
in Bowhunting Posts
0 0
1 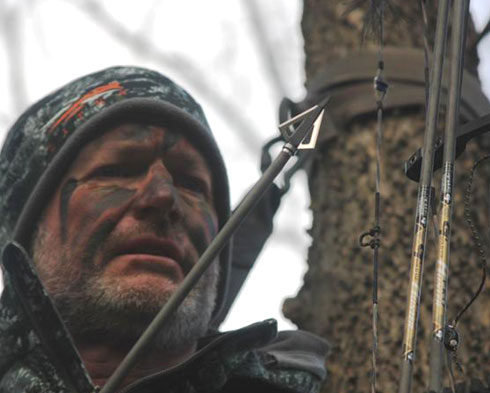 Thunderhead 125: The NAP Thunderhead has been around for more than 25 years, yet remains one of the country’s biggest sellers.

In my little home office is a very small collection of ancient broadheads crafted from obsidian and flint by hunters who had much more at stake when it came to sneaking within arrow range of a bird or mammal than we do today. I’ve stumbled across them from time to time as I have traveled the country to bow hunt big game with my modern archery tackle, and each time I do they send me off daydreaming about those who came before us. Upon reflection, one can see that broadheads have really not changed all that much through the years. For example, you can find three-bladed broadheads made from metal that date back to the Bronze Age, some 3000 years ago; a design very similar to the Trocar tip popularized by Muzzy was built in the 14th century. Its function was to penetrate the chain mail worn by soldiers.       It wasn’t all that long ago that bowhunters were shooting what were, by today’s standards, large, heavy broadheads that impeded arrow speed. Traditional-style, fixed-blade heads have a lot going for them, though. They are built from one-piece construction featuring a main flat blade generally made from welded steel and are incredibly strong. Their cut-to-tip design fosters deep penetration, and the combination of heavy head weight and relatively heavy arrow shafts with their bullet-proof construction and razor-sharp edges help them penetrate deeply and crack even the heaviest rib bones.

Bowhunters using longbows and recurves still often choose traditional heads like those from Zwickey, Delta Industries, Simmons, and others that need to have an edge put on them. Examples that are readily available include the many old favorites, including the Zwickey Black Diamond and Black Diamond Eskimo, Bear Razorhead, Delta Rothhaar Snuffer and Nubbin,  as well as modern versions, including the Simmons Land Shark and G5 Montec, among others.

The old traditional broadheads often weighed upwards of 160 grains, though modern versions can weigh as little as 100 grains. Perhaps the biggest downside is using any of these heads for the modern bowhunter is the fact that their blades must be hand sharpened, a basic woodsmanship skill that most of you in the younger generation were never taught.

It was the need for consistently razor-sharp blades that spurred the development of the most popular style of broadhead used today, the replaceable-blade design. Many of today’s bowhunters have never known a time when this style of head was not available, but the basic concept dates back to the 1950’s, when innovative California bowhunters like Jim Dougherty, Jack Doyle, and Duke Savora experimented with gluing razor blades from their shaving kits to the three most popular broadhead styles of the day, the fixed-blade MA-3, Bod-Kin, and Hill’s Hornet.

The technique became relatively common in the region, and was a precursor to today’s popular replaceable-blade designs. Doyle began marketing the Zia Scorpion, which was the very first razor-insert broadhead, as well as blades for the glue-on process, in the early 1960’s, advertising both in the now-defunct Archery magazine. Duke Savora’s Swept-Wing broadhead, introduced in 1974, was the first mass-produced insert-style head that used replacement blades designed specifically for broadheads. It helped set the stage for the well-designed replaceable-blade broadheads that dominate the contemporary market.

If bowhunters are one thing, it is that they are tinkerers. Looking back, it now seems that what we once thought was off-the-charts radical – the mechanical broadhead – now seems a natural progression that came about by those trying to achieve increased terminal performance and, above all else, accuracy. Though I have never had a problem tuning even a fast compound bow with a replaceable-blade broadhead, some shooters do, and so they began turning to mechanical broadheads that have nearly identical flight characteristics as field points.

To be blunt about it, the first mechanical broadheads basically sucked. They had all sorts of design flaws, were flimsy, and didn’t always perform as advertised. So many bowhunters were disappointed with them that for a brief period their future was in doubt. Today, of course, mechanical broadheads have evolved to a point where the best are easy to tune, are strong, have razor-sharp blades, and can penetrate as deeply as the best replaceable-blade styles, and their popularity has soared.

Choosing a broadhead is a very personal thing. People often ask me which are best, and my answer is always the same: “What do you like best, blondes, brunettes, or redheads?” The answer, of course, is “Yes!” If you keep in mind that a broadhead has one function, and one function only – to cut a hole through hair, hide, muscle, and internal organs – and that to do so it must be strong enough to withstand some serious abuse and designed so precisely that it can be made to fly like a laser beam – you can now eliminate the cheap stuff and choose from one of dozens of broadheads on today’s markets with confidence that fits both your equipment and your personality.

Last spring I was turkey hunting in northern Arizona. Walking along the banks of a creek something caught my eye. I stopped and looked again, trying to figure out what it was. There! The angle of the sun was such that it briefly glinted off something shiny. Reaching down I found it was an ancient obsidian broadhead, one about the size of a 50-cent piece and still in perfect condition. I walked down to the creek and, when I washed the mud off, was mesmerized by the way the sun shined off the angles knapped into the sides of this ancient tool.

It was mid-morning and the gobblers, for the moment, had given me the slip, so I sat down against the trunk of a giant oak to rest for a while. I bet I turned that broadhead over in the palm of my hand a hundred times, and as I did so I wondered. Did the hunter who carried it afield have success the day it was lost? Did he simply drop it from a small leather bag or was it shot at a deer or a rabbit? If so, did his arrow hit its mark? Was he young, or old? Was he a skilled hunter, someone able to provide a regular feast of meat for him and his family? Was he able to teach his own sons the secrets of the hunt as my own father and grandfather had for me?

The broadhead is the ultimate connection between the bowhunter and his prey. We all understand how difficult it is to get a controlled, close-range bow shot at an animal. When we do, the success or failure of the day is totally dependent on whether or not the broadhead does its job. If it does, we whoop and holler and give thanks to the stars above for our good fortune. If it fails, at best we eat tag soup; at worst, we wound a magnificent game animal and return to camp in shame.

Perhaps this is why broadheads fascinate me so.
Previous Post