by Engee Potgieter
in Bowhunting Posts
0 0
A A
2 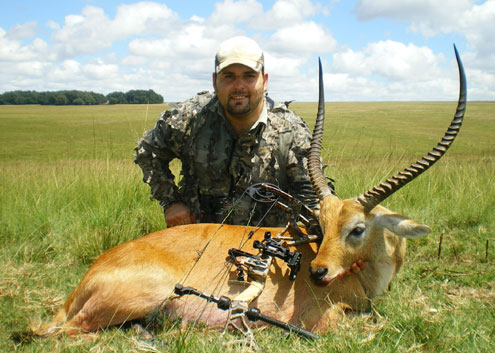 It was an awe inspiring sight, looking out across the vast plains as flat as a billiard table with literally thousands of Kafue Lechwe as far as the eye could see. Herds so big that the clouds of dust kicked up by their hooves darkened the sky and left us looking at them whilst standing in the shade on the incredible Lochinvar flood plains.

I felt small and the bow in my hands felt even smaller, I was told that I was nuts to even contemplate going after Kafue Lechwe in Zambia with my bow and standing there right then I was thinking they were right.

I had no idea of how I was ever going to get close enough to launch a carbon arrow, the incredible mass of moving bodies and multitude of horns against the skyline was making even picking out a suitable bull an impossible task.

I had the privilege to travel to Zambia with good friend and fellow hunter Randy Westraadt and was hoping to try stalking both Kafue Lechwe and Puku. I had spent the few months leading up to the hunt researching in the hopes of finding other hunters who had successfully taken Kafue Lechwe with bow and arrow.  I couldn’t find anything so I merely continued with diligently practicing at ultra long range as I was sure that any chance I might get would be at the very limit of my abilities as a bowhunter.

The tactic I looked to try once in Zambia was to single out a small contingent of Lechwe that had a good bull in and widely circle the herd, all the while ever so slowly moving closer without them hopefully becoming spooked and allowing me to get close enough for a shot. This actually worked to some degree and had gotten me closer than 200 yards of a few bulls on a couple occasions, but any closer and they would take off to the security of the water. I did however get to arrow a mature Puku a few days later but returned home after a week without a Lechwe, so after having to admit defeat in Zambia, Lechwe was always in the back of my mind and I was looking forward to some retribution.

I finally found the opportunity to arrow a trophy Lechwe early in 2008 when I had booked a hunt with Nico Fick just outside of Piet Retief in Mpumalanga.

Although the Lechwe in South Africa are a sub species to the Kafue in Zambia they looked and acted very much the same.  Nico also had an incredible number of these graceful antelope and the terrain on his property was ideal for stalking.

Although a non indigenous species here in South Africa the Red Lechwe has adapted very well and is quite at home on the open plains so typical of Mpumalanga, the Freestate and regions of the Eastern Cape. Originally from Botswana they form part of three sub species recognized by Safari Club International, the other two being the Kafue Flats Lechwe found in Zambia and the Black or Nile Lechwe that calls Sudan and the western regions of Ethiopia home. A stocky built antelope standing just more than 110cm at the shoulder and adult bulls tipping the scales at about 120kgs, they are very tough animals that have adapted to living in tough swamp like or marsh areas, often taking to the safety provided by water when danger presents itself, being the most aquatic antelope after the Sitatunga.

Although they may seem ungainly on firm ground because of their hindquarters being higher than their shoulders and judging by the unique way the big bulls run with their heads held low to the ground, they are actually far from it and are fortunately for the hunter just as home on terra firma as they are in the near inaccessible marshes. They are often found grazing in great numbers on the short grassy plains close to these waterways.

As mentioned there are good numbers of these handsome antelopes in South Africa and they are very popular with trophy hunters across the world as Lechwe are very attractive antelope and their long sweeping lyre shaped horns make for most spectacular trophies. Known for forming incredibly large herds as is especially the case with the Kafue Lechwe in Zambia they do also break away as small family groups with one large bull in attendance and bachelor herds of up to twelve bulls of varying ages. Some bowhunters have been successful by using a pop up blind that has been set up near popular grazing areas or traveling routes, but this requires time scouting the herds to determine traveling routes, but it is none the less a viable option.
Arriving on Driefontein early the morning of my hunt, Nico and I took some time to drive around so he could show me his 2000 hectare property and we could look for a good bull, of which there happened to be no shortage. I was keeping an eye out for a group that was in such a position and would give me the gap to get in close enough for a shot.

We soon found what I was looking for, a small bachelor group lying down on the gently sloping hill just adjacent to a thick stretch of Black Wattles. Using the wattles as cover I could skirt around the edge of the thicket using the high summer grass to my advantage in getting within shooting range. The strong wind and tall waving grass should be perfect concealment.

This was before I had discovered the necessity of wearing my HECS STEALTHSCREEN but I quickly put on my leafy camouflage top and grabbed my bow whilst Nico drove to a distant hill where he could keep an eye on the whole stalk. The initial going was easy as there was a lot of cover to keep between myself and the herd of bulls but as soon as I had gotten halfway around the clump of wattles I had to go down on all fours to remain undetected.

The small group of bulls were peacefully lying in the early morning sun, chewing the cud so I took my time getting closer. Although the tall grass was a blessing when stalking, it was making getting an accurate distance reading with my rangefinder difficult. In order to get a good reading I had to stand up out of the cover and as soon as I did one of the bulls spotted me, causing them all to stand. This was actually a blessing in disguise as I could now carefully pick out a suitable bull and by standing the particular bull I was looking to take presented a larger and unobstructed target to his vitals.

Fortunately the majority of the group did not seem too startled as the only one that was looking in my direction was the initial bull that spotted the movement.  I knew I still had to act fast as I feared the others would sense the sentry’s uneasiness, so nocking an arrow I carefully sneaked closer a few yards. Kneeling between the long stalks of thatch grass right on the edge of the shorter grass of the open ground I slowly drew back and anchored, finding the bulls in my peep sight I was mentally willing the closest bull to move out of the way of my shooting lane as he was squarely blocking the vitals of the bull I was hoping to arrow.

I was remarkably steady as I knelt there waiting at full draw, whilst the wind was whipping the grass around me. Finally the closest bull took a few steps toward another bull, exposing the bulls shoulder behind him. Allowing for the wind I settled my small pin low and tight behind the shoulder. Aiming for the point of the offside shoulder I lightly touched the trigger and the shot suddenly broke, sending the 550 grain arrow arching across the 64 yards to the unsuspecting Red Lechwe bull.

As I released I immediately noticed that the wind had a much more pronounced affect on my arrows trajectory than I had anticipated. The strong wind that was quartering toward me from my right caused the arrow to impact lower and a little further back behind the bull’s right shoulder than I had wanted. Although playing havoc on my arrows flight the strong wind did deafen the sound of my shot and the group of bulls did not at all react alarmed. As the bull I had aimed for received the fatal arrow they calmly trotted off down the slight slope and out if sight.

I exchanged my bow for my binoculars to confirm my initial suspicion of where the arrow struck. Although not immediately fatal the affects of the arrow passing effortlessly through the body cavity and slicing through the liver quickly started to take it’s toll as the bull I had shot soon broke away from the group of seven and headed up a shallow depression toward some distant cover in a larger black wattle thicket. Nico agreed with me that although the bull was hard hit I wanted to try and get in for another insurance shot as soon as the bull settled down.

I took some time for the bull to stiffen up and slowly walked in the direction of the wattles that held my trophy. Twenty minutes later I was crouched behind the scant cover provided by a tangle of branches of a fallen wattle under the dappled shade the thicket with my Lechwe in sight just a few yards away. The cover was  unbelievably thick and although the bull was only 24 yards away there was but one small gap to shoot through.  I would have to thread my arrow through a rather small opening about three yards from the bedded bull in order to place my arrow high and behind the last rib on the left side of the sharply quartering away bull.

A quick second glance with my Leica’s assured me that there weren’t any other unseen twigs that could blow my shot so I slowly drew and carefully moved out from behind my cover. As soon as my bright red pin settled on the chosen spot, I sent the arrow toward the bull. It connected an instant later with a loud “thwack!” as the 100 grain Muzzy came to a shuddering stop against the far shoulder. The weakened and fatally wounded bull stumbled out of his bed and breaking through the cover went down about 40yards away. He was down for good and by the time I leaned my bow against him all the life had drained from the beautiful bull.

He was in prime condition with a beautiful unscathed coat and very handsome set widely splayed horns. In retrospect I would like to think that my first shot would have been right on the mark had I been using a higher poundage bow with heavier and smaller diameter arrows, as that would be better suited to the type of hunt I was on, but regardless, the 70-pound bow I used on the day did serve me well and I was thankful that I could quickly follow up on the already hard hit bull and put in a second finishing shot.

After we loaded the bull on the bakkie I was delighted at the successful conclusion of an enthralling hunt and being able to finally close my personal chapter on Lechwe. Hopefully one day I will go back to Zambia to try again for my Kafue Lechwe.