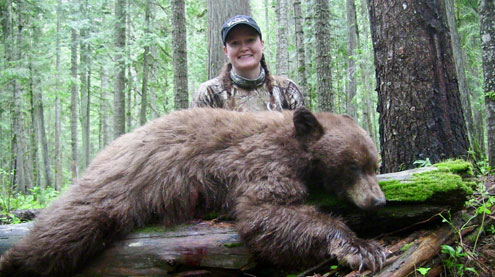 To really appreciate this story, I need to begin with my 2011 hunting season.

In May 2011, I went on a 10 day bow “Huntingmoon” with my husband Chris to South Africa. I harvested 6 plains animals and had a wonderful time. We returned to Montana in June and I was ready for antelope season! August came and went without an antelope for me.

Then September brought elk and deer season and I drew an extra elk tag and the extra whitetail tag for river bottom bucks. I was so excited. My husband started using up all his tags while I was still struggling for one harvest. Time after time, I would see a deer coming to me then it would turn and run away. My 2011 hunting season ended with a big bowl of tag soup…7 whitetail tags, 2 elk tags, 2 antelope tags, 1 wolf tag and 1 turkey tag. I felt like I had a voodoo curse put on my when I left Africa!

During elk season my friend harvested a really nice elk and I went to help him pack it out. I noticed he was wearing a suit that kinda looked like pajamas. He told me all about his HECS STEALTHSCREEN suit and that he felt it really worked. He said all living creatures produce an electromagnetic field that other animals can detect. I’m no scientist but it sounded right to me. He said that the HECS STEALTHSCREEN was designed with a special carbon material and woven is such a way that it prevented these fields from going out and being detected by the game. Plus, he said, it was really comfortable. So HECS was like those shields in Micro Wave Ovens. OK, it all sounded good and the massive elk on the ground was enough proof for me. After the year I had had I started recounting how many times game started in only to start acting flighty before most just took off. Maybe there was something to this HECS thing after all. With all the preventive things we hunters do from camo to scent control and more if this product could help, why not use it?

2012 brought bear camp in Idaho. This was the first time we had hunted in Idaho and my brother in law and another friend drove out from Wisconsin to hunt with us. Eight days into the hunt and I was still without a bear on the ground. My husband says “Maybe you should wear your new HECS suit tonight since it’s the last night of the hunt.” I had bought a HECS suit but I just forgot I had it. Go figure. So I ran back into the camper put on my new suit and some war paint and went to the tree stand. The final hour of the hunt and I was feeling so bad I couldn’t stand it, eight days and I was going home without a bear! Now I knew I was the victim of some VooDoo Curse.

It took me a couple of seconds to come out of my stupor and realize it was a chocolate bear coming in. My heartbeat starts ringing in my ears and I can’t even hear myself breathe. The bear walked toward us then makes a sharp u-turn and goes the other way! I’m thinking, ‘Oh no, not again; stupid suit doesn’t work’.

Then the bear stopped at a grassy spot, smelled it and then turned and proceeded to come back toward us. He walked right by our tree and stopped just before he got to the barrel, right behind a tree leaving me with a 13 yard shot. I leaned against the tree as far as I could and let the Heartbreaker fly. My Simmons Shark broadhead goes straight through the bear and landed on the other side of the trail. It looked like a perfect hit.

The bear turned and ran off up the mountain and my heart finally came back down out of my throat. I was so excited I was ready to jump down and go after my bear right then but it was getting dark quickly so we decide to let him sit till the morning.

The next morning I couldn’t wait to get after my bear. We rafted across the river, headed up the mountain and spread out to search for my chocolate. Luckily I was the one who came across the bear in the last place I had seen him the night before. It was a fatal hit and he hadn’t gone far before bedding down under some pines.

Redemption, finally! After the disappointing previous season I had filled my tag. VooDoo curse or not, I truly believe the HECS suit worked for me and I will continue to wear it on all my future hunts. I really think HECS rounds out all I do to ensure a good, successful hunt.

If you are interested in finding out why HECS works just go to: HECS STEALTHSCREEN