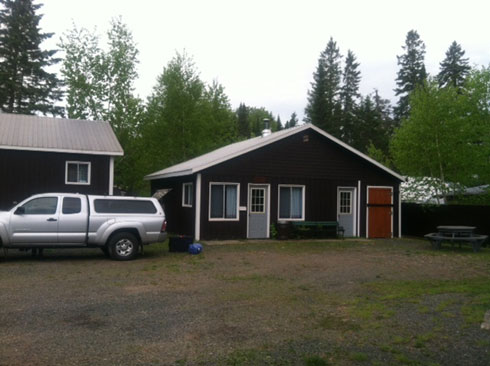 One of six cabins where we'll be staying next spring on our annual spring hunt.

Sleep didn’t come easy last night as I kept replaying the events surrounding the shot in my mind. It’s amazing how fast that bear moved at the critical last second when my arrow was being released, and at the same time how the whole thing now plays in slow motion in my mind.

Could I have done anything differently? Of course I could! I could have stood up for the first shot rather than trying to shoot through the hole in the blind. I would have had better light 10-15 minutes earlier, and the bear wouldn’t have been on “red alert”! All these things would have contributed to a much better shot, but you can’t turn back the hands of time by asking for a “do-over”…..as much as we’d all like to sometimes.

I’m sure we ate another fine breakfast this morning, but to be honest I can’t remember it. All I thought about was getting out to my stand to see what we’d find. It was a short ride, that took forever, and we finally got to my bait site. All the chocolates were gone so the big three legged bear must have returned after I left. No matter, I’m leaving in a few hours and we have more important things to think about at the moment.

I watched the big boar run off for several yards before the forest swallowed him up, but I had a very good idea in what direction he was going from that point by the sounds of crashing trees. There was no blood trail, but there was a very well beaten bear trail heading in the right direction… going into a huge swamp. We started down the trail slowly looking for any sign that would confirm a good hit. I already knew it wasn’t good, but at this point in the adventure one only has hope left on his side, so I was hanging on to all I had.

After less than forty yards we found my arrow confirming we were on the right trail. The arrow also confirmed that we’d not find my bear. There was no blood on the arrow and the badly damaged broadhead was still attached to the end of the shaft. The penetration had been minimal which could only mean the arrow had been stopped short by the massive leg bone. To a 350+ pound bear this would amount to little more than a bee sting! Certainly it was less damage then inflicted during regular scraps with other large bears in the area over the pecking order at the bait sites.

While it was a great relief to know the bear had not been seriously wounded, and would be back to challenge another hunter someday soon, it was disappointing to know that my chance at a bear of a life time had slipped through my fingers. We headed back to camp.

With a very long drive ahead of us, Ray and I packed quickly and loaded my truck for the ride home. Before leaving I had a long discussion with Mike. He seemed to understand how I could have missed under the circumstances, and was relieved that the bear was OK, while at the same time disappointed we weren’t taking “hero” pictures my the skinning table. That’s hunting! He was also impressed that I had stuck by my original commitment and only taken a shot at the huge bear. From there the conversation went “downhill” however. I had heard a rumor the day before that the week we had reserved for our second “Annual Tag-A-Long Spring Bear Hunt” was no longer available. Joel told me this when he and his father tried to rebook the same week for next season before leaving yesterday. Ray confirmed the same information he was given last night while I was still on stand. As I projected, if the hunt went as planned everyone would want to come again, and bring friends, which I why I had discussed reserving the same week every year.

My conversation with Mike confirmed the rumors; I had no reservations for my group at this camp for next year! Then it got worse. Mike told me that he only had one opening left in this camp for next year and it was the second week. If I wanted another crack at that bear I’d have to book right now, ride alone, forget about joining my clients, and hope that he didn’t let anyone else hunt that bear before I got there (next week, this fall, or next spring!).

He did offer me eight spots in his other camp for next year, but told me I’d have to have a full deposit in for all eight spots with-in a week or it too would most likely be gone. The final straw that broke “this” camel’s back was when Mike told me he didn’t intend to honor the arrangement to pay commissions on any of my guys that re-booked for next year…. Although I’ll never make a living as a hunt consultant, I do expect to make a few bucks for my effort! Also, those commissions contribute to paying for my own hunting adventures!

So much for a year’s worth of planning! At least my clients got a good hunt!

EPILOGUE: On the ride home I was able to connect with Dave Winchester, who owns/operates the camp Ray and I checked out on the way up north. Dave has had very few clients the last few years, with none this spring, and is very interested in providing a quality bear hunt for our second Annual Spring Bear Hunt next season. We worked out most of the exciting details over the phone, but I’ll be going back in a couple weeks to spend a few more days in camp and finalize all the arrangements. We’ll be riding the country checking out bait stations and stands and finalizing a contract where Tag-A-Long will be the exclusive booking agent for his bear hunts.

Dave will only take twelve hunters in the spring and four in the fall in order to maintain high success rates on trophy quality bears. The plan right now is for next year’s spring “Tag-A-Long Hunt” to be a two week deal with six clients joining me for each week. I’ll personally be in camp to assure that all goes well and to document the excitement for a daily hunt report. Dave has four openings this fall if anyone is interested, and I’ll be going up this fall to try to get a big boar to life mount in the trophy room. For more information on hunting either this fall or next spring email me at roygoodwin@comcast.net.

Fire On The Mountain 3D Shoot