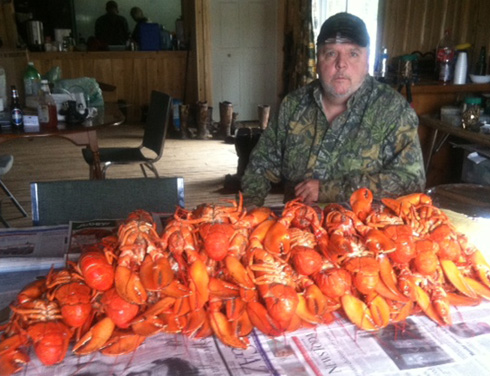 We woke this morning to something strange, sunshine! After another hearty breakfast it was time to swap lies and share pictures while we waited for dinner. If we were fisherman we’d be out front trying our luck, but there wasn’t a fisherman in the group.

Mike headed to town to get more gas and supplies. Maureen is always busy getting food ready, and Ken went and baited stands. The rest of us were in relaxing mode.

Last night Mike showed me the trail cam pictures from the week before we arrived at my stand. One of the bears I saw last night has a distinctive coloration on his nose and I was able to pick him out in the pictures. His buddy was also in the pictures and Mike confirmed my impression that they were a little better than 200 pounds…nice bears! But there are two much bigger bears in the area. The trail camera proved it!

There is one with a light muzzle and another with a very dark face. Both are considerably larger than the ones I saw last night, and the dark faced one is the larger of the two. They both are about the size of Ray’s and Joel’s bears which means well over 300 pounds! That will keep me at full alert this evening!

After another hearty mid-day meal Mike brought me out to my stand. Kenny was taking Jaun, and we both had “high hopes” that the sun and warmer temperatures were going to help get the bears moving early. I had a tough night on stand! The bugs were brutal! I had a new Thermcell and was confident that it was going to protect me. As a result I didn’t bring any repellant, and also didn’t tape down my head net. To make matters worse, due to the heat I didn’t have my rain jacket and hood on. Bad mistake!

I learned some valuable lessons tonight that I’m going to take a couple minutes to share. Hopefully they will keep some of you from suffering like I did this evening. One can only hope!

First, never leave camp without insect repellant in your pocket, I don’t care what else you plan to do for protection!

Second, either wear a hood or a hat with a full brim under your head net. If you don’t the mosquitoes will be able to bite your ears and parts of your face and neck right through the head net.

Third, put a fresh repellant pad in your Thermocell each day (the one that was in mine for about a week just didn’t work and the bugs had their way with me until I broke down and replaced the pad with a new one. Fifteen minutes later I couldn’t find a bug and life got a whole lot better!

Lastly, If the bugs are getting you, stop and change things quickly to get some protection/relief. I let them beat me up way to long waiting for the Thermocell to start working before I tossed on a hooded jacket, and changed the pad…..my ears are swollen twice their normal size and my neck is like hamburger!

Ok, back to the hunt. It was just before 7:00PM when BooBoo arrived for his evening meal. He was fun to watch, but I kept a watchful eye out for the bigger bears that I just knew would show any minute. They never did! That’s bear hunting!

Kenny picked me up and informed me that Juan had gotten his bear. Kenny was with him so they already had it back at camp. It was too dark when we got back for pictures so I’ll take them in the morning and forward with tomorrow’s report. I’m the only guy in camp with an unpunched bear tag….but there is still time.