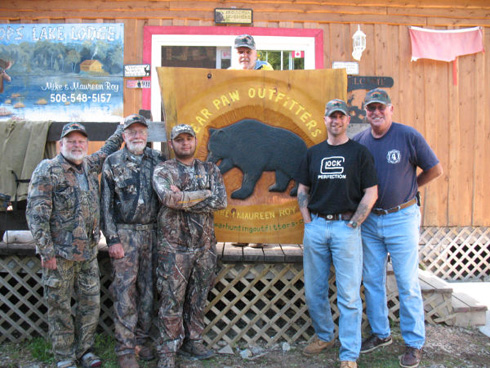 I won’t bore everyone with all the details of the last couple days, but I do want to share some highlights. My old hunting buddy Ray Moulton decided to join the group and got to my house the night before we were leaving to head north. We hadn’t hunted spring bears together in almost twenty years, and were both looking forward to sharing a spring bear hunt adventure. Due to medical problems, Ray can no longer shoot a bow so he’d be dragging his cross bow along for this trip. While I’m not a fan of cross bow use in archery seasons over-all I have no problem with their use by people who are honestly handicapped to the point where it is impossible to draw and release a bow, nor do I have a problem with their use in seasons open for all types of firearms.

My group was a “mixed bag” of archers, gun hunters, and Ray with his cross bow. One of the gun hunters was using a slug gun and the other was using black powder. Hey, whatever “floats your boat” so to speak, we were all going to have a good time.

We pulled out of the driveway at 7:00AM as planned and headed north in the middle of a rain storm that was forecast to last 3-4 days. We hoped we’d get far enough north to get out of the storm front because neither of us wanted to shoot a bear in the rain (blood trailing is just too tough in the rain!).

The plan was to drive about eight hours and stop at another outfitters camp to check it out. We were also going to pick up some “special” bait, and do a little four wheeling to look over the county. The camp and area looked super and Ray and I each would have been glad to stay and hunt here!

We had a great afternoon riding around the country then re-loaded the truck to fit in the barrels of bait before sitting down to a fine dinner. Morning came too quick and we were on our way again. We had to get about three hours further north to the meeting spot in Bathurst where we’d meet the rest of the group and Mike. We got there ten minutes early and with-in twenty minutes the whole group was assembled. From here it was another one hour ride following Mike to the camp.

Getting to camp was a pleasant surprise, the full service camp is extremely comfortable and sits on the edge of a beautiful lake. You can look out the bay window and picture moose appearing across the lake in the morning. 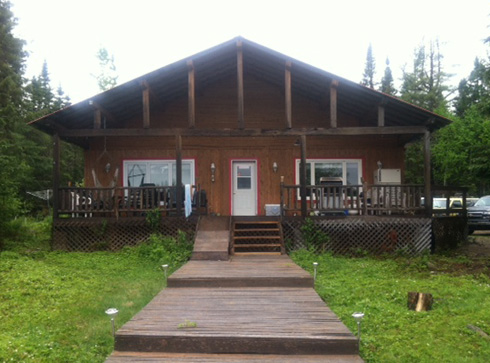 The spotting scope set up in that direction confirms that it is not uncommon to watch moose from the cabin. The trophy collection in the living/dining area is impressive, and just what we all needed to get even more “pumped up” for the hunt. Sunday hunting isn’t allowed so today the plan was to get settled in, rest, and do the license thing.

After getting settled in we were treated to a fantastic turkey dinner (Mike’s wife Maureen is a great cook!), topped off with freshly made cake for desert. Obviously we won’t loose any weight on this adventure! Just before crashing for the night we got a quick run down of the camp rules and watched some every enjoyable video footage of bears at bait sites. The purpose of the video was to help us all understand exactly what to look for in a trophy bear. While Mike will let you shoot anything but a sow with cubs, he encourages everyone to hold out for a good mature 300+ pound bear.

In the videos we were also able to see that the way the baits are set up there is ample time to wait for just the right shot angle to help avoid poor hits. Mike baits primarily with oats soaked with various flavorings (can’t let out all the trade secretes) so the bears can’t grab something and run. This forces them to stand there with their head stuck in the barrel if they want to feed. Once the bear settles down, and starts to feed, he’ll spend a lot of time with his head stuck in the bait barrel. This gives the hunter an opportunity to draw without the bear seeing anything, and even helps avoid the bear detecting sound. The video footage of a dozen or more bears taken at his bait sets is proof positive that Mike’s system works.

We are all going to bed excited. I hope you all join us tomorrow when the real fun begins. See you then.

New from Rack One

The Drone from Ol’ Man Treestands

The Drone from Ol' Man Treestands