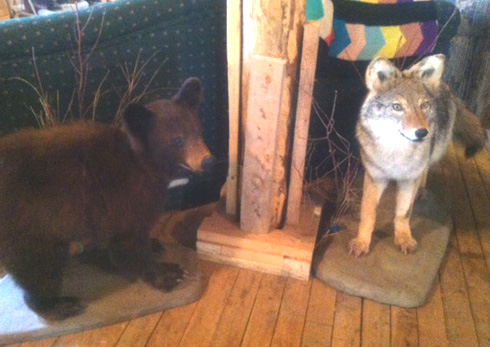 We woke this morning to weather that was less than ideal. It was cold and damp with rain a definite possibility. After the solid breakfast of bacon, eggs, home fries, toast, and coffee it was time to make sure all weapons were properly sighted in. Then the waiting game began. It seemed like forever before dinner was ready at noon. Some of the time was spent sorting gear, packing, and then re-packing day packs.

A very pleasant half hour was spent watching a cow and calf moose feeding along the edge of the lake from the front cabin window. We also got to know each other a little better while playing cards and snacking on fresh little neck clams and smoked blue fish thoughtfully brought along by Joel DeRoche. This made a great appetizer for the roast pork dinner served by Maureen.

The “crew” was made up of Ray and I from central Mass, Joel and his dad Richard from Martha’s Vinyard, and Jaun Sanchez from Texas. Juan and I were bowhunting, Ray had his crossbow, Joel was carrying his black powder rifle, and Richard is using his trusty 12 gauge.

After dinner it was time to gear up and pack the trucks to be taken to stand. We left camp at 2:00PM and the plan was to be dropped off and then stay on stand until 10:00PM. The guides were bringing us to stand and walking us in. As we got up in the stands they baited the barrels. This way if there were bears around it sounded like they were just doing the normal baiting, and by the time the hunter is in the stand the guide walks away and drives off. They claim bears can’t count, so they don’t know a client has been left behind. Sounded like a great plan!

I’ve been fortunate to do a lot of bear hunting and I’ve seen a lot of baiting set ups, but never seen a better one that what Mike does. The stands are all large platforms built into several trees so they are solid and quiet. There is a safety railing around the platform, and attached to that is blind material. Essentially you are in an elevated ground blind which offers great concealment. I was impressed!

We dropped Ray off first and then Mike brought me to my stand. There was a slight mist in the air that felt more like a heavy fog than light rain. It was cold enough that there were no black flies and the mosquitos were manageable. I never turned on the Thermoscell, my head net was all I needed.

Other than a few squirrels, nothing moved until 6:40 when a black bear appeared as if from the mist at 20 yards. I figure he was about 175 pounds and I enjoyed watching him feed for twenty minutes before he’d had his fill and wondered off. I was sure a bigger one would show up before dark, but it just wasn’t to be.

Mike picked me up a little after 10:00PM. That is when I found out that Ray had a much more exciting set. He had three bears come in one by one. The first was small. The second was big enough to shoot, but he never gave Ray the chance. The third was bigger yet and Ray shot him just before dark.

Ray was “pumped”! Mike and I heard the story several times on the way back to camp! Shortly after arriving at camp the other guys pulled in and we found that everyone had some excitement.

Jaun saw three bears before shooting the biggest one. Richard had one come in early, which he shot, and then just before dark a much larger one came in. Joel saw five different bears including at least two very large ones, but decided not to shoot because he didn’t like the shot angle he was presented with on the largest one.

That meant that all five hunters had seen bears, and all but me had seen a large one. It was a heck of a first day in bear camp! We planned to get up early and go recover bears in the morning. I’m sure sleep will come hard for some of the guys tonight!

I’ll let you all know what we find in the morning. See you then.