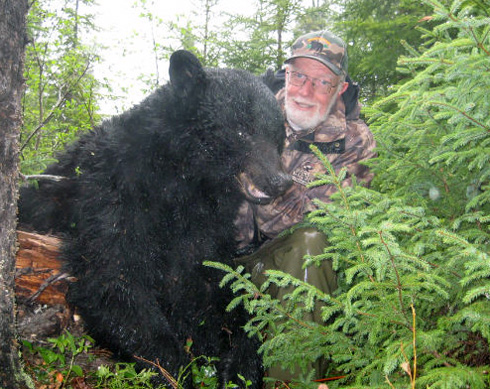 Seven AM came sooner than expected, or at least it felt that way! Some of the guys had a hard time sleeping and were in a hurry to get breakfast over with so we could go looking for their bears. It rained pretty good all night and the water running off the edge of the roof told us there would be no blood trails to follow. After another good breakfast (pancakes and sausage), we suited up and loaded into two trucks for the ride out to Richard’s stand.

Richard got up in his stand and told us about where he thought his bear had run after being hit. We spread out in line and started slowing walking through the thick woods. On the second pass we found it lying right where it had fallen mid stride on it’s last run to safety. Ground shrinkage had set in and Richard was surprised at how much smaller his bear looked this morning. It was still a good first bear, and will give Richard something to improve on next spring. Yes, he was happy, and “yes” he’ll be joining us again next season!

Jaun’s stand was next. After looking at the video footage of the hit none of us was optimistic about finding his bear, but we gave it the full “college try” for about an hour. Tired and wet, we had to finally give up knowing that Jaun’s bear would live to give another hunter a thrill. Perhaps next season.

By this time Mike decided we needed to get back to camp for dinner or it was going to be too late to get Joel and I out on stand for the evening hunt. Although neither of us was very excited about standing for hours in the rain, we were here to hunt and not play cards!

Dinner was moose steak tips and brown rice with mushrooms. Still no sign of weight loss in camp! More home made deserts (carrot cake!) topped off another fine meal, then barely time for a quick nap before suiting up for the evening set. Joel and I would be hunting after all and the rest of the crew was going to look for Ray’s bear after getting us out on stand.

When we got to my stand we saw that nothing else had come to feed since I left last evening. Mike added more bait while I climbed up in stand for the long wait until dark. By the time I was ready Mike was on the way back to the truck and my long vigil had begun. Nothing much happened until 4:45 PM when the bear I saw yesterday decided to pay me another visit. Today he was two hours earlier and seemed very nervous. I felt this was a good sign that other bears were around the area and stayed alert hoping to see one of the bigger bears Mike had on trail camera from just two days before I arrived. Alas, it wasn’t to be, BooBoo was the only bear I saw again.

When Mike picked me up I found out they had found Ray’s bear not 60 yards from where he’d been shot, and that it was a very large old boar. The woods were so thick that they skinned him out right there, but both Ray and Mike figured he would have weighed at least 300 pounds. Ray was very pleased with this bear, so I’m certain he was a big one.

Shortly after we got back to camp the rest of the crew showed up. All the guys had gone with Kenny (Mike’s assistant) to pick up Joel. They figured that with any luck Joel would drop a big one in his tracks with the smoke pole and they’d be able to help load him in the truck saving a trip back out in the morning. They were right! Joel was happy, and why wouldn’t he be…. He shot a MONSTER! Judging by what we could see in the dark by flashlight his bear was well over 350 pounds with a massive head.

After a late lunch of Shepard’s pie we were treated to a video of Joel’s bear at the bait complete with the kill shot. No question from the footage, that this is a huge bear! Tomorrow morning we’ll get a better look and some pictures we can share. See you then.