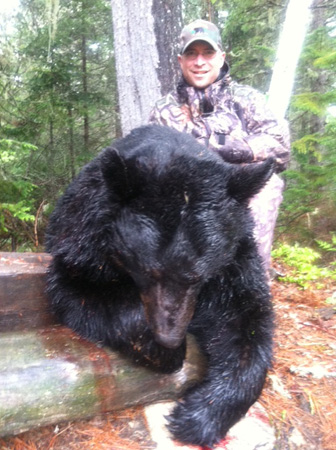 With no bears to recover everyone slept a little longer this morning, which was nice. We had breakfast at 8:00AM and then went outside to unload Joel’s bear for pictures. It is a great bear! The guys then skinned it out for a life mount and boned out the meat from the hind quarters to add to the back straps for the ride home.

Jaun spent some time practicing and found that his bow was shooting 9” to the right with broadheads. He re-sighted it for the broadheads at 20 yards and is now confident of doing a good job if the right bear comes in tonight.

It is still cold and misty, so I might decide to stay dry and warm today and just wait for the weather to clear tomorrow before going back to sit that stand. The big bears (at my stand anyway!) don’t seem to like to come to the bait in this lousy weather, so perhaps I should just wait for some sun shine….. I’ll decide later in the day.

Dinner today was something special. I have to say that in all my years of guided hunts I’ve never seen anything quite like it. They covered the dining room table with plastic and then several layers of newspapers. When everything was ready they started piling up the lobsters in the center of the table. Joel and Richard were steaming clams and Maureen had made a special macaroni salad. For appetizers we had a large platter of shrimp. It wasn’t dinner, it was a feast! That is the only way to describe it. I found out later that Wednesday is always “lobster day” at this camp. We all ate at least three lobsters (some managed to put away five) and yet when the dust settled there were still 23 lobsters left uneaten in the center of the table!

When time came to get ready to sit stands I decided I had a much better chance of getting my bear from stand in the rain than if I stayed back at the camp playing cards. I put on plenty of layers, finished it off with rain gear and headed out.

It was an interesting night on stand! BooBoo came in at 5:50PM and hung around eating for about twenty minutes. Shortly after he left I saw another bear coming in from my left. This one was bigger, but was it big enough? I watched him feed at the barrel for over a half hour trying to decide. Finally I decided he wasn’t quite big enough. I figured he’d weigh about 225 pounds, and even though he had a nice big head, I know there are bigger bears using this bait site.

Before this larger bear was done feeding another bear came to the site. The new one ran the other one off, and they both came crashing right under my stand. I swear the ground vibrated as they ran by adding to the excitement.

Seconds later one of them was back feeding at the barrel. For the next two hours they took turns feeding. While one fed the other would circle the area at about 40 yards standing guard and waiting his turn. It was fun to watch, and the night went by a lot faster than when there is nothing to watch but mosquitos. Alas, neither of these two bears was larger than the other, which meant that neither was the one I was looking for. It is encouraging that more bears were around, perhaps tomorrow I’ll get to see the big guy. Only time will tell.

When I got back to camp I found that Jaun had quit early because he got too cold to stay on stand. These cold, wet, rainy nights are not what he is used to being from Texas!

The weather forecast this afternoon said the sun will arrive tomorrow and the temperatures will be at least 20 degrees warmer. I’m sure that will cause the bugs to come out in full force, but it will be nice to be warm and dry for a change, and perhaps the big bear will show….. stay tuned, tomorrow could be the day!