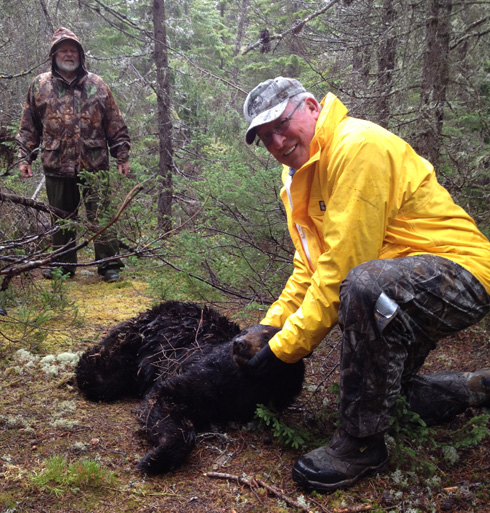 We woke this morning to another dry and warm day. After a great breakfast (still not loosing any weight here!) we went out to take pictures of Juan’s bear. It wasn’t the monster Mike hoped he’d shoot, but it made for a great first bear. Juan will be coming back for a bigger one next season, but this one is going to be made into a nice rug that will help him remember the excitement of this trip for many years to come.

Joel and Richard packed up and headed home today, a day early which will make their families happy. Before leaving they left deposits for next year and are excited about the return trip. I decided to maximize the potential of my last day by going to stand at 10:00AM. It was going to be a long twelve hours, but I figured the longer I sit there the better my chances. We know there are at least two very large bears hitting that bait, and they haven’t showed yet this week…they were over due!

To be honest, I had thoughts of switching stands. Mike showed me photos of a huge three legged bear at a stand about six miles from my site that no one has sat. It was very tempting to switch and give that big three legged one a run for his money! In the final analysis however I decided that I should continue to hold out for the dark faced bear I had waited all week for.

I went back to my original stand.

Thankfully the Thermcell functioned perfectly today, as the bugs were brutal. It was a long day, made longer by the fact that the bears didn’t co-operate! BooBoo finally showed at 4:50PM and broke the monotony. He stayed around for the better part of a half hour and I took a couple pictures. It was then a long wait until almost dark with nothing happening. At 9:10 I had pretty much decided that BooBoo was the only bear still hitting this bait, and I had just wasted twelve hours of my last day.

Then it happened, a bear appeared as if from thin air! He was big, but was it the big one? He was approaching the bait barrel at an extreme quartering forward angle that made it difficult to judge his size. It was light enough to see good, but not light enough to tell if he had the telltale groove in his forehead that only the very large old bears have. I kept watching and hoping he’d turn for a better look. The seconds passed like minutes, and the minutes like hours, as I waited and hoped this was the one I had been waiting for.

Just as he started to turn, another bear appeared from the brush about 15 yards to the left of the bait barrel. It was the huge three legged bear that was supposed to be six miles away! This bear was unmistakable due to the missing left front leg and 6” stump that protrudes from the shoulder. In a flash the first bear turned and ran the three legged one out of the area with brush crashing and sticks snapping as they went. That settled it, the first one was the big guy I had been waiting all week for…. But would he come back before I ran out of shooting light?

The seconds ticked by slowly as I watched every direction for some sign of the bear’s return. At that point I didn’t care which bear came back first, they were both tremendous trophies. Finally the bigger/first bear appeared and headed right for the barrel to secure some more chocolate covered cherries…. (my secrete bait for the trip!). When he did he approached at a perfect angle. He was broadside and slightly quartering away. I couldn’t ask for a better angle. I let him eat a few chocolates and get settled in, all the while listening to the big three legged bear circling the bait in the woods making a soft moaning sound like he was asking permission to come to the table.

I had spent almost 44 hours sitting on a plastic chair up on this platform just waiting for this moment. All the while I kept looking through a large opening in the blind made by a hunter last season for his video camera and thinking how perfect it would be to shoot through this hole and remain undetected. I came to full draw, twisted into position for the shot, and settled my pin in behind his shoulder. When the string slipped from my fingers there was a loud crack and the bear jumped clear over the 55 gallon drum landing at a full run six feet or more on the other side. There was a sharp pain in my left leg and I knew instantly what had happened!

After 44 hours on stand waiting for this chance I had shot from a weird position and my lower bow limb caught me in the leg! Looking down at the bait I could see my brightly fletched shaft sticking out of the root mass of the tree to the left of the bait barrel. I had missed the bear completely! This was further confirmed when I saw the bear slow to a walk and then turn to come back and investigate the strange noise. Would I get another chance? He was nervous, but he did like those chocolates! He started circling the bait site as the three legged one re-appeared and approached the bait barrel. This was going to be a good test of what was left of my nerves!

The three legged one started feeding, but wasn’t giving me a good shot angle. I didn’t want to screw up again, so I was standing with a second arrow knocked. If given the chance I would shoot over the railing this time… if there was to be a “this time” with the failing light that is. It was almost unreal standing there watching two absolute monster bears jockeying around the barrel wondering if either would give me a good shot. Just as the three legged one started to turn more broadside the bigger one made a charge and they both ran off again, the thick brush swallowing them up immediately. Was it over? Would I get another chance? How many more minutes of light did I have left? My mind was racing!

After another eternity (that lasted only seconds I’m sure) I saw the nose of a bear appear from the brush. It was a dark nose… the biggest bear had returned. Would he step out in the clear? No, he ducked back and disappeared again. I could hear the three legged bear talking from the deep brush to the left and then the big one appeared again. This time he came in from the right side with the bulk of his body protected by a large cedar tree. It’s as if he knew I couldn’t shoot him hiding behind that tree, but at the same time he wanted to get those chocolates before his three legged competition did.

I came to full draw and looked through my peep site. I could still see my pins, but I was almost out of time. Legal shooting hours lasts about fifteen minutes more than I have enough light to see my pins through the peep site, so every second now would count. I let down and waited to see if the big boy would give me that one more chance….. as the seconds continued to tick by.

Finally he made his move, the chocolates two feet away were more than he could resist! As he inched forward I came back to full draw. I anchored and mentally checked my back tension before settling the pin behind his shoulder. I could see the pin, but he was too black to pick a good spot without opening my left eye. I blinked back and forth between one and two open eyes to confirm the pin location as I let out half a breath. He was still creeping forward with his nose just approaching the pile of chocolates when I let the string slip off my fingers. Another loud crack followed by another broad jump over the barrel. This time however I saw the fletching from my arrow protruding from the bear as he leaped away through the woods.

Just as I started my release the bear started to pull back and my arrow struck too far forward. I could hope and pray that the 70 pound bow would force the Muzzy head deep enough to do its work, but it was going to be a long night before we’d return in the morning to see for sure. I knew I should have waited for him to settle down before shooting, but I also knew that I had only seconds of enough light to see my pins. It was a “now or never” situation and I chose “now”. In the morning we’ll know for sure, but my “gut” is telling me I blew my chance at the bear of a lifetime when I took the first shot through the hole in the blind ten minutes earlier.

Sleep is not going to come easy tonight. Stay tuned for the results tomorrow.