by Stephanie Mallory
in Bowhunting Posts
0 0
0 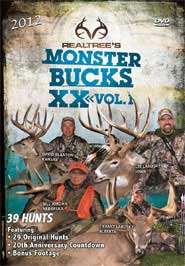 With three hours of remarkable big-buck footage, including 39 heart-stopping hunts, this Realtree hunting video reminds you why it’s a part of the most popular deer-hunting DVD series ever produced.

Follow Bill Jordan, David Blanton, Michael Waddell, Lee and Tiffany Lakosky and other big names in the hunting world on an epic journey through some of the best deer-hunting spots in North America. Watch as action-packed hunts with bows, rifles and muzzleloaders unfold on this remarkable hunting video.

As a bonus, the 3D archery challenge is back with some crazy shots. In addition, you can celebrate the 20th anniversary of “Monster Bucks” with a portion (hunts #20 – #11) of the 20 top hunts of all-time.

On “Monster Bucks XX, Volume 2,” you’ll watch 41 hunts featuring some of your most favorite professional hunters. Tag along as Vicki Cianciarulo, Kandi Kisky, Travis “T-Bone” Turner, and Michael Waddell take on giant bucks throughout the country.

In celebration of “Monster Bucks” 20 year anniversary, Volume 2 showcases the 10 most popular hunts ever captured by the Realtree cameras.

“Realtree Monster Bucks XX” is a must-have for your hunting video collection.

For more info, check out www.realtree.com.