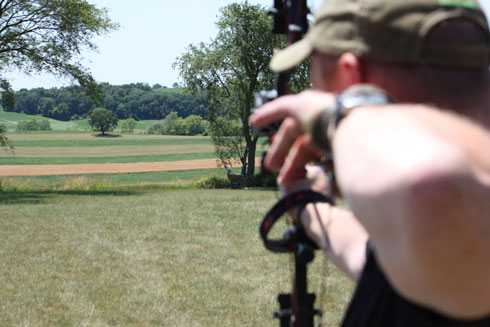 Author's Choice: Practice shooting longer distances so you will be comfortable shooting game at longer yardages.

I have a lot of people ask why I shoot four Blazer Vanes on my arrows…well the truth is this; I am superstitious. Blazers work so well I could get by with two of them, but I shoot four because for years I shot Traditional equipment and that is what I grew up shooting…four helical feathers.

I realize that Bohning has these new super fast shrink wrap systems and I would love to shoot these…but I can?t. You have to understand my mind set. I know with four Blazers, I can hit things I shoot at….at long distances. It’s called confidence. I can drill holes at close ranges with both, but when I practice at 70, 80, 90 plus yards it all boils down to what you have confidence in, and well, I love four Blazers. I learned a long time ago from my good friend Tim Wells of Relentless Pursuit that if I practice only at 20 or 30 yards I will choke if an animal steps out at 35 or 40.

His mentoring taught me to push my practicing to the farthest limits so that when a critter holds up at 40, I feel like it is a “chip shot”.  Picture this scenario; you practice all summer shooting out to 30 yards, and the more you shoot the better your confidence is at that yardage. Opening day comes and there you sit in your blind or stand and “HE” finally shows up. He is feeding broadside. You grab your range finder and click on him and he is at 34 yards…. 4 yards farther than you have shot all summer long.

Instantly your right lobe questions your left lobe. Your left hemisphere says you can make this shot, your right tells you there is no way. He continues feeding as you listen to this internal argument. You have two choices and both will leave you regretting your training. You can pass and hope for another shot later in the year…(which at any given time if you doubt yourself is the wise one) or you can “try” him.

Now as a man that has released many an arrow can tell you, if you doubt it…don’t “try” it. You owe it to the sport, you owe it to the animal. With that said, practice out as far as you can make your pins or instincts work for you.

There is nothing better than punching holes in your Glendel at 80 yards the day before the season, then if “HE” walks out at 34, you know you can make that shot over and over…heck you have been practicing at twice that
distance. It’s all about confidence. Now would I shoot “HIM” at 34 with three vanes…nope…I would everyday with four though.

The magic of an arrow is watching it fly. Today’s bows are so fast and furious there is no romance in a 20 yard shot. Step back to 100 and let the good times roll.

Beamer over and out.