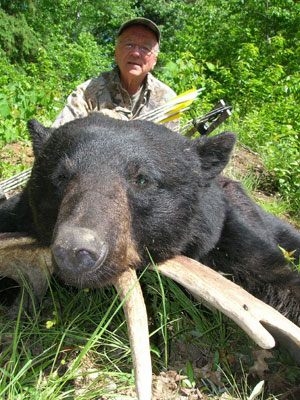 I rarely read when in a deer stand, but I’ve killed some really nice black bears with a book in my hand. Well, not literally, but you know what I mean. And so it was last month as I sat in a ladder stand in remote Quebec, bear hunting with Fred Law of Near North Outfitters. We were staying at Moose Territory Lodge, a long way from anywhere, having a great time hunting bears.

The first night I didn’t take a book, knowing I’d just be too wired to read. But no bears showed, so it was just me and the black flies and my Thermacell. The second evening I took a new book with me. The author of “The Mindful Carnivore; A Vegetarian’s Hunt for Sustenance” is Tovar Cerulli. The name of his book says it all and although that might sound a bit weird, a vegetarian going deer hunting for food, it really has become a rather common phenomenon, especially associated with urban deer hunts. In fact I’d just finished another very interesting book by Jackson Landers, “The Beginner’s Guide to Hunting Deer For Food,” where I got my first introduction to all this. I highly recommend both of these books for those wanting to have a better understanding about why non-hunting urbanites are starting to deer hunt. 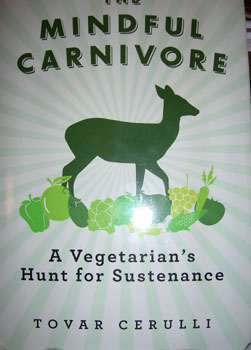 Sidebar: This book lists at $26.95 and can be found at various sites on the Internet as well as most of the large book stores. One such site is Pegasus Books, www.pegasusbooks.us.

Here is why every hunter should read this book. Ninety percent of the population does not hunt, and quite a few of those folks grew up in an environment where they were not exposed to hunting, to fathers who hunted, to the outdoors. Their mind set is not your mind set. Their background is not your background. However, they may well control the destiny of hunting, so understanding their position, understanding their background, understanding how they came to be a hunter, may be vital to the future of hunting. Now Cerulli wasn’t exposed to hunting, but he was exposed to the outdoors. But his mind set is not your mind set, and that isn’t necessarily a bad thing. It’s just different than what hunters expect. All the more reason to read and learn.

Tovar Cerulli spent some of his summers fishing for trout and chasing bullfrogs in New England, but he was always concerned about hurting, wounding, killing animals. By his late teens he’d moved through vegetarianism and became a vegan. That’s as far from being a hunter as one can imagine. However, Cerulli is a bright man who read key books on the meatless diet, and on ethics of hunting, animal rights, etc. My library is full of books on these topics and as I read The Mindful Carnivore I discovered that Cerulli had read and studied them all. Not your average vegan.

Ten years into his vegan diet, he started to question whether the lack of meat in his diet was healthy. Indeed, there is a lot of science that questions that too. The key here is that he questioned all the foods that he ate, and hunters would do well to do the same. Eating healthy is more important than most people realize and most doctors don’t even talk about it. As Cerulli and his wife began to garden, and Cerulli began to think hard about hunting his own food, he wrestled with the morality of killing animals. No question, all of us would be “better” hunters for doing the same.

At the same time, he realized that buying food at the grocery store takes us away from the real world of consumption. I am always struck by hearing high school kids talk about why they are vegetarians. They don’t want to hurt animals, they don’t want to hurt the environment, with almost no realization where their vegetables came from. No realization that they are indirectly responsible for taking the lives of animals and that farming all those vegetables we, and they, eat, affects the environment. Cerulli wrestled with all that as he came to the realization that we are alive on this planet because we sustain ourselves by death. You cannot avoid it. Death happens so that humans survive. Cerulli understood predation; that Thumper the rabbit, the cartoon caricature, was “entirely disconnected from reality.” He understood that often rabbits became “meals enjoyed by real owls.”

Most hunters with experience, while sitting in their tree stands, have witnessed hawks catching squirrels, foxes pouncing on mice, etc. As Cerulli evolved from an observer to a hunter, he began to realize that animals died in nature. Lots of them.

As Cerulli eased into the long bow and rifle hunting for deer, relying on friends to teach him, he was very cautious in the hunt and kill. In fact, in my view, he was overly cautious in the hunt, being so because he did not want to wound an animal. Would we be better hunters if we were a bit more cautious about the kill and wounding? I think so. But as hunters know, you just can’t always wait for that deer to stand broadside at ten yards before you shoot, because you may never get to shoot. Yes, as with all predation, wounding occurs, but there comes a point where you need to shoot to harvest meat.

Cerulli had trouble with what he judged as unethical hunters. Most hunters do as well. After taking a hunter education course, he writes about what an instructor supposedly said. I found it to be unbelievable, and in fact, I don’t believe the following was said. “ ‘I know some of these families,’ the instructor said. ‘As soon as some of these kids leave the classroom, I know they’re being told, Don’t listen to any of that stuff.’”…..”Their dads and uncles will tell them, ‘If you see a deer on posted property, just shoot it in the gut and it’ll run a long way to somewhere where you can get it.’ ”

I’ve taught over 100 hunter education courses. I’ve never heard an instructor say anything close to this. Maybe it was just an exaggeration of something said. Who knows? As an experienced hunter educator, one who served on the National Bowhunter Education Foundation Board for 20 years, I found that this exaggeration took away from Cerulli’s main point and misled readers who don’t hunt and may then think that such statements are the norm. They aren’t. However, I had to agree with Cerulli’s point that a one-two day education course would not always offset some of the poor ethics training some kids get in their families. But such is not at all common in my hunting world. Is New England that different in family hunting ethics? That different from my own West Virginia? I doubt it.

As Cerulli evolves into the mindful carnivore, he questions whether animals would survive without hunting. He reads and studies the economic benefits of hunting. Indeed, he worries that hunter numbers are on the decline and this could seriously impact the future for wildlife. I wish that all hunters would understand this. He discusses the classic book, ”Meditations on Hunting,” but misses some of it’s crucial points. Even so, he has studied that book, as all hunters should.

There is a discussion on bow wounding, with a couple of references, but ignoring the definitive Camp Ripley bow wounding study showing very low bow wounding losses.

Those points aside, I found this book to be an outstanding read, and one that all hunters could learn from. You may not understand the background and route Cerulli took as he evolved into the woods. No wonder. You came to hunting via your father, and started as a kid, with few qualms about morality, ethics of hunting, etc. It was part of your family history. You didn’t question things at all, you just went hunting and enjoyed it. Cerulli had to search his soul as he developed his hunting skills through a lot of trial and error. You didn’t have to do that. Read this book and get a clearer understanding of the fact that society has changed. Most kids no longer grow up as you did. Things are different today and they will be for you children and grand children. You already know that. Consider how few of your own kids hunt today.

And that is why reading this book is critical for hunters, if they are to understand the world in which we now hunt. The real value of this book to you, the hunter, and to your non hunting friends, is that it will make you think about our way of life and how we get our food.

Oh yes, on day three, just as I was getting into chapter 12, a dandy black bear stepped out, and I quickly put the book down and harvested a bear that punctuated a great experience in the North woods. Me, new friends, black flies, bears, and a great book.

SIDEBAR
This book lists at $26.95 and can be found at various sites on the Internet as well as most of the large book stores. One such site is Pegasus Books, www.pegasusbooks.us.