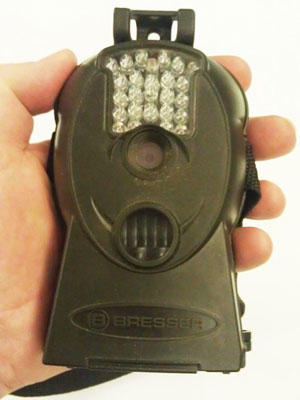 Some of the technological advances we have witnessed over the last 10-15 years have proven to be a huge help to us in our hunting endeavors. One such advancement is the use of digital trail cameras to help us scout our hunting areas. Nothing quite like being there, even when we can’t be there, to help us learn the animals in our favorite hunting spots, their patterns, their movements and even to learn where we can get away from other hunters on public land.

I have used a number of trail cameras over the past several years to help in my quest for filling those hard to acquire tags. As part of our 2011-2012 hunting season here in New Mexico, we decided to do a series of reviews on a number of cameras in search of the perfect camera for our extreme hunting conditions here in New Mexico. Which camera can go from timberline during elk season to the lowest desert for our sheep hunts and function everywhere in between for lions, bears and deer? One thing is for sure, we learned a lot about a number of different cameras.

All of the cameras we used had good points. Some had a few minor issues, but we can honestly say that each camera had a niche, that one place where it would be better suited than any other camera. Well, for those of you looking for a camera or two to throw in your pack for that back woods pack in hunt, the Bresser 5MP might just be what you are looking for.

The PIR sensor on this camera is listed as “Multi Zone”. We had photos where the subject triggered the camera at 50 feet at the high sensitivity setting (you can adjust the sensitivity high, normal or low). We also noted that the LED range (25 infrared LED’s) was extended slightly beyond the advertised 10-12 meters (32.8-39.37 feet). Overall, we would rate the sensor system in the Bresser 5MP as adequate per its advertised ability.

The trigger speed was listed at 1.2 seconds. We noted that some animals walking at slow to average speeds would not reach the full field of view prior to the picture being captured, while animals moving at a normal rate of speed appeared to be centered in the photos. We found the recovery time to be as fast as 6 seconds in the daytime in multi-shot mode, and around 15 seconds at night. Recovery time was slightly slower at night as would be expected.

The Bresser 5MP comes with a number of useful features. The camera can be used to record photos or videos. Videos are recorded as 640X480 or 320X240, whichever the user chooses. The 5MP can be set to allow for delays of 1 second to 60 minutes between triggers, and the multi-shot mode allows you to pick between 1 and 3 photos at each trigger. The camera requires a remote control for the user to interface with it and change settings. The remote is about the size of an MP3 player, so it does not take up much room, and it is fairly easy to use.

Overall, the picture quality was average. Photos taken of animals moving at night were blurry many times, and it was noted that at close distance where high quality photos should be achieved at night, the IR system on the camera caused a red glow in the photos many times. Each picture is date and time stamped.

The Bresser 5MP operates on 4 AA batteries. Battery life was good compared with the other cameras we reviewed. After 4 months and lots of pictures, the camera still had remaining battery life. All in all, I would say that the camera could easily operate for at least 6 months on one set of high quality batteries. Of course, this is very dependent on the number of pictures the camera takes, whether they are at day or at night, and operating temperatures.

The camera has two strap loops on the back of the housing and comes with a nylon strap for securing the camera to whatever you want to hang it from. We found no issue with the strap. The corner of the door offers a locking option as well.

The Bresser 5MP is fairly easy to set up. The camera remote is used set it up and operate it. The directions that come with the Bresser 5MP are easy to read and understand.

Overall, we would rate the Bresser 5MP as an average camera. At a retail price of $99.99, it probably has a place in the industry due to its compact size. There are lower priced cameras that provide better quality pictures. The selling point of this camera is its size. If it “fits” your needs, give it a try. I believe Bresser will end up with some very functional cameras. As newcomers to the trail camera game, it appears they are working on learning the ropes.

For more info please go to: Bresser Products or shop at Amazon below!

Taking Care of Your Venison!