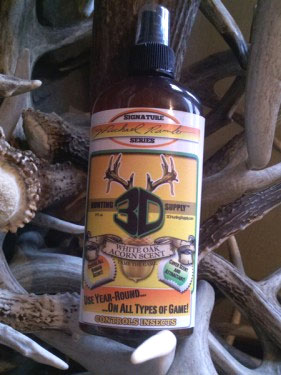 At age sixty-four you might find Doug Tyler laying bricks and cinderblock on a local construction site. Yep, he’s a full-time mason and has been at it for most of his adult life. He doesn’t wear a pocket protector or don a lab coat, but what he has done is spent the last 10 years developing a cover scent based on “White Oak Acorns”. He knew that this type of acorn is one of the greatest food sources for many game animals and that if he could perfect the scent they gave off naturally, hunters would benefit. Doug worked hard to refine the new cover scent over the next four years all the while holding down his full-time masonry job. While field-testing his product on a bow hunt, several does walked in from downwind and lifted their heads to face his position. Doug was nestled high in his tree stand and instead of running off, both does turned and walked directly towards him and eventually passed by without sounding the alarm. Right then he knew his cover scent was ready to go public. Tabbed “3D Hunting Supply” this new cover scent is a hot commodity you won’t want to leave home without.

L to R Darrell, Doug and Dale…Hence the name “3D”

Darrell, along with his brother Dale, have helped combine forces with their dad to market the 3D name to the masses. After five years of using the product something amazing happened, says Darrell Tyler . “My brother and I began to notice while spraying down with the all natural cover scent mosquitoes and other insects never bothered us. See if any other cover scent on the market does that!” Being curious about that myself I couldn’t resist as I had an up coming TV show to shoot in south Florida. Let me tell you there is nothing like a pesky mosquito bothering you while trying to pull focus.

I am currently producing a new series called Skull Bound TV on the Sportsman Channel and hoped to capture a two part series while on location gator hunting and bow fishing along the shores of Lake Okeechobee. The mosquitoes where thicker than gravy and I knew this would be a perfect “in the field test” for 3D’s new product! With one application of the 100% natural acorn scent those pesky critters faded away allowing us to bow fish gators, gar and mudfish. Both Jana and I were hooked! I knew if it worked in the mosquito-infested swamp it would be awesome on a midwest whitetail hunt. Jana Waller, Skull Bound TV’s host, would be hunting whitetails in the famed Brown, Pike and Schuler counties in Illinois!

This big mudfish met his fate during a daytime bow fishing trip on the waters of Lake Okeechobee.

Jana fought high temps in Illinois during the October doldrums and scored on this nice buck.

White Oak Acorn Scent has in intense smell that immediately brings to mind a fresh stack of pancakes at the local waffle house. You almost want to eat it while applying it to your clothes, shoes and hat! Truth is it’s one of the best cover scents on the market and an incredible insect deterrent. Jana was able to take a great buck down wind of her stand in Illinois during the 85 degree October doldrums and I harvested a great 11-point buck while hunting in Wisconsin last fall. Proof is in the pudding, they say, well in this case the proof stacked up some amazing trophies for both Jana and I while filming our new series this past fall.

3D is a family affair. Doug, Darrell and Dale are about to quit their day jobs and pursue the American dream of entrepreneurship. They say the mother of invention is necessity and thanks to Doug’s hard work and dedication, 3D Hunting Supply’s White Oak Acorn Scent is a necessity you’ll want the next time you head out to pursue that giant whitetail buck, hog or bear. The list is long and the possibilities endless when the game you’re hunting can’t smell you.

Back To The Real World