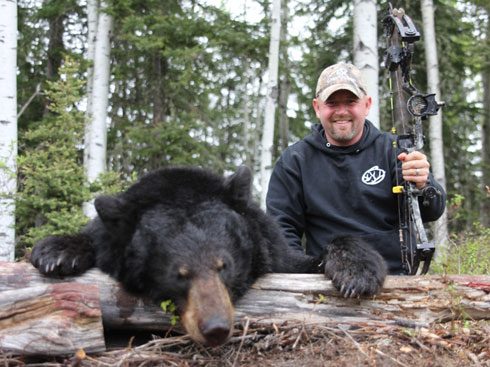 I was fortunate to go on my second bear hunt last week in Saskatchewan with Amyot Lake Outfitters LTD. and Chuck Paddock. Do to some unforeseen work restraints; I ended up in Canada a day ahead of Chuck. With the weather forecast looking pretty bad, I didn’t waste any time getting in the stand. They were calling for temperatures in the 40’s and rain. Right when I got to camp I jumped in my Rutwear and we were hunting.

Two small bear came to the stand while we were getting setup and a third bear snuck down to the boat and stole the extra bait we had. Needless to say, the hunt was off to a GREAT start. The night ended with one more bear sighting that was just a little too small to take. I went back to camp ate dinner and crashed.

The next morning I was chomping at the bit to get into the stand so we packed the truck and headed in that direction. Well, wouldn’t you know it, on the way to the stand I got a text from Chuck that he had finagled a flight to somewhere with a connection to someplace and was going to get into Saskatoon a day earlier than we expected. That was awesome, because the weather was not predicted to get any better. Twenty minutes later, I was in the stand and Chuck’s ride was on the way to get him at the airport.

Just like the day before, I had a bear at 20 yards within 15 minutes but again, it was just a little too small. Shortly after the bear left the bait the wind picked up and it got cold hanging out in the tree stand. I had started the day in just a Rutwear shirt but two hours into the hunt I went to the mid-season gear and by four hours into the hunt I was in my late season gear. That final change to late season gear was perfect.

Right after I had put the coat on Cody said he saw a bear coming and it looked good. It was but it did a quick walk by the bait and left. I was crushed, I just knew it must have seen us move, winded us or something. Two or three minutes later though he came back and I was pumped up. Great bear 20 yards away!

He stood there quartering toward me for almost 15 minutes before he finally turned and gave me a perfect quartering away shot. I picked a spot, settled the top pin of my Spot-Hogg on him and watched the Lumenok nocked arrow blow straight through. What an awesome feeling.

He ran about 70 yards before he dropped. I had my first bear ever and was pumped that I got to do it with my bow. If you never hunted bear, you have to go try it.

But there is more.

Now where do I start? I was supposed to be flying with Tom on Sat but instead I had a Vessel coming in to New Orleans loaded with Transformers that were being loaded on our barge for a Nuclear power plant so I couldn’t get out of it. Stuck at work!

Well, as luck would have it we finished early and I was lucky enough to fly standby from New Orleans to Charlotte then Charlotte to Toronto and on to Saskatoon on Monday and was standing in Saskatoon at 2:30pm with all my Badlands Bags in tow.

Brad picked me up at the airport and we started to head out of town when Tom texted me ‘Big Bear Down’ and man was he right. It was a heck of bear so I was amped up and ready to get to camp which was 4 hours away.

We made it to camp I unpacked we did several congratulations took pictures and we got ready for the mornings hunt. We didn’t get out of camp till about 10:30am with about a 30 min drive so when we got back off the road about 14 miles it was like 11:30am. We baited the bait and I got the Strother Wrath put in the corner of the blind with my Tru-Fire release attached. Tom put the camera equipment together while Brad baited the site. I clicked the nock to the string & was ready to rock.

We were doing an interview when I looked out the window and saw a spot turn black and I thought ‘No way, I have only been here like 10 min that can’t be a bear’. Sure enough it was a heck of a bear and it was headed our way. I grabbed the Wrath and remember telling Tom not to worry as I was shooting this one. I drew my bow, brought my arrow into position but the bear didn’t give me a good shot. He laid down at 10 yds so I let down to wait him out.

It was a tense few minutes having a big bear that close to you. Every little sound or movement could trigger him to leave. When he finally stood up I drew and settled the Hogg It pin right behind his shoulder and touched off the trigger. The Lumenok lit the way to show the arrow hit it’s mark. The Tru-Fire T-1 did its job and the Bear only went 30 yds before falling over.

I was in disbelief. I had come all this way to hunt 15 min for my second bear. One thing is for sure, I will be back at Amyot Lake Outfitters in Saskatchewan next year looking for an even bigger bear.

Close Ups Of A Big 8