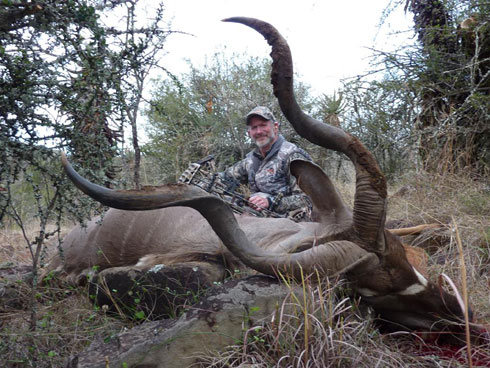 We tried to “walk & stalk” Kudu for five days with no success, and then turned to a blind where I took this nice bull at 20 yards.

Let’s face it. The economy still pretty much sucks and all us of are watching our nickels and dimes like hawks. Yet we still have the passion for bowhunting and want to try some new things, some day. But with money tight, the fear is that you’ll scrimp and save and then, once you arrive on that Dream Hunt, in ends up being your Worst Nightmare.

Let me welcome you to South Africa.

I just returned from a 10-day bow hunt in South Africa’s East Cape that exceeded all my expectations. It is the second time in the past 6 years I have hunted with my friends, owner/PH Andrew Renton and his wife, Sharyn and PH Marius Potgieter of Kei River Safaris ; U.S. booking agent Wade Derby of Crosshair Consulting. Last time it was a plains game hunt extraordinaire. This time it would be the same but with a bit more excitement. This time, we’d target Cape Buffalo with the bow. More on that in a second but first, here’s why you should consider bowhunting South Africa.

First off, Africa is everything you have heard and more. South Africa is modern and safe and by far the most inexpensive of all the sub-Saharan African countries to hunt.

“Africa is more affordable than most North American single species hunts,” Wade Derby told me before I left. “Some say this is a bold statement but let me provide some real examples. The most inexpensive traditional Western 1×1 elk hunt I offer is $4500, and the elk tag and licenses for this venue are over $1000. While a solid hunt in its own right, it is a no-frills backcountry hunt without creature comforts and truthfully, about a 50% chance at getting a bow shot at any legal bull. On the other hand, a plains game hunt with Kei River Safaris is 7 days 1×1 all inclusive — meals, all beverages, trophy preparation, private rooms with power and bathrooms, daily laundry/maid service, taxes included, plus 5 animals for under $4000. A package such as this one offers the following species: Gemsbok, Blesbok or Mountain Reedbok, Impala, Wildebeest, and Springbok — and you are going to get shots at all of them, or comparable animals. Even dangerous game packages in South Africa are competitively priced compared to other African nations. Cape buffalo packages vary in price from $11,500 to $15,000 depending upon the venue chosen. By no means a cheap hunt, this is still less money than most Dall sheep or Alaska/Yukon moose hunts here in North America. You can also customize your package based on trophy fees for additional animals.”

Kei River Safaris is a small, family-run operation that thrives on personal service. Andrew and Marius have hunted their area all their lives and both are extremely accomplished both as hunters themselves and as PH’s. The lodge, food and equipment are all 5-star and best of all, you get all this at a reasonable price. Andrew specializes in offering mixed-bag hunts catering to the hard-working American hunter. Another bonus is that there are no limitations on horn length or record book score, which in many other instances would mean paying additional trophy fees. The other thing I really like is that they prefer to hunt in the “walk & stalk” style, which suits me perfectly, though you can hunt from blinds as well if you choose. Andrew also has incredible connections with local landowners and game ranchers so locating top-end animals for clients is not a dream but a reality. Marius’ hunting philosophy sums it up best: “Good is not good enough.” They want the very best for their clients, and it shows.

Enough about that. How did my hunt go? I wanted a buffalo and chose South Africa for several reasons but two stand out — cost and hassle. Here I would not have to fly to another country after landing in Johannesburg (saving both time and a lot of dough), would not need malaria and yellow fever vaccinations and the cost would be much less than had I chosen to hunt in, say Zimbabwe which offers the next-lowest-priced buffalo in southern Africa. And it proved to be a wise choice.

We located the herd and found an old bull that was not interested in being around other buffalo at all. When we made the stalk he was alone and in semi-open brush country, making it easier to maneuver and safer than had he been in a thicket. With the wind right we got above the bull and let him feed slowly past us. At 18 yards I took the shot with my 80 lb. Hoyt RKT, which sent the 816-grain Easton Dangerous Game shaft and 200-grain Muzzy Phantom SS two-blade broadhead through his ribcage. The tension was high, but the bull took just a few steps, looked at us briefly, then toppled over dead. Holy buckets!

Unbelievably, it got better. We tried spot & stalk hunting for Kudu for four days but the terrain was so thick that despite getting within 20-50 yards of a big bull every day we could not get a bow shot. So on day 5 we did the old blind thing and I shot a nice bull.

Then the torrential rains came, reminding me more of Alaska than Africa. But despite that, Andrew knew of a place where there were some exceedingly large Blesbok, so off we went. Blesbok are much like our own pronghorn in that they like wide-open spaces and live in herds, so after Marius and I took a hide in a stand of Black Wattle trees Andrew and his tracker, Eric, slowly pushed them. Eventually the herd came past with the big boy walking at the back and I pasted him at 50 yards. He ties the current Safari Club International world record buck, if you can imagine!

To top it off, the next day Andrew took us to a spot where he knew there was a preponderance of Cape Bushbuck. After lots of glassing and a long and tense stalk, Marius — who holds both the current SCI bowhunting record book No. 1 and No. 6 Cape Bushbuck, slid me within 30 yards of a Bushbuck ram that will go in the top 5 in the book. Wow!

Next year’s hunt has already been planned. I want one of those big Kudu bulls, and another shot at Bushbuck. They may not be big in size, but they are as challenging as any Coues deer I have ever tried to arrow, and that’s good enough for me.