My friend, Jason Nordberg, is the founder and inventor of the Dead-On Rangefinder. His favorite bowhunting partner is his wife, Jen. As a proficient archer who practices her shooting diligently, she can match his ability with an elk call, and has his enthusiasm for the hunt. “Way back in 1999, I asked Jen if she wanted to go bowhunting”… “She said, I’ll go, but I’m not going to take my bow.”

Being very ethical, she was confident in her ability to shoot her bow accurately, but not confident in judging the distance to an animal – a crucial element in bowhunting. The possibility of wounding an animal was not worth the risk to her. In an effort to secure a life-long hunting partner, Jason began dreaming up a simple way she could range the target and have the confidence to shoot. This was the beginning of the Dead-On Rangefinder.

Usually, a bow has pin sights, with pins for 10, 20, 30 and 40 yards. The only problem is if you “guess” what pin to use, you can easily miss… It happens a LOT! At short range, a lot of guys can hit an arrow with an arrow, if they know the exact distance, but put ’em in the field, and they don’t know how far the target is, and they can easily blow the shot. Things look different in the field and yardages are difficult to range accurately for most people. Part of Jen’s problem (along with the rest of us) was trying to control her excitement enough to judge the range accurately when a shot at a big-game animal presented itself. “What if I misjudge and hit high or low, and miss the vitals?” she says. “I was really afraid of wounding one of these magnificent animals, so I said I’d just take the video camera.” The fact is that it’s just hard to judge distance for a majority of people in the world, because it’s not an everyday situation.

His hunting partner’s dilemma inspired Jason to search for a solution. After he came up with the concept for his range finder, Nordberg, who studied math and physics at the University of Montana, suspected there was a mathematical formula to make it work, but he couldn’t dredge it up from his memory. Luckily, his former UM physics professor, Mark Jakobson, came to his rescue. Jakobson, who’s now retired, happened to drop in at Karl Tyler Chevrolet (where Jason is the General Manager), and Nordberg explained his idea for a range finder. “It’s really a simple math formula which he taught in college, but I just couldn’t remember it. Since you can’t patent the math part of it, we applied for a patent on the application to bow sights and using it for archery.” Jason’s quest led to the invention of a device that would prove to be a boon to bowhunters across the country. The Dead-On Range Finder allows the archer to quickly and accurately judge the distance of game in the field, and make it easier to shoot more accurately for a clean kill. 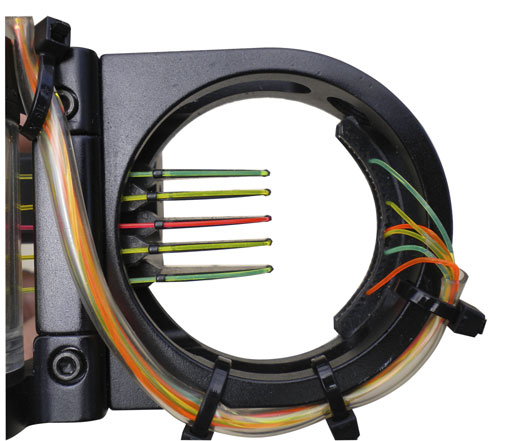 The original range finder Nordberg came up with was remarkably simple to use. It consisted of a tough nylon decal, about a quarter of an inch wide and an inch and a half long that attached to the sight window bracket that surrounds the pins on most compound bow sights. It works on the geometric principle of triangulation and a process called bracketing. Today’s Dead-On is a more high-tech, but is still very simple to use.

The latest design consists of a rubber housing that holds fiber optic pins. Each pin is adjustable for any animal and any draw length. 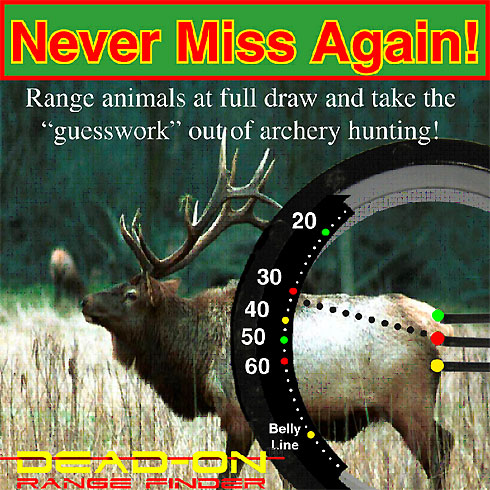 The game animal is bracketed between two parallel lines on the range finder. When the animal’s body (from belly to back) fills the space between the dots, the animal is at an exact distance from the hunter. The distance is determined by a mathematical formula based on three known measurements — the archer’s draw length, the width of the space between the lines of the range finder and the average depth of the game animal from belly to back. It’s the same bracketing principle some rifle scope manufacturers have used in their reticule design for determining range to the target.

The huge advantage of the Dead-On Rangefinder in bowhunting is you can find the range of an animal when you’re at full draw. There are other types of range finders on the market, but none allow the archer to range while at full draw. Another problem with other Range Finders is they require the use of one or both hands to operate. “I bought Jen a laser range finder,” says Nordberg.” But the problem is it’s big and bulky. If an animal steps out, you don’t always have a chance to use it without the animal catching your movement.” Jen discovered another drawback to the laser range finder. “I’d sit and range every tree and stump around me in a circle,” she says.” Then after I’d been sitting there for an hour, I’d forget the ranges. Now all I have to do is lift my bow and I can see right away what the range is. You’ve got to use your sight anyway.”

As for me, I’ve been involved in the product development with Jason since he came up with the concept and I’ve harvested many animals with it. When Jason started to get more involved with the dealership and had less and less time to devote to Dead-On, I offered to buy the company from him.

Shawn and I took over in March of 2009. My motivation was really similar to Jason’s – my hunting partner, my daughter Ryann, had the same challenge as Jen…. judging distance in the field. She loved going with me but never wanted to take her bow. Now, I’m glad to say because of the Dead-On Rangefinder, she does.

The Patented Dead-On Range Finder mounts on any bow sight and is being marketed by Nordco, LLC, in Missoula, MT which is currently owned by me, Rob Efinger and Shawn Hoagland. For more go to: www.deadonrangefinder.com.

Close Ups Of A Big 8