by Marc Anthony
in Bowhunting Gear
0 0
A A
1

State by state, the legalization of crossbows for hunting is closing in fast. It appears Illinois will be on that list with a modified version for the inclusion of a crossbow during the later part of the archery season. Currently, a person can hunt with a crossbow here in Illinois with a doctor’s excuse that demonstrates either a permanent or temporary disability but it appears that they may not need a doctor’s blessings before too long!

With the ever changing laws comes equipment that evolves along side with it. This year the addition of a crossbow will no doubt be sending hundreds of hunters to the archery shops for a new crossbow. With that choice of weapon relatively new; how does one perform proper due diligence in such a short amount of time? In the states that have allowed the use of a crossbow for years, is it possible they have more choices than they can handle? Regardless what state you live in, you may want to save time and energy by reading what others are saying about their equipment!

I was fortunate enough to review the  Ghost 350 crossbow from Barnett Crossbows in addition to surveying the experiences/opinions that the dealers and end-users have been able to give me. Part of reviewing a product is gathering data from people who have used similar equipment and compiling it with my findings. Cumulatively, a complete review is satisfied! 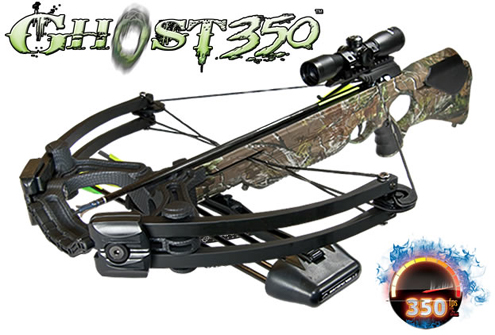 Barnett sent me a new Ghost 350 to review, so off to work I went. Out of the box was one crossbow, a scope and three bolts (arrows). Assembly wasn’t bad but I was temporarily stumped by the installation of the cable slide, but eventually figured it out. I think one extra picture showing the placement of the slide would have helped me there. Just one threaded bolt was needed to attach the bow assembly to the stock. The scope went on effortlessly and I didn’t even need to adjust it after I shot it! It was dead-on at 30 yard and under, out of the box. After I confirmed all hardware was installed correctly and there were no defects in the string, bolts (arrows) or safety mechanisms, I proceeded to the archery range.

The Ghost 350 carries 175 pounds of draw force, so needless to say, that can be a bit to pull with your bare fingers! Luckily this kit came with an RCD, which stands for ‘Rope Cocking Device’ to aid in cocking the crossbow. By using the RCD, the leveraged poundage is reduced to 50%, or 87.5 pounds in this case. That is still a firm pull but a lot better than the 175 pounds without it. Bottom line; you have to have a lot of poundage if you want it to perform, so get used to it!

After cocking the crossbow, I slid a bolt into the flight rail placing the cock fletch down into the groove and sliding the bolt all of the way to the string and trigger mechanism. One nice thing Barnett designed into the system is the safety feature that automatically engages the safety to the ‘ON’ position when the bow is cocked and loaded! That helps prevent an accidental firing. After I loaded the bolt, I was ready to turn the safety off and shoot my target.

After aiming, I turned the safety off and fired into my foam layered target. The shot was incredibly fast and the sight was dead-on. The trigger feel was perfect, in my opinion. No drift and just the right amount pressure needed to squeeze a shot off. Vibration was kept to a minimum and the entire unit felt sturdy and solid. One nice attribute regarding the carbon riser is that it reduces weight on the front of the unit thus transferring the center of gravity toward the rear (stock) for a better balance and feel. After shooting the Ghost several times, it became quite familiar and comfortable for me. I really enjoyed shooting it!

The Ghost weighs in a bit over 7.5 pounds due to its composite and carbon construction. All of the tolerances were tight and the fits were equally close. It’s a well thought out, well designed piece of equipment for both hunting and target practice. 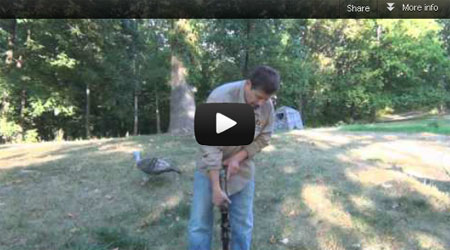 Barnett has been in business for over 50 years and has a solid footprint on the crossbow industry. Even though crossbows have been used since the medieval times, their popularity continues to grow and Barnett has continued to improve as well with innovative designs and safety features. I think it’s also fair to say that the dealers I spoke with all had good things to say about Barnett’s service and equipment! I give the Ghost 350 a “Thumbs Up”! 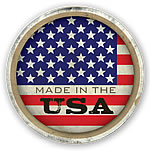 Barnett crossbows are Made in the USA and warranties the stock, trigger mechanism, and limbs for 5 years! You just have to fill out the Warranty Card and send in to the dealer upon purchase of the bow. You can visit their website for more information on their crossbows at:  Barnett Crossbows