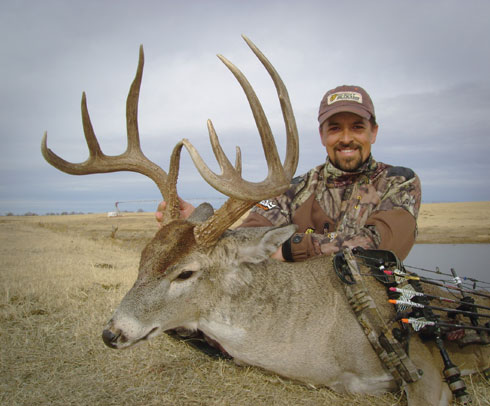 Doing things correctly in the early season can offer up some great rewards.

IT WAS EARLY bow-season in Texas, which means one thing: It was warm!

The temperature was in the 80s. It would have been a good day to be at the beach, but hunting season was open, and all I could think about was shooting a buck.

After a painstakingly slow walk to my stand, I relaxed and cooled down. An hour or so later, I watched as several deer approached. They were very cautious, but they eventually settled down and started to feed. About an hour later, I noticed they stopped feeding and diverted their attention in another direction. I followed their gazes and spotted a 9-point buck.

The tall-tined buck was heading my way, intent on joining the other deer. It was not downwind of me, but if it kept walking on the same path, it soon would be.

My heart hammered as the buck moved closer. I was worried it was going to catch a whiff of my scent and bust out of there. I held my breath and closed my eyes as the buck picked its way closer. There was nothing I could do but hope it didn’t scent me. I had followed my usual scent-control regimen. Now, all I could do was hope it worked.

The 9-pointer continued, and soon it was standing downwind. It paused as it stepped into the open — a fatal mistake. I zipped an arrow through the buck’s vitals and watched as it bounded off through the Texas brush. Minutes later, I took up the blood trail and tracked down the dandy buck.

Stay Cool
I have killed bigger bucks, but that high-racked 9-pointer was the first deer that really showed me how critical scent control is. Without proper precautions, I’d have never killed that deer.

It’s important to practice scent control all the time, but it’s vital on warm days early in the season. In my home state of Texas, temperatures can be in the 80s or 90s in October when bow-season opens, so you really need a scent-control game plan to fool wary whitetails.

I begin every hunt with a shower using Scent Shield soap and shampoo. From there, how I prepare for the hunt depends on the time of day.

In the mornings, even in Texas during the early season, it’s relatively cool. After driving to my hunting area, I remove my clothing from my Scent Blocker bag and suit up in all my layers. I like to spray my clothing with Ti4 before I put it on. It’s easier to spray down every inch of fabric when you’re holding it, rather than wearing it. Then, and this is critical, I walk very slowly to my stand. The last thing I want to do is start sweating and get overheated on the way to the stand.

I prepare for warm-weather afternoon hunts a bit differently. By afternoon, it’s generally pretty hot. I make a point of arriving at my hunting area extra early. You need to allow yourself extra time to walk to your stand so you don’t sweat. When I leave the truck, I’m generally wearing just my base layers; sometimes just shorts and a T-shirt. I carry my exterior layers to the stand in my fanny pack. I climb into my stand and then give myself time to cool off. This is really important. I’ll usually sit for 20 minutes or until I feel my body starting to cool. This is also why arriving early is so essential. You want to have time to cool and move around in your stand before deer start showing up.

After I cool down, I wipe down with Scent Shield Field Wipes before donning my exterior layers. The Scent Shield Body Bath Towels are nice too. They are pre-moistened. You can imagine how it feels to apply a cool towel to your skin on a hot day. Not only are they effective at controlling your scent, but they are downright refreshing.

Key Areas of Concern
One thing hunters really need to be aware of is how much heat and scent you lose through your head. The highest amount of scent on a human is on the head and hair. I don’t care what your wife or girlfriend says, to a deer, your hair stinks. Controlling scent in your hair is really key to your scent-control regimen. I love S3 Hair and Body Deodorizing Lotion. I use it by the gallon. It’s particularly important during the early season because I don’t wear any type of headnet in warm weather. Headnets are just too warm and they tend to suffocate you in hot weather. Breath Shield Gum is also a good idea for controlling scent from your breath.

In addition to your head, the other key scent-producing areas to worry about are your armpits and feet. Scent Shield deodorant will take care of your armpits. ScentBlocker boots have really changed how effectively we can combat foot odor. Anybody who has ever had athlete’s foot knows how hot, moist and sweaty your feet can get. This generates tons of scent. The activated carbon in ScentBlocker boots really serves to help suck up that odor. They really are amazing. When it comes to my boots, I’m very conscious about cinching down the upper carbon layer at the top of the boot. This ensures no odor can escape and helps the activated carbon do its job. Then I douse my boots with Ti4 spray.

Speaking of Ti4, remember, it’s not just for clothing. I spray it on my bow and all my hunting accessories to keep them scent-free as well.

Getting In and Out
How you enter and exit your stand is a prime consideration for hunting success. You really have to take a lot of precautions to prevent deer from seeing, smelling and hearing you.

Spray down everything with Ti4 before you start walking, especially on your lower body where you might come into contact with the ground, brush or grass. You can’t overdo it. Make sure you spray all your clothing and equipment. Wear gloves, even when it’s warm out, to keep from leaving scent on twigs or other objects you might have to push aside.

Then pick a route that will help you get to your stand undetected. Steer well clear of bedding areas or other places deer are likely to be. Try to stay hidden, whether you’re walking in the woods, in a ravine, behind a rise or some other cover.

If I’m hunting the same stand frequently, I’ll rake away leaves on the ground to keep deer from hearing me approach my stand. If I really take all the necessary precautions and am meticulous about scent control, I have no problem hunting the same hot stand site over and over, sometimes for a week straight. It just comes down to how well you control your scent and conceal your approach.

Pre-Season Preparation
Hunting Texas deer early in the season can be tough, so I try to make preparations for my hunt before the season.

I place several scouting cameras around the property a month or more before bow-season begins. My goal is to capture images of as many deer as possible on my hunting property.

This helps me do a couple things. First, I can analyze the body size and antler quality of the bucks. Sometimes bucks can grow impressive racks before they are fully mature. Using scouting cameras, I can study their body features to determine whether the buck is a mature animal. This prevents me from shooting impressive young bucks that could be real giants in a year or two. When a buck shows up during hunting season, I can usually recognize it and I know whether or not it is on my “hit list.”

The other advantage of placing scouting cameras is finding out the areas bucks frequent. When opening day arrives, I have a good idea where bucks are, and equally importantly where they are not.

This scouting is critical to early season success. Mature bucks move very little in warm weather. They usually travel and feed after dark, with small windows of movement early in the morning and just before dark. I want to make sure I am in the right areas so I can take advantage of these narrow windows of buck activity.

Even though bucks might move right before dark, it is important to arrive at a stand hours earlier. Does, fawns and young bucks might show up each evening well before nightfall. When you’re hunting a food source, as I often do early in the season, you’ve got to be set up before these deer show up. The presence of these deer can be a good thing. Mature bucks might be bedded nearby, observing does, fawns and young bucks as they feed. These deer, in essence, serve as confidence decoys, so it’s critical that you don’t bust them off the food source.

That’s where scent control becomes critical. Mature bucks will observe the body language of feeding deer before they enter the food source. If these deer don’t seem relaxed, mature deer might wait until the cover of darkness before approaching. Therefore, your scent-control program must be nearly flawless to fool the nose of does and fawns for what can be hours at a time as you wait for a mature buck.

Precautions for Success
Controlling your human odor isn’t hard; you just have to get into a routine and dedicate yourself to following it. Bust a buck one time because you were lazy and you might not get another chance at it.

Warm weather in the early season presents some new challenges to your scent-control program, but they are nothing you can’t handle.

Take these precautions and you’re well on your way to success. If you can control your scent, even if it only buys you another second or two, it’s worked.

What It Takes To Do It

More Of What It Takes...