How a Scouting Camera can Make you a Better Hunter 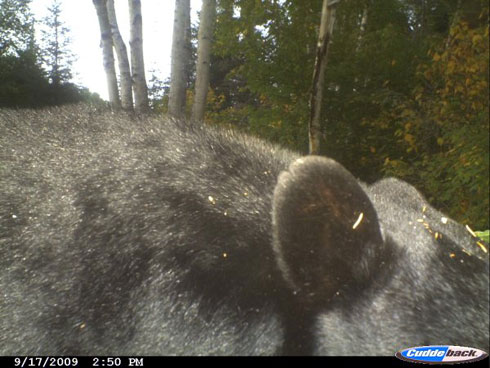 Author's camera got a close up view of this nice black bear.

The use of a scouting camera has grown exponentially as an aid to the deer hunter in the last decade, which is a testament to two things: it’s fun and it gives the hunter an edge. First of all, using a scouting camera is a blast, it is fun to see what the camera’s eye has captured while you are not there…everyone loves a surprise. Many deer hunters have discovered that scouting cameras give them yet another new and innovative method of hunting the elusive whitetail deer. Second, scouting cameras enhance the whole hunting experience. Remote photos provide a series of clues as to the habits and whereabouts of various deer in their hunting area. The hunter employs these actual photos of actual sightings, a lot of guess work is eliminated in an effort to successfully harvest a deer, perhaps even a trophy buck of the dreams.

Back in the mid-nineties a friend of mine who was the president of a large private hunting club in the Berkshire Mountains of Massachusetts came to me for some advice. He knew I had been using scouting cameras for a few years as an aid to my scouting program and had been having success on quality animals during the bowhunting season. It seemed that several members, including my buddy, needed help to reveal the movement patterns of the mysterious monster bucks they thought were operating in a totally nocturnal mode. They thought these big bucks seemed to be roaming the property under the cover of darkness because they had not been sighted during daylight hours.

I devised a program to evaluate the property by strategically locating several scouting cameras in places where the terrain would force the deer through a certain area or on trails outside of a thick swamp. Others were posted to photograph action in bedding areas. The camera scouting program lasted just over an entire year. This way all seasons were captured and the cameras were moved to different locations throughout the entire property. The results? I never got pictures of these monster bucks they believed were roaming their hunting club in the darkness of the night. I did however get many pictures of the same does, spike, and small basket bucks on the property. After retrieving many rolls of film from my cameras and having the film developed over that year’s time I came to realize that there simply were not all the mystical nocturnal monster bucks they thought were wandering the property of their hunting club.

A meeting with the members was set up to give a slide presentation of the findings and several members commented that something must have been wrong. They felt sure there had to be some monster bucks roaming their property in the darkness of the night. After all many of the members had seen the sign: big tracks in the snow, scrapes, and rubs. They felt there just had to be some big bucks in there somewhere on the property.

Pictures do not lie and the photos were all the proof I needed to convince the membership that the problem was not monster nocturnal bucks on the property. What they needed was a good deer management program. If there were any big bucks on the property we would have captured them on film especially after such a comprehensive and lengthy use of the scouting cameras.

The scouting cameras were located in many different areas and they were on duty 24/7. They were not seeing those monster bucks on the club’s property because quite simply they were not there. This data was based on deer scouting camera photographs over a variety of natural terrain on the club’s property over a long period of time. If you want to kill big bucks you must hunt where big bucks exist and the higher the numbers a certain property contains the better your chances will be of getting an opportunity to harvest a big buck.

The club immediately implemented a quality deer management program on the property to correct their problem. After several years of extensive deer management on the property they started to consistently harvest several quality trophy class animals every season. We all learned valuable lessons from using scouting cameras on the property. A scouting camera just can’t find a big buck that is just not on the property. But they did a great job of letting us know what was actually wandering the woodlands within the boundaries of the club’s property. And this information brought about a new program designed to make better use of the land and to cultivate a netter deer population. Instead of operating with a fantasy set of beliefs based on non-existent bucks, the factual information led the group to re-think their options and create opportunities in a proactive way, instead of just attributing lack of sightings to the nocturnal proclivities of monster bucks.

The deer hunter has a defendant advantage with the digital scouting camera technology that is available today. This technology has made it increasingly easier to snap a picture of the deer that are roaming around any property. Back when I started using those first generation 35mm film scouting cameras they were an excellent aid in my remote scouting plan for the season. They really served me well, but the capabilities of these new digital camera models have jumped them millenniums ahead of the 35mm film models.

The key ingredient to switch over was how nice it was to experiment with the digital scouting camera unit. I could take all kinds of test pictures to insure my set up was perfect and simply delete them right there on the spot. With my old 35 mm film scouting cameras I was continually wasting expensive film and running back and forth getting film developed at an additional cost. The cost saving on film and developing alone was well into the hundreds of dollars not counting the fuel and time running to the local store to purchase and get the film developed.

Let’s take a look at what you can do with scouting cameras and how they can make you a better deer hunter or manager on a certain parcel of property.

• Pattern the overall deer movement on any parcel of property. This will allow the deer hunter to study how the deer are using the property. This information will pin-point where and when deer are sighted at particular areas within the property boundaries. Deer don’t always behave the way one thinks. A scouting camera will quickly show the “wheres” and “whens” of the deer movement.

• The hunter will be able to pattern an individual buck. A hunter could be fortunate to learn that a trophy buck is within the boundaries of the property he is hunting, and the scouting camera will help him locate the best location to set up an ambush site. Scouting cameras can act as a great motivational tool when the hours on stand can start to wear on the hunter. Once the hunter captures a trophy class buck on film it’s almost as good as actually shooting one with a bow or gun. An actual documented sighting will be a great inspirational tool for any deer hunter to stick it out, even under the worst of conditions. When the hunter knows for certain that the area has a great buck he will have a better attitude and a lot more perseverance to wait it out for that trophy animal.

• A scouting camera can take the guess work out of the equation stating what is actually out there on the property. The scouting camera will tell the hunter about the quantity and quality of the deer on the property- good or bad. The hunter will learn if he should wait it out for the big bruiser. On the other hand may learn that his area does not support the quality bucks he expected. In that case, the deer hunter can decide to hunt elsewhere, or elect to lower his expectations as a quick fix for the current season. Optionally he may decide to implement a deer management program that will be a long term investment for future seasons.

The hunter will have a good indication for the buck to doe ratio and the age structure of the bucks. If desired, the user can perform a more formal survey that actually determines, to a very high degree of accuracy the precise deer numbers per square mile on a property.

• These cameras are an excellent tool for a wildlife biologist to study deer behavior. Biologists around the globe are have learned that by using scouting cameras they are able to determine how animals live and what they are actually doing at anytime during the year. Images of individuals captured provide factual data and can take the guess work out of the equation.

• The hunter can have year round fun using a scouting camera. It can even be a family affair, especially involving youngsters to get them introduced to the great outdoors. Just to be able to capture nature with a scouting camera is very enjoyable and best of all; you can share the results of your efforts with everyone. The deer hunter may wish to keep their hot spot a total secret. Scouting camera photo contests are appearing all over, and anyone with a scouting camera has a chance to win because most contests will look for an interesting image in addition to a large racked buck.

• Thanks to modern digital camera technology, it hardly cost a thing to operate a digital scouting camera after the initial purchase of the unit.

Summary: All the accomplished deer hunters I know will agree that a victorious hunt begins with hours of scouting and preparation. In the hustle and bustle of today’s society, it is difficult for the average deer hunter to find time to observe and learn the habits of the local deer. The digital scouting camera can do this for you! A scouting camera can play a huge role in how the deer hunter actually hunts an animal. All of the individuals that take their deer hunting seriously view these cameras as a standard piece of equipment, almost as important as their bow or gun, not as a technological excess.

A digital scouting camera will make better deer hunters, because it will show where and when the movement occurs on a hunting property. This information will allow the deer hunter to set up an ambush strategy. It will not, however, give the deer hunter any kind of unreasonable hi-tech benefit that will practically guarantee victory in the field. The one thing that remains a fact is that the deer hunters’ self-assurance will take a huge upward turn once they are aware of any trophy buck that is roaming the woods of their property. They will go into the deer woods with a much deeper understanding of his movement patterns. All the guesses and theories they had will disappear and confidence will rocket as they plan a hunt based on factual sightings. Just remember finding a trophy class whitetail buck is not the challenge. Putting that buck on the ground is the proof of the pudding.

For the best in archery equipment be sure and visit: Bohning Archery

For an autographed copy of Dick’s newly released book Spies in the Deer Woods go to www.spiesinthedeerwoods.com. Also his Radical Bear Hunter, or a copy of his groundbreaking whitetail deer hunting book Radical Bowhunter are available at www.radicalbowhunter.com. All of these great books will literally change the way you hunt.