The Woods Won’t be the Same

by Luke Clayton
in Bowhunting Posts
0 0
A A
1 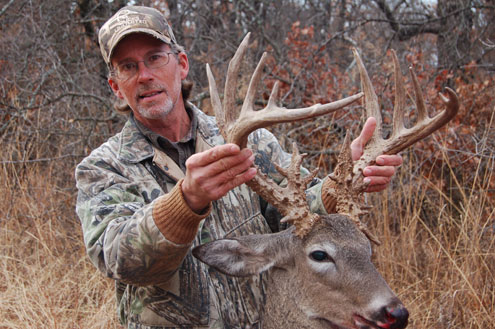 My buddy was an upbeat sort of guy. Keith Barnett was smiling, regardless whether we were sitting around a coffee pot thirty minutes before first light after an evening of staying up a bit too late, or after the strenuous job of dragging a harvested buck out of the hills. Rain or shine, heat or cold, my buddy savored every minute he spent in the outdoors. He loved just being there and his enthusiasm was transparent and infectious.

Keith was all about the experience, harvesting the biggest buck in the woods or turkey gobbler with the longest beard he considered a bonus to the pure joy of being out when the leaves were turning into their autumn hues or, in the spring when the woods were coming to life or, in the dead of winter listening to the mesmerizing sounds of a passing flock of sandhill cranes.

Keith always had a plan to outfox the game or fish that he dearly loved to pursue. As with all things outdoors related, the majority of Keith’s plans were based on solid information he had learned from a lifetime spent in the outdoors but occasionally his plans were based on hunches. I remember one such hunch during spring turkey season a couple years ago that came very close to working out for us. The results were down right comical!

“Luke,” I remember him saying to me before good shooting light one crisp morning in early April, “I’ve been hearing a gobbler sound off every morning from the top of a hill not far from camp. Why he’s there I don’t know. Most of the hens are down in the pecan bottoms, but he sounds like a big one. Haven’t seen him, but bet he would be worth hunting. Let’s ease in there and see if I can call him up. You do the shooting with your bow and I’ll do the calling.”

Now, there are easier things to accomplish than killing a mature gobbler with archery equipment but Keith knew my devotion to the sport. At the break of dawn, at a time when turkeys are usually still on their roost, Keith cut loose with a few subtle hen yelps. His calling was instantly answered by a booming gobble that appeared to be coming from some live oaks only sixty yards away. Within one minute, a ‘sure nuff’ long beard was strutting and gobbling his way to my position behind a make shift blind.

The bird stopped about 25 yards out, turned broadside to me, strutted and stared intently at the hen decoy we had swaying in the breeze. I placed the 20-yard pin on the center of the turkey, nudged the release and sent the arrow on its way. This bird was wired and probably saw me draw or possibly heard the twang of my bowstring. Regardless what spooked him, he spooked! The trophy bird jumped straight up a good 3 feet, my arrow flew exactly where I aimed but the turkey was well out of harm’s way.

When the bird hit the ground, his legs were churning. He was running and flapping its wings in attempts to become airborne. Keith was hid in some brush directly in the bird’s path. For whatever reason, just as the bird left the ground and sailed over Keith’s position, my buddy stood up and attempted to grab the turkey. If there is anything more difficult than arrowing a mature gobbler, it’s catching one with one’s bare hands.

Don’t know if Keith actually touched the bird, but  from my vantage point it looked like he came very close. We spent the next few minutes on the ground rolling with laughter.

Keith had an old saying: “Anything can and often does take place in the great outdoors.”

The big gobbler had proved him right!

The last time I saw Keith, he, my son Drew and I were outside the cabin at the lodge. Keith was about to embark on a new chapter in his life and was looking forward to a move back to the Waco area.

“Luke, you and Drew come down this summer and let’s do some fishing together at Lake Waco or Whitney. Y’all take care and be careful.”

I remember him smiling as he turned and headed back toward his cabin.

My son and I never made that summer fishing trip with Keith, but we did get pictures he sent of a big white bass landed here or a striper there. Keith enjoyed being with his family and friends, back in his old stomping grounds around Waco and China Springs.

Come next spring, I am making plans to be back on this hilltop where Keith and I had the hilarious encounter with the boss gobbler and, to tell you the truth, I don’t care if I kill the bird or not, just want to call him in close and take his picture. It will remind me of my ole’ hunting buddy. I’m positive Keith is in hunter’s heaven now and if there are any Big Woods beyond the Pearly Gates, I’ll know where to find him!

Listen to Outdoors with Luke Clayton radio at www.catfishradio.com.