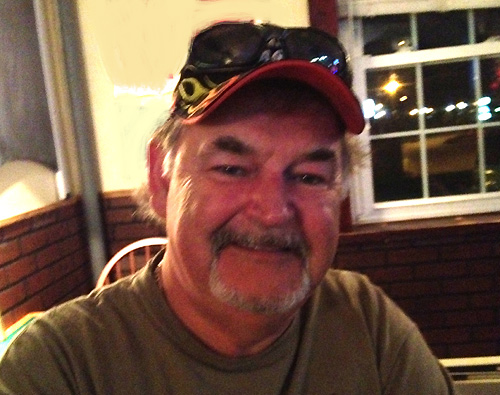 The first bear hunt my bow and I went on was with Ben Pinkham in Maine. That was back in 1978. I shot a bear on that trip as well as on my return trips. When the anti-hunters wiped out Maine’s Spring bear season Ben moved his hunting operation to Colorado and I followed him there. My hunting buddies and I bagged several bears with Ben until the antis got the Colorado Spring bear season too. Ben was an excellent and knowledgebale bear Outfitter and I througherly enjoyed bowhunting with him over the years.

Afterward, I went on a couple of Colorado mule deer bowhunts with Ben but I wasn’t used to, nor was I any good at, making the longer shots that type of hunting requires. But I saw plenty of mule deer and enjoyed being in the mountains. After that, I hadn’t seen Ben for quite a few years until we ran into one another on Facebook.

So this year I booked a bear hunt with my “bear hunting mentor” Ben Pinkham at Sunset Ridge Outfitters out of Howland, Maine. The hunt was a 6 day hunt but due to bad weather I only hunted 4 days. Ben had 3 bear bait sites set up for me and they all were slammed every day. So plenty of bears were in the area. And judging by the large bear tracks and scat we saw big bears were at all 3 sites.

Bears were in my area on day 2 and 3. In fact, Day #3 was a very unusual hunt. After the close encounter with the Day #3 bear, or bears, Ben and I felt like the bear was drawn in by an unpleasant smell that got on my backpack. And while it’s good to have them close, arm’s length is too close.

I feel bad about that for two reasons. First, it distracted the bear(s) from going to the bear bait place in front of my blind’s shooting window. A big part of that was my own fault, because I was the one who carried the backpack to the blind.

And secondly, because I didn’t get a bear. Ben did his job and set things up where there were bears and had them coming in everyday. What happened to me was a freak occurrence but never the less I was the one who caused it.

That said, I have for years, and continue to recommend Bear Pinkham as a black bear outfitter. He knows how to find bears and how to set up for them.

Another speciality of Ben’s is hunts for Trophy Maine Whitetail Bucks. The state of Maine has a “Big Buck Club” and Ben has put plenty of successful buck hunters in that exclusive club.

Sound Advice – Knowing When to Call is the Key to Success