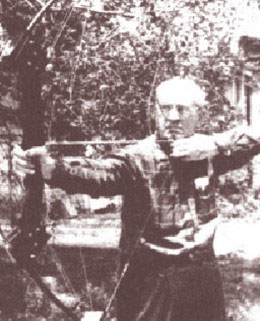 Holless Wilbur Allen 'The Father of the Compound Bow'

IT WAS BACK IN 1972 when I tagged my first deer while shooting a compound bow. Hardly seems possible that 40 long years have passed, because in my mind’s eye the image of that young muley buck picking his way toward me is still as sharp and clear as it was the day it happened in a shady Colorado aspen patch one mid-August morning in ’72.

While I’ve lost count of the total number of deer and other big game animals that’ve fallen to subsequent arrows launched from my compound bows, I’m still amazed at the story of the one twentieth century invention that’s truly revolutionized archery and modern bowhunting. And I’m willing to bet that a majority of today’s compound users – estimated at about 9 of every 10 bowhunters – have little if any understanding of the history of the compound bow.

Briefly, here’s the story. And some facts.

THE ROOTS OF MECHANICAL BOWS predate the birth of Christ, and most notably are represented by crossbows. But it wasn’t until the late 1920s and early 1930s that conventional hunting and target bows – namely longbows, recurves, and self bows – were examined and analyzed from an objective scientific and mathematic viewpoint. And that’s when ideas were first discussed about an entirely new kind of mechanical bow, one with rigid limbs and two linear elastic hinges. Sketches were drawn but no immediate action taken as the decades passed.

Actually, it wasn’t until the early 1960s when a Missouri deer hunter named Holless Wilbur Allen began tinkering with earlier designs and his own ideas. He explained his motivation quite simply: “All I was trying to develop,” Allen said in 1961, “was a bow that would get an arrow to a 10- to 25-yard target – a deer – before the target could move.”

Over the next few years, Allen tried and rejected a variety of bow designs. Eventually, after reading up on kinetic energy in a son’s physics textbook, he tried mounting a small aircraft pulley into the ends of a homemade recurve bow with its ends cut off. By adding a very long bowstring, Allen concocted a promising block-and-tackle effect; however, it still didn’t produce the arrow speed he sought.

Even more time passed. More tinkering followed. And then one evening it all came together. “What if,” he wondered aloud, “I position the pulley pivot hole slightly off center?” Eureka! Within two days, H. W. Allen produced his first prototype compound bow.

Not that the crude device was much to look at. The eccentrics were made of wood, the truss handle made of pine boards, and the limb cores of oak flooring laminated with fiberglass. All this was held together with epoxy, nails, a few bolts, and a few dabs of Elmer’s glue.

Despite its Rube Goldberg appearance, the bow worked! Allen had come up with a mechanical bow that delivered greater arrow speed than any recurve of equal draw weight. Also, his new bow offered a reduction in holding weight (a whopping 15%!), plus the shooting option of using lighter than normal weight arrows.

Allen excitedly filed for a patent on his invention on June 23, 1966. It would be granted three years later. Meanwhile, what is surely the most widely hailed and hated device in archery history, rattled our sport like the Great San Francisco Earthquake of 1906. But it wasn’t easy.

The archery industry’s indifferent reaction quickly cooled Allen’s enthusiam. All attempts failed to turn up a company willing to manufacture Allen compound bows. Allen quickly realized if he wanted to see his bow produced and marketed, he’d have to do it himself. And so he did. In 1967, Allen introduced a limited number of four-wheeled compound bows bearing his name. He also licensed Californian Tom Jennings to begin producing compound bows bearing the Jennings label.

From the very first moment he held and shot an Allen compound bow, Tom Jennings was hooked. A talented bowyer and a partner in S&J Archery, the makers of custom recurves and longbows, Jennings declared there was no reason to continue building stickbows.
“With research and development, [compound bows] should develop into fine, useable, and practical bows. The compound is the ultimate bow.”

SUBSEQUENTLY, DURING THE 10-YEAR SPAN between 1967-77 when only Allen and Jennings compound models were initially offered, more than 100 additional makes and models of the wheeled bows were offered. Virtually every bow manufacturer in North America jumped on the compound bow bandwagon. Although Allen died in an automobile crash in 1979 and didn’t live to see universal acceptace of his invention, its astounding success assured a place in archery history.

Holless Wilbur Allen, “The Father of the Compound Bow,” and Tom Jennings, the man widely known as “Mr. Compound Bow,” are each members of the Archery Hall of Fame. And both are hailed as visionary contemporaries who made a lasting impression on an ancient sport. Keep them and the true story of the compound bow in mind next time you pick up your bow and head for the deer woods.
For more on Holless W. Allen please go to: Archery Hall of Fame: Holless W. Allen