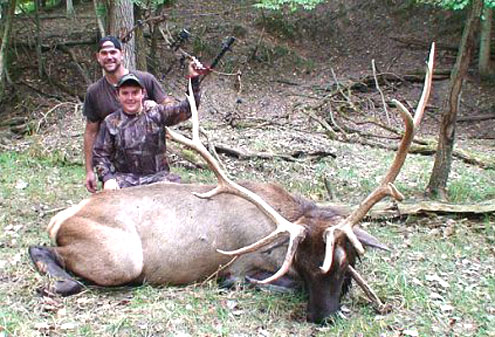 Ty and Mike celebrate over Ty's first bull elk kill with a bow.

Many of you know that I had an awesome safari adventure with my best buddy, Captain Mike. So, how do you top an African safari with Captain Mike? Go elk and gator hunting with him!

Mike drove in to Texas from Florida. We packed my gear and we were off to Louisiana to pick up Scrounger and his son Trent. It was late afternoon when we had Mike’s truck and Scrounger’s trailer packed to the gills with chest freezer, generator, coolers and everything but the kitchen sink. I was sure to pack my most important items; Alpine F1 Fireball,  Dead Down Wind Soap and my HECS STEALTHSCREEN!

We had an 18 hour trek ahead of us but the good news was that Captain Mike and Dad love to drive! They drove in three hour intervals and had a bunch of energy drinks. Those two talked and laughed the entire trip! After what felt like forever, we finally arrived at Uncle Jim’s. I would love to tell you where Uncle Jim’s place is but the Scrounger would get upset at me if I told y’all about his secret spot. How he found this elk honey hole, I will never know?

We all caught our second wind and started to unpack. In the distance toward the creek bottom the elk were screaming. Needless to say we kicked the unpacking chore into high gear, like mach 2 speed! Actually we didn’t completely unpack because we knew the elk could roam out of the area so we grabbed our bows and took a couple of quick practice shots to make sure our bows were not bumped off during travel. Unfortunately black clouds were moving in and the thunder was rolling. The faster we moved the blacker the sky got but we didn’t care about the weather. We were focused on one thing, at least spotting an elk.

We piled in the truck and traveled as close to the creek bottom as we could without risking the possibility of pushing the elk off the property in an effort to beat the fast approaching storm. Captain Mike dropped Dad and me off so we could move into the area on foot. We were both wearing HECS STEALTHSCREEN clothing for energy concealment and Dad had the camera. I had a firm grip on my Alpine F1 Fireball locked and loaded.

As we were stalking down a shallow ravine we could hear antlers smashing together and brush breaking. I’ve never heard anything like it before! We picked up our pace to close the distance faster thinking the fighting bulls would have no idea we were there and as luck would have it we came face to face with an old cow.

She busted out of the brush like a bulldozer but lucky for us it was toward the East and our bulls were fighting to the North! It was warm, a stiff breeze blowing across our faces and the feel of rain was in the air. The ground was still wet from this morning’s rain which made for silent stalking and the trees full foliage provided great cover for our stalk.

As we eased up, the old bull looked up, my heart stopped but he merely sniffed the air and then resumed drinking from the slow moving stream that had bubbled up from the rocks 50 yards to the north. Dad and I both had the same question; where was the other bull that he was fighting with?

I slowly came to full draw and noticed movement to our right and there was the other big bull. Dad hit the range finder and whispered “46 yards”. The bull had a large wound on his lower shoulder from the encounter. I settled my pin above and slightly to the right of the blood spot and touched the trigger of my Equalizer release.

The arrow sunk into the sweet spot! The bull lunged across the creek and disappeared into the brush with the broadhead exiting the opposite shoulder. We tried to celebrate quietly but the excitement was too great to contain. Our celebration was cut short by sounds of brush breaking as the bull tumbled back down the hill toward us and fell in the creek. Now we exploded – my first elk down!

I couldn’t wait to walk up to the beast! Dad followed me with the camera as I peeked over the creek edge to see my bull lying in the red creek. Yes red! The broadhead did some major damage and literally turned the creek red! We have never seen anything like it! We took some photos in the creek but I wanted to get some good photos with the gear that made the hunt so successful. It took five of us to get that bull out of the creek but great pictures are worth the effort! Shortly after the pictures were taken the rain started.

After we caped my elk and processed the meat we all were talking and making plans for the next days hunt when Uncle Jim received a call from a friend that had spotted a big elk. We had an hour of daylight remaining so we jumped in the truck and headed in that direction. We arrived just before dark because we made a couple of wrong turns. We were fortunate enough to spot several cows and a MONSTER bull but we had no time for a stalk. I knew Captain Mike, Dad and I would be back in the morning.

After a restless night we were soon in the truck and headed back to hunt the monster bull. Captain Mike and Dad decided to follow a ridge line and I went toward the pond to see if I could spot some elk. If I did, the plan was for me to walk out the ridge line and let Dad and Captain Mike know. It took me a while to work my way to where I could see the pond through the thick brush and sure enough I spotted elk!

I slowly eased out of the area to catch up to the guys and tell them about the elk. It took me a little while to find them but when I did they both had this big grin on their faces and I’m wondering what was so funny? I start telling them about spotting elk and they start laughing and pointed across the small steep ravine. Holy smokes I could see the massive rack! The closer we got the bigger the rack became! Captain Mike stuck a monster and Dad captured it on video! We worked hard to roll the elk and position it for some awesome in the field photos.

I ran back to the truck to get a tarp for the skinning and quartering process. As I was caping out the elk Captain Mike told me the story; He and Dad were stalking along the ridge looking and listening with a slight breeze hitting them in the face. They stopped behind a deadfall and a large tree for a few minutes just to glass and listen. They were not there fifteen minutes when Dad spotted movement to their left amongst some brush. Two cow elk browsed in front of them at 22 yards as they tried to blend in to the brush and prayed the wind would not swirl. Shortly after the cows walked through the monster bull walked in with his massive antlers hitting the over hanging branches of a tree. He had no intentions of stopping so Dad made a bleating sound to stop him. Captain Mike was already at full draw and the second the bull stopped he sent an arrow through the bull’s pump station! The bull went down within 50 yards!

We loaded the meat, cape and horns into the back of Captain Mike’s truck and headed back to Uncle Jim’s place to see how Trent and the Scrounger did on their hunt. On the way back to Uncle Jim’s we stopped for gas and a sandwich. The massive rack sticking out of the truck bed attracted a lot of attention so we ended up telling and retelling the story many times that day. Even when the three of us got back in the truck we told the story to our selves, again!

We laid out a plan for the afternoon to help Trent and Scrounger chase an elk. When we arrived back at Uncle Jim’s we were surprised to see a caped out 7 x 7 bull! Trent connected but all was quiet at Uncle Jim’s, not a creature was stirring, not even a mouse. Until the gang showed up with Scroungers 5 x 5 bull! Whooohoooo! What a trip! I still can’t believe it! Unfortunately Scrounger is not much for taking pictures so the only photos I have of Trent’s monster was taken with a cell phone.

What could possibly top this elk crazy trip? Well, wait until I tell you about the gator hunt!