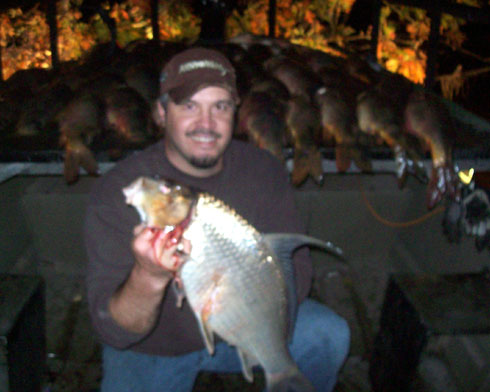 As soon as the leaves start to change colors and the air is filled with the aroma of fall hunters and outdoorsman alike start to get excited about the fall hunting seasons opening! With the closing of fall waterfowl and opening of bear, whitetail, and fall turkey hunting, the lakes, rivers, and flowages get left behind as hunters head for the forest. Being a bow hunter myself I still get the itch to hit the woods on opening day but instead I hit the water searching for carp. This type of bowfishing feels

Special, being able to hit the water when the temps drop, trees change color, and less fisherman around. With the water clearing up it brings the excitement of bowfishing back to what it was like during spring shootings. The water is clear, the fish are plentiful, and the temps are comparable to early spring. 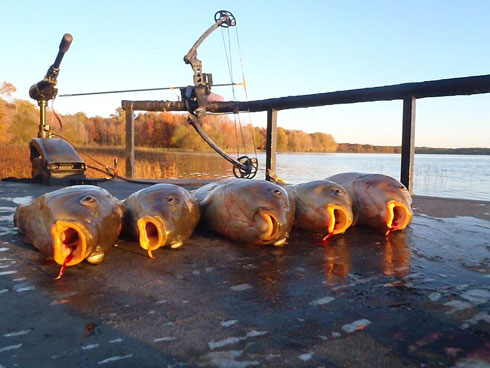 One of my favorite reasons to go bowfishing at this time is occasionally having the entire body of water to myself. This allows me to scout new spots see tons of fish moving back into the shallows and time away from the woods to let the deer come into rut. 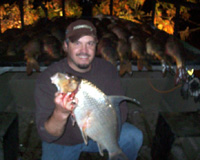 Last year one of my last bowfishing adventures up here in Wisconsin was October 9th and the three of us didn’t know what to expect. Being so late in the year and haven’t been out for a few weeks our expectations were low. After getting the landing early putting the boat in and watching the sun go down it was time to fire up the generator and see if this was going to be a slow night on the water. We quickly realized this should turn out to be a great night considering the water has cleared up tremendously since the last time we had been here and the fish moved into the shallows!

With the average daytime temps being in the 50s-60s the water has cooled off and that brings some of the big Common and Buffalo Carp out of the deep water and into view from the bowfishing platform. That night we had the water all to ourselves and could have been shooting fish until the sun came up. This short adventure educated us that some of the best bowfishing happens when you may least expect it, we ended the night with 39 nice Commons/Buffs and a few really nice Quillbacks. After having the water all to ourselves, finding some new spots to check the following spring, and shooting some great fish we are looking forward to a lot more fall bowfishing adventures! 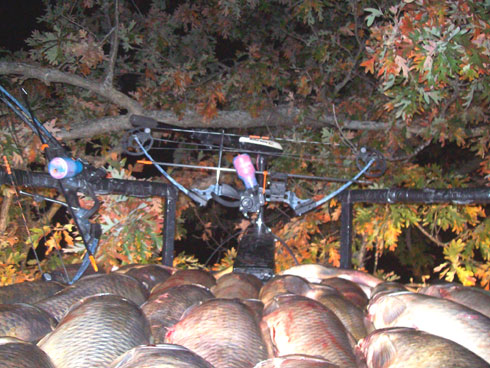 This fall season will be different then the norm, I’ll be spending more time on the water looking for some fall bowfishing before I start to hit the woods. Here in Wisconsin the whitetail rut typically is running pretty strong from late October to mid-November. Well the early season is a great time to hunt big bucks feeding it’s also the time you may be ruining your fall hunt by spending too much time in the woods. By keeping my scent and movement out of the woods until the time is right I’ll not only get to bowfish during some of the best bowfishing of the year but I’ll hit the woods with confidence that the deer won’t be expecting me.