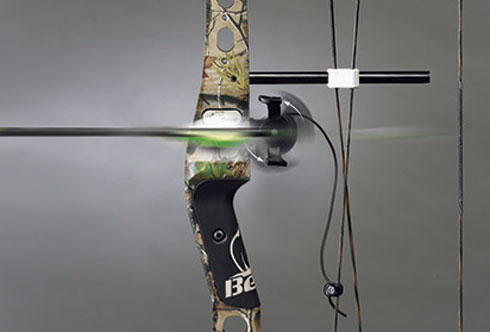 A perfect release with full clearance for the most accurate shot possible.

When it comes to arrow rests, there are a lot of choices in today’s market. For the bowhunter, the two main traits we look at are containment and clearance. We want a rest that allows us to lock that arrow in and forget about it until the shot is long gone. Numerous ideas have come along that focus on containment. Most of those, while fixing the containment issue created clearance problems. Trophy Ridge’s Revolution Fall Away Arrow Rest fixes that issue in a big way, providing complete and dependable containment, and the most clearance in the industry. What else would you expect from the company that invented full-containment technology!

No other fall away rest delivers this level of containment. Just load it, lock it, and then forget about it. Nock your arrow, rotate the Revolution’s launcher arm into position and you are locked and loaded. Now you can concentrate on making that good shot, and not on your arrow. The arrow will stay contained (locked) until your bow is drawn and released.

Releasing your arrow use to lead to the second problem – clearance. No other fall away rest on the market delivers the same level of clearance as the revolution. No matter what size fletch you use, you will have complete clearance, with plenty of room to spare! The Revolution clears the arrows path instantaneously with zero bounce back. This is the most vital aspect of fall away technology.

The Revolution was designed for quick, easy setup. You’ll be on the range shooting your new Revolution rest just minutes out of the box. The Revolution’s internal components fine tune the timing to your bow’s performance – maximizing performance while minimizing setup.

At full draw, your arrow remains completely contained. If you don’t get your shot, the Revolution remains in containment position after you let down.

And when your shot does reveal itself, the Revolution will deliver a level of silence and clearance that is unmatched by any other fall away rest. In fact, the Revolution provides the greatest level of clearance regardless of fletching size.

The Revolution’s launcher arm is engineered to provide support as the arrow is released and quickly rotate out of the fletching’s way – while its internal mechanism prevents bounce back and dampens noise to deliver a dead silent shot.

Overall, I would highly recommend the Trophy Ridge Revolution Fall Away Arrow Rest to everyone. This is the arrow rest that I use on all of my bows. Trophy Ridge by Bear Archery has done a fantastic job in designing this arrow rest. This is yet another great example of the benefit of having real engineers building hunting products!

for more go to: Trophy Ridge by Bear Archery, Bear Archery And Best Arrow Rest or shop Amazon below!