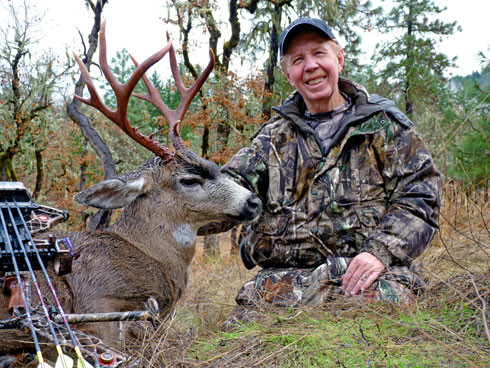 Another great blacktail falls to author.

One day I looked at the list of states I had hunted and realized one state I was missing was not too far away. So in November my wife, Shelby, and I were on the road to hunt blacktail deer in Oregon. That would make 23 states that have sold me a hunting license.

If you have never been there it’s beautiful. Mountains, streams, and thick forestation are eye catching. One drawback – it rains a lot in Oregon. Without it the thick vegetation would not exist. Being aware of the weather we included good rain gear in our bags.

I had done some homework before the hunt and one individual was recommended by more than one of the people I called. Steve Lee owns a small piece of property in the southern part of the state. Steve is not an outfitter or guide but simply charges for trespass rights. His farm is small however one unusual aspect of the property is that deer tend to migrate through it as winter comes on.

First to pass through are the does followed by the bucks since the migration occurs about the same time as the rut. All of this makes for some great hunting opportunities.

We got settled in our motel and the next morning met Steve and agreed to follow him to the hunting area. As I mentioned there are mountains in Oregon and we drove on a narrow, winding road up a mountainside in the dark. Finally we topped out, parked and walked to our blind.

We video most of our hunts and hunt out of a Double Bull blind whenever possible. The blind allows us to move freely while filming and offers shelter from bad weather. Thank goodness we had the blind to keep us out of the rain we encountered during the hunt.

As daylight came, we immediately began to see deer moving around us. Lots of does and fawns fed on the mountainside and kept us entertained in the early hours. From time to time we saw bucks, but nothing that piqued my interest. I was fortunate to have taken a nice blacktail a few years before in California so I was going to be picky. At the end of the day we had seen many does and a few small bucks.

On the second day we sat up in the blind and were smothered by fog. The fog came and went several times. When it finally cleared we saw a decent size buck following some does. The rut was definitely on. He kept his nose to the ground as he trotted from one doe to the next never letting them out of his sight. The buck followed some does to a wooded area to our left and remained there for some time. Not finding any does that were interested in him, he decided to move on and check out some other does. As he did, he moved in front of our blind, stopping at 20 yards broadside.

In no time, I had my bow drawn, aimed and released. The buck took off to our left followed by some of the spooked does. I felt confident I had made a good shot, but nonetheless we waited for an hour before we attempted to follow him.

Intermittent rain had pretty much obliterated any chance of following a blood trail. We asked Steve to help us track the buck and we scoured the mountainside.

Shelby is the better tracker of our duo and she again proved it on this trip finding the buck lying in the bottom of a ravine about 100 yards away. It was a nice buck, full bodied and sporting a nice set of horns. Later I had him scored for Pope & Young. He grossed 113” and netted 108 1/8” exactly the same net score as the buck I had shot in California five years before. In case you don’t know, the minimum for inclusion in the P&Y record book is 95”.

We’ll be going back to Oregon one year to collect a buck for Shelby and it will be my turn to carry the camera. If you get a chance, give Oregon a try.

What About Using Good Scents?