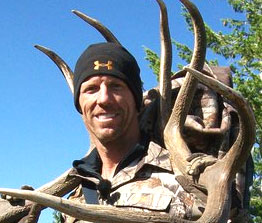 Last week William “Spook” Spann was charged in the U.S. District Court for the District of Kansas for violating Federal hunting laws.

In count one, the indictment ‘alleges’ Mr. Spann knowingly engaged in conduct involving the purchase and transportation of wildlife with a market value in excess of $350.00, that is, a white-tailed deer (Odocoileus virginianus), by knowingly buying the wildlife and transporting its antlers in interstate commerce between Kansas and Tennessee, knowing the wildlife was taken in violation of, and in a manner unlawful under, the laws and regulations of the State of Kansas, specifically, Kansas Statute 32-937(b) (valid big game permit required to take big game within the state).

In count two, the indictment alleges Mr. Spann knowingly engaged in conduct involving the purchase of wildlife with a market value in excess of $350.00, that is a white-tailed deer (Odocoileus virginianus), by falsely reporting to individual L.Z., the owner of the land where the wildlife was taken, that the wildlife had not been taken on L.Z.’s land, an offense that involved the purchase of the wildlife and transport of its antlers in interstate commerce between Kansas and Tennessee.

The ‘alleged’ event took place in November of 2007 when he harvested the largest non-typical whitetail deer to be captured on video with bow and arrow. Mr. Spann has spent many years on television, hunted all across the world, and has made many friends in the outdoor industry. He has always been one to follow the letter of the law and to exhibit appropriate conduct while afield.
Mr. Spann, his attorneys, and his advisers are cooperating with the judicial process in hopes to resolve this matter as quickly as possible. Mr. Spann does not believe he violated any Kansas or Federal gaming laws and he had permission from the landowner to be on the parcel where he harvested the deer.

There have been reports alleging Mr. Spann “purchased” a deer or “poached”. Those statements and allegations in those reports are absolutely and demonstrably false. This deliberate misinformation is inaccurate and intended to maliciously harm the hard earned reputation of ‘Spook’ Spann. The video of the hunt in question has been seen by thousands of viewers on Realtree Outdoors on the Outdoor Channel; made the cover of Realtree’s Monster Buck DVD
series, and was featured in North American Whitetail magazine. The footage of this hunt also aired on Spook Nation (Season 1) as seen on The Pursuit Channel.

Information circulating on the Internet is not always true, and that the factual details of the circumstances involving the event that transpired almost five years ago will clear Spook’s name.

Spook is maintaining a positive and optimistic attitude throughout this and relies heavily on the support of his family, his faith, his friends, and his sponsors. His contribution to the outdoors industry over the last decade is well documented and he will continue to do what he considers the best “job” in the world.Spook reassures the Spook Nation following and the entire outdoor industry of his personal commitment in clearing his name of these allegations and moving forward with his love and passion of not only hunting, but spending quality time with those he partakes in the outdoors with.

Please submit all media inquiries to info@spookspannsupporters.com.
About ‘Spook’ Spann: Spook’s success in the whitetail world has been phenomenal. To date, he has harvested numerous Pope & Young whitetails and multiple Boone & Crockett whitetails. He has harvested over 20 different big game animals around the world. Spook Nation appears on Monday nights at 9 pm Central on the Pursuit Channel.