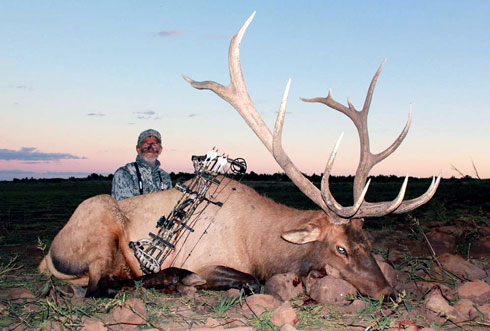 The Wallow Bull proved to be even bigger than Robb and guide Jon Vance thought when the videotaped him the evening before opening day. He taped a gross 360 Pope & Young Club points.

“The Arizona draw results are up online,” my buddy said. “So what?”, I thought, “I never draw anyway.” This was back in May, but when I went to the website and saw that, after 10 years of applying, I had picked a coveted September archery elk tag, I about peed my pants. Are you kidding me?

Having been down this road before, I knew that having the tag is just the beginning of a long quest at getting a shot at a good bull. Despite what many of you might think, the days of accruing bonus or preference points in several states each year, then when you draw just showing up, hunting on your own and arrowing a big bull or buck is not as easy as picking blueberries in a year of good rain. That’s why, even though I have 40 years of serious on-your-own western hunting experience under my belt, without hesitation I called my friend Gary “Goose” Howell of Flagstaff, Arizona (www.howellwildlifeoutfitters.com; 928-606-3021) and booked his services.

Goose has over 20 years of experience in the outfitting business in this region. In fact, he is so good he has been selected by many well-healed hunters who have purchased governor’s tags in Arizona and elsewhere to be their personal guide. Goose has been at it for a long time and knows his stuff. Best money I ever spent.

I made two scouting trips with Goose and guide Jon Vance, and we came up with a game plan. We made camp 3 nights before opening day and hit the ground running. For 4 months prior to that I had been shooting my bow 5 mornings a week before work. My setup is a 28-inch Hoyt Carbon Matrix bow, 28 ½-inch Beman ICS 340 shafts tipped with 125-grain Thunderheads fletched with NAP QuikFletch for a total arrow weight of 425 grains; raw arrow speed is right at 270 fps and it shoots like a dream. Plus I upped my regular fitness regimen, which was a good thing, since Jon’s GPS told us that in 4 days we had hiked something like 47 miles over bad ground in search of Big Tobey.

The evening before the season opened Jon and I were scouting when we spotted two big bulls wallowing on an open lakeshore. One Jon — who has guided numerous hunters to giant AZ bulls over the years — figured was a 350-class stud. We called him The Wallow Bull.

We spent the next several days in the middle of the elk and in fact I was within shooting range of 3 bulls Jon and I both thought would push 350. Problem was, we were hunting in the thick cedars and even though we were close, there were not shots.

On the end of day 3, after we had put in 16 miles of hard hiking, we ended up near the first evening’s wallow. About a half mile further down the lake I spotted a giant 6×6 bull with cows. Jon cranked the video camera up and I took off running, circling into the trees in hopes of getting close enough.

By the time I got there it was too late, but another giant bull bugled hard and began running cows after leaving the tree cover from a spot behind a small peninsula that blocked his entry from my view. I watched him for 30 minutes but the closest the cover would allow me to get was 120 yards, so not wanting to bugger them I backed off. Jon’s video is impressive.

I should add here that, in addition to everything else, it had been an extraordinarily wet year in this unit. There was water everywhere and those who chose to do the usual AZ thing and sit tanks were grossly disappointed. It also meant that near standing water the mosquito hatch was so big it reminded me of summer in Alaska. Thus, I was wearing 3 layers of makeup — sunblock, face paint, and bug dope! One had to monitor the wind at all times, for sure!

Next morning Jon and I hunted near the lakeshore and called in a small 5×5 to 12 steps, we passed on. Pressure from other hunters had taken its toll by now and daytime bugling had dropped from the raucous screaming of the first 2 days of the season to a stray bugle here and there. Thankfully our scouting and hard hunting had shown us where the elk were living and traveling, so we had a plan. At lunchtime I showed Jon where the big bulls had come out of the trees and crossed the small isthmus. “I brought some blind material with me,” I told him, “I want to build a blind in the snags trees right here and see if we can get lucky this evening.”

And so I did. I set some yardage sticks in the ground and topped them with wicks dipped in Wildlife Research Center’s Elk Fire cow estrous scent in case something came in downwind and by 3:00 p.m. I was nestled in with some snacks, water, and a good paperback to help pass the time while Jon went to check trail cameras and do some scouting. By 5:00 p.m. the plan was for him to be back where he had videoed the action from the evening before, since sitting this tiny blind was a one-man game.

It is too dark to shoot by 6:30 but by 6:00 p.m. I had not heard a bugle nor seen an elk. No matter, this is prime time. Then out of nowhere several cows and calves came out of the woods 45 yards upwind of my blind, passed behind some snags and stopped to feed on the open grasses. My Nikon Archer’s Choice Rangefinder told me was 60 yards off. “If a bull comes out I can make that shot!” I thought. Then I looked up and, to both my surprise and horror, a huge cow was standing not 30 yards from my little semi-open blind staring my way! Oh, no …

But she looked right through me — thank you, Optifade camo! — turned her head and walked toward the other elk, her calf in tow. At that same moment the bugle almost took my hat off! Right where the cow had exited the thick cedars the bull screamed and trashed a tree! Then I saw his antler tips just over the tops of the cedars as he made his way toward the cow. When he stepped clear I was already at full draw.

Two steps and he was broadside, 27 yards and I cow chirped. He stopped and swung his head my way but by then the arrow had been launched. In a blur the fletching disappeared right behind the shoulder. Perfect double lung hit. I watched him race through the cows, across the water and onto the other shoreline. He only made it about 100 yards before piling up. Jon’s video doesn’t get the shot but it shows him about 20 yards after impact until he goes down.

Ohmygawd! The plan worked! Later, after pictures and butchering and meat packing, back at camp we plugged the video into the little TV Goose has in his trailer. That’s when Hunter Weems, a cool 18-year old who wants to be a guide and will end up a really good one, said, “That’s The Wallow Bull!” Neither Jon nor I had noticed the 2 little extra points on the end of the left beam when we had videoed him the evening before the opener but there they were. We had shot the bull we had hoped to find, something that made it even more special.

That the bull gross-scores 360 Pope & Young points is nice but it doesn’t define this hunt. It was the fact that, as a team, Goose, Jon and I had done our homework, constructed a game plan and then hunted our petunias off to make it happen. And so, after all had gone to bed in preparation for the next day’s hunt (Goose had another client in camp), I sat alone out under the stars, thinking. Orion’s belt was visible in the Milky Way and a sliver of moon rested just above the horizon in the cloudless sky. How lucky we are, I thought, to be free men and able to enjoy the great outdoors. We sometimes take it for granted that it will always be this way. That night I prayed that, for the grandchildren, it will always be so.