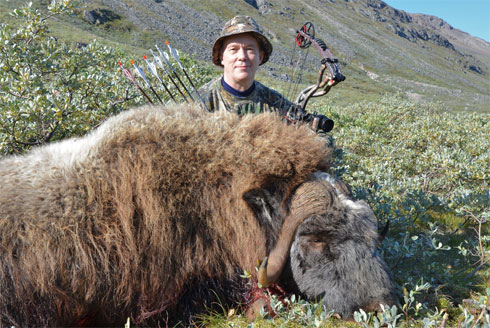 Blazer® vanes make bowhunting history in Greenland! When the eyes of the world are judging the effectiveness of bowhunting… the pro’s DEPEND ON BLAZER® VANES!

Last month, my friend, Anders Gejer from Sweden contacted me about the good news in Greenland and asked if I was interested in joining him and two other bow hunters from Finland for the first ever archery musk ox hunt!

Years ago I looked into a musk ox hunt in northern Canada, but learned the hunt was more a survivor test against the cold weather and wind. And to be honest, not much of a hunt. When Anders informed me the Greenland hunt would be spot and stalk, I knew this was for me.

Prior to our hunt, you could tell all the Inuits thought we were absolutely crazy to attempt to take a musk ox with a bow! Without a doubt, their minds were made already made up! And because the Wildlife Department in Greenland did NOT believe a bow could bring down a musk ox they had an “observer” tag along on all our hunts.

After Juha Kylma – President of the European Bowhunters Federation from Finland tipped over the first musk ox, we thought the observer and Inuits were upset because it went over 200 yards before it fell. What we learned was the Inuits generally shoot musk ox with a .375 H&H (Holland and Holland). On average, they shot 2-3 rounds per animal then watch the musk ox run anywhere to .5 to 1.0 mile away. Evidently, the bang-bang makes them run further then with a bow kill. Because of their limited bow knowledge, they simply couldn’t believe the efficiency of our bows! Our opinions of this hunt were completely opposite of what the Inuits were thinking! Obviously, perception is everything!

The next bow hunter from Finland killed his musk ox with a perfect shot and it went about 50 yards before it collapsed! Without a doubt, we were making a lasting impression on everyone. They even granted us “test” reindeer permits, but the weather turned bad and we had to leave camp. Next year, the outfitter (Frank Feldman at Bowhunting Greenland) will have combination hunts for musk ox and reindeer! And yes, Frank bow hunts himself and is the one and only bow hunting outfitter in the country!

Although travel to and from Greenland can be troublesome (2-1/2 day to arrive and 5 days to get home), this hunt was one of the best I’ve ever experienced.

Remember, when you have to depend on your archery gear – You can always Depend on Bohning Archery.

Bohning Archery – making history one shot at a time.

Shaky Optics? Steady Out with the STEDI STOCK II