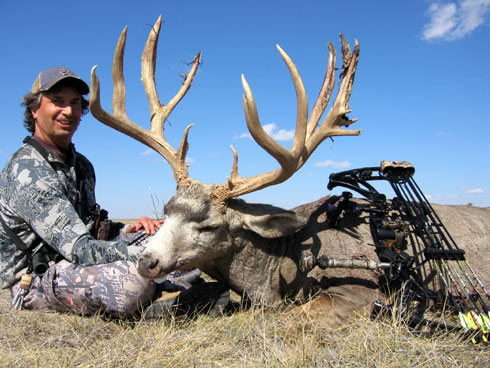 It was Oct 1 and I was hunting the eastern plains of Colorado with Atkinsons Expeditions. My buddy and expert guide Jeremy Fiscus had been doing a lot of scouting in this area and found an exceptional buck hanging out pretty consistently in a volunteer Sorghum patch. The closest Jeremy had ever glassed him was a mile and a half since he didn’t want to take a chance of bumping him out of his pattern. He figured the buck was in the 195″ gross range which was what I was hoping to hunt.

After a good nights sleep we hit the coffee and then hit the ground running ready for some great mule deer action. We picked up a big framed buck the first morning but due to hazy conditions we were not sure if it was the buck Jeremy had been watching. We watched as walked over a small ridge and bedded down out of sight. We knew the general area but were not sure of his exact location. We discussed strategy and decided to go ahead and make a stalk.

The conditions were perfect for a stalk. No other deer that we knew of were near him and a 15 MPH wind blowing the Sorghum leaves helped cover our approach. Wes Atkinson (owner and master guide who was filming the hunt), Jeremy and I slowly closed the distance, methodically picking apart every patch that was big enough to hold a deer. It took several hours and at 65 yards Jeremy made an incredible spot of his antler tip. I nocked an arrow and kept ranging his location in case he caught us and I had to act quickly. I would have stopped at 40 yards but the heavy cross wind that was helping us get close was also going to make it harder to make a perfect shot so I moved closer, finally stopping at 30 yards.

I took my Tight Spot quiver off to minimize the effect the wind would have on my trembling bow. Now it was a waiting game, no rocks, whistling or game calls this time. I have waited a long time to shoot a buck like this and a couple more hours wasn’t going to kill me, just him.

I decided to stand instead of kneel to be more comfortable, I knew I couldn’t do 8 hours on my knees. After 30 minutes I could see the buck’s antlers sway as he started to stand. As he did, I came to full draw before he completely stood up so he wouldn’t catch the movement. He looked right at us with only his massive antlers and throat showing and the rest of his body hidden behind the Sorghum leaves. His body language was not overly tense but after 15 seconds I knew he wasn’t going to relax and step out so, my instincts took over. I settled my 30 yard pin where I hoped his vitals were and executed the shot. The hit sounded solid and as he bounded into view a large red dot kept enlarging right in the sweet spot as both my boys acknowledged the hit with a “You smoked him”!

The massive buck bounded about a 100 yards, did a little right turn and folded. Wes was the first to comment on his antlers being a little ‘Over sized’. As we followed the ridiculous blood trail that the Ulmer Edge tipped Victory VAP created our anticipation of what class of buck we had just taken was blown away.

He is an 11 by 7 with a 226 4/8 SCI official score, a 209″ main frame and a P&Y green sore of 203″. For you spread guys his outside on the stickers is 29 3/8″. It took a lot of research, preparation and team work to make this happen and I feel both lucky and blessed to have been able to close the deal on such an exceptional animal.