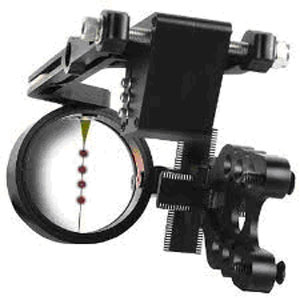 Recently Frank, one of our field staff, had the assignment of trying the new bow sight from Tactical Archery Systems called the S.A.B.O. Generation 2 Bow Sight.

The SABO sight was inspired by US military technology for rapid target and aiming point acquisition. It is a Superimposed Ambient Ballistic Optic designed specifically for archery. The superimposed dots are generated by ambient light gathered through fiber optics. No electronics are required, which makes it 50-state and Pope & Young legal.

Frank and I both had our reservations about this sight at first, being used to a fixed pin sight; but, we figured if the military uses this technology and it was legal to use, what the heck, Frank would give it a try.

The set up and sighting in of the sight took a little more time than with pin sights due to unfamiliarity with this sight. Now, after doing it once, the time is cut in half. The instructions were well directed and made the process less difficult. The main difficulty is that you must stay away from your knowledge of a basic pin sight set up at first, during the acquisition of the dots process. During this process you are aligning the top dot with the tip of the lens triangle ensuring that the shooter is executing proper form and anchor for unprecedented accuracy. Once you have established the first dot the process is just like a pin sight set up.

The SABO Generation 2 sight has four dots. Frank only set two dots for hunting, using the first dot as his 20/30 yard dot. There was only a three inch difference between his twenty and thirty yard shot. The second dot was set for forty yards. If you were planning on longer shots this sight had two more dots to extend your shooting range.

After setting it up per the instructions Frank was now ready and begin shooting. Achieving quickly some of the tightest groups he has ever shot, due to the built in anti-torque system that helps eliminate hand torque.

Frank stated that his old sight would often “halo” his target area. The superimposed dots give you more precise aiming area and more efficient aiming ability. While using the sight the second day he ruined two arrows due to a Robin Hood at 30 yards. I believe Frank has found a sight he is sticking with.

He utilized the sight outside under all lighting conditions and the dots were easily seen at all times, but may require the use of a sight light at very low light periods. In this case, you will need to purchase a third party one. Frank found that if you could also use a portable green or red light, like the hat lights that clip to the bill of your cap, for your source of ambient light.

Rain was also simulated with a spray to the lens to see if this would distort or stop the dots from showing up. There was no difference, the dots were just as visible and the shot was just as true.

For more information on this sight and other products visit, http://www.tacticalarcherysystems.com/

Testing of the sight was done by Frank Anthonis Field staff for Garysbowhunting.com