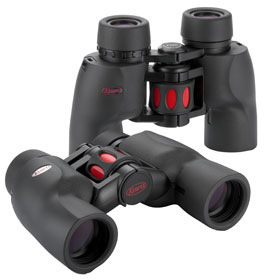 Get Kowa’s superior optical performance at an affordable price with the SV and YF Series binoculars. Both the SV and YF have the same sought-after features as their more costly counterparts. In addition to being fully waterproof and dry-nitrogen-gas-filled, both binoculars feature fully multi-coated lenses and prisms.

The SV Series is phase coated and has a highly reflective coating that minimizes the loss of light producing a clear visual range and sharp image. The SV series also features an objective focus mechanism, which reduces cost without sacrificing optical performance.

The lightweight and stylish design of the YF and SV Series allows for extended use while hunting. The YF Series is available in two magnification sizes, a 6X and 8X magnification model. Both include a 30mm lens and weigh less than 16.7 ounces, making the YF ideal for the hard core hunter who appreciates lightweight gear.

Both the YF and SV are coated with two types of rubber armor with depressions that make it easy to grip and hold. A wide, comfortable fabric neck strap is included to keep the binoculars handy when needed for use. Quick central focusing, long eye relief and twist-up eyecups, all protected by the KOWA KR coating, are also built into each series.

Kowa has produced high-quality binoculars you’ve come to rely on, and the new SV and YF series binoculars are no different. For superb optical performance without the hefty price tag, make sure to grab the Kowa SV or YF Series binoculars for your next hunt.