by Jason Herbert
in Bowhunting Posts
0 0
A A
2 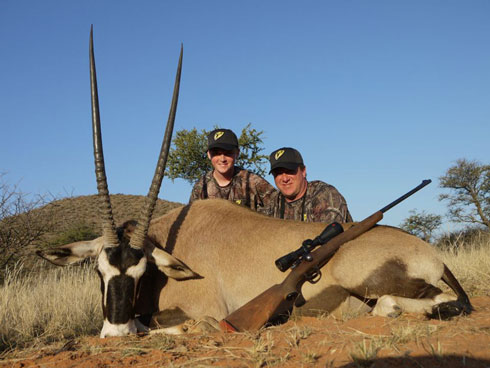 With the sweltering heat, miserable humidity and plagues of biting bugs, most people wouldn’t think about hunting in July. But while Scott Shultz, Michael Waddell, and Russell Schwahn were stalking big game throughout the dark continent, the record setting heat, humidity and bugs back home were the last things on their mind. Due to the tilt of the Earth on its axis, the Southern Hemisphere experiences their winter while we, in North America, are enjoying our summer.

Russell Schwahn was the lucky winner of Robinson Outdoor Products “Win a Hunt in Africa” Contest. Not only did Russell win the chance to hunt in Africa, he would also be sharing camp and hunting with outdoor legends Robinson Outdoor Products President Scott Schultz and Michael “Mr. Bone Collector” Waddell. The hunting adventure was being hosted by Wintershoek/Johnny Vivier Safaris of Northern Cape Province, South Africa. Winning this contest was truly an opportunity of a lifetime for Russell.

Humbly supporting his family by working at the fire department, Russell Schwahn is an All American, down to Earth, nice guy. “Down at the department we’re always playing jokes on each other. The guys at work knew how hard I was trying to win this contest. I didn’t believe it at first when I got the e-mail saying, ‘Congratulations…’ I thought one of the guys was pulling a prank.” Russell later received a call from Robinson Outdoors President Scott Shultz confirming that he was in fact, the winner. Then they got down to business. Schultz told Russell that he could bring someone along to hunt as well. He immediately asked if his son, 16 year old Dylan could come. Shultz got really excited at the thought of a father/son hunt because he was in fact bringing his grandson along as well. “Of course” Shultz replied and the date was set.

“From the point when we all arrived in Johannesburg and shook hands, Dylan and I were treated like family. I mean Michael, Scott and everyone else involved in the trip literally treated us like part of their family. They were just as nice and friendly as we see them on TV.” Russell said they saw thousands of animals per day, but the hunt wasn’t an easy one. “We walked at least 6-7 miles per day the first few days.” Scott Schultz made sure Russell and Dylan were well equipped by getting their sizes and sending them brand new ScentBlocker boots, pants, and jackets for the trip. “We really had to hunt with the wind in mind and the gear came in really handy. “The weather was nice; cold and frosty in the morning, while warming up to the 6o’s before cooling off again in the evening. “The sweepstakes included eight animals, and Russell and Dylan decided to share. Between the two of them they harvested many native African species such as Eland, Impala, Waterbuck, Gemsbuck, Zebra, Red Hartbeest and Wildebeest. Schwahn ended our conversation by describing the accommodations. “Everything was top-notch; from the staff, to the lodges, to the PH’s (professional hunter) and the food. Everyone treated us like family.”

Sharing a hunting camp with strangers, who soon become friends, is truly a blessing only few will ever experience. This sweepstakes contest soon became more than a simple hunting trip. Scott Shultz describes the adventure by sharing, “…it is the memories we create through our adventurous experiences, as well as the friendships we form along life’s zig-zagged path that weld into our hearts and minds those cherished pleasantries that last a lifetime.” Shultz was able to bring along his grandson and Schwahn his son. Both men will never forget sharing this experience with two very important young men. Shultz later shared with Schwahn, “Perhaps one day…after we have made our last trips… they will have themselves another fine adventure in Africa!”

Michael Waddell said it best, “…hunting Africa will help you understand how creative God was when he made the beasts of the Earth, because I still don’t know how to pronounce or even identify half of what we were hunting.” Africa is truly the dark continent, mostly untouched by man, left to exist naturally. Going on safari is truly the chance of a lifetime for most hunters. Until then, the rest of us can hope, pray and enter Robinson’s next sweepstakes!

Why Not Wearing Safety Harnesses?