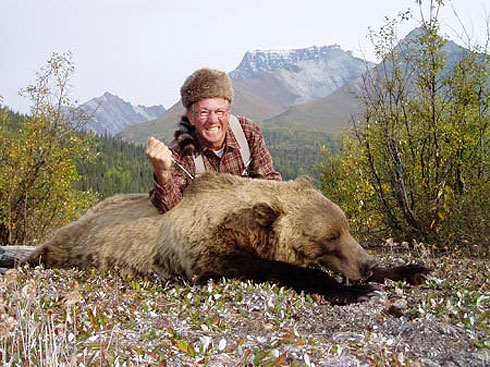 MidwayUSA Founder and CEO Larry Potterfield with his Griz.

In the time it takes to read this story, the grizzly bear hunt started and ended – about 60 seconds.

6:30 am in base camp, day 7 of a combination sheep, moose and bear hunt. Brenda and I are awake, but still enjoying the warmth of our sleeping bags on a cool August morning in the Wrangell Mountains of Alaska.

Suddenly we heard footsteps rapidly approaching our tent from the cabin. “Larry, Brenda, get-up quickly, bring your guns, a bear just chased me across the creek.” These were the words of our guide Bob Fithian.

Out of the sleeping bags, into our clothes. “Hurry folks, he is just behind the cabin and I am afraid the boys will have to shoot him!” Bob was referring to the other guides Heath and Phillip. On with our shoes, grab the guns, quietly unzip the tent and step out. “Where’s Brenda, is she coming?” asked Bob, but his question was answered before he finished as Brenda stepped out of the tent, rifle in hand.

“Now folks, please chamber a round very quietly. Any metallic sound may scare the bear away.” Done!

Bob took three steps toward the cabin, stopped and whispered, “There he is Larry, just to the right of that pole, shoot him.” In one of those rare moments when guide and hunter see the same thing at the same time, my eyes locked on those of the bear, facing us at 59 steps. I moved a half step to the right to clear some brush, raised my 300 Win Mag, held just under his chin and fired. The Nosler 165 grain Partition did its job. He turned, ran 70 yards and collapsed.

The rest of the story…

This part doesn’t count toward the 60 seconds. The evening before Phillip had finished packing out a moose from a spike camp in the mountains west of base camp. As Heath followed that same trail later in the morning to bring out the rest of the spike camp, he discovered that this bear had followed the horses down the mountain, apparently attracted to the smell of the meat. The bear apparently made our camp sometime before daylight.

At about 6:20, Bob had left his tent to check on a horse, picketed about a hundred yards away, out in the brush. As he returned there was the bear, standing about half way between him and the tent, just across a small creek. Bob changed course slightly, and walked “briskly” toward the cabin, taking several steps before the bear ran across the creek after him. Safely making the cabin and not seeing the bear, he notified the other guides, then hurried off to our tent. Those were the footsteps that started the story.

Decoys for Deer - Yes or No?