What About Using Good Scents? 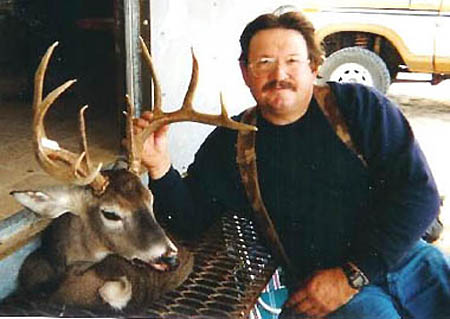 Author with one of many trophy bucks taken over Hot Trails.

Why don’t we depend and use attractant scents like we did in the past? That is a very provocative question. Since I manufacture Hot Trails Scented Hunting Candles, one might say I am a little biased, and you would be right. But you see, I GET IT and some of you get it, but a lot of people just don’t GET IT.

Hunting game is as old as mankind and with every generation comes improvements so that we are more successful more of the time than not, right? I mean, have you ever thought about just how much of your time and money is spent on just preparing for the hunt. Using myself as an example; first you have to spend time just to find a place to hunt unless you are lucky enough to own or have family land. Here in Texas we have very little State or Federal land to hunt on. It is mostly private land and you have to pay to play. For the last 22 years I managed a ranch in South Texas where I perfected our product.

When I first started it cost $1850.00 per person for the entire year. Last year it was $8750.00 per person. Of course we had fine animals which we game managed and we improved the herd every year. My reason for calling attention to this is just how many man hours does it take for you to just Pay for your spot. Then you have to add the cost of feeding corn, protein, and cotton seed year around which comes to another 3 to 4 grand. If a person was lucky enough to make $30 per hour, that comes to 10 ½ weeks of labor to just be a part of the group.

Now you have to have a blind to hunt from so add another $2500 and don’t forget the feeders add another $1000. So for just being able to call a place Your Hunting Lease you are out about 11 to 12 weeks of income. For God sake, do not let my wife or your wife read this or we will never have a lease again. Just think, 200 years ago all you had to do was walk out the door and go hunting. Of course then there was a lot riding on being successful, like not starving to death. So early Americans either were hunting or getting ready to hunt and gather food. That is why we called them Hunters and Gatherers. They might have spent 6 days hunting and only have been successful one of those days. They had primitive weapons and they had to improve everyday their technique and strategy so they could be more productive in what they did.

They learned about hunting around water holes, salt licks, and studied how the animals lived. The better they knew them, the better they got at killing them. Because they had primitive weapons they had to get the animals in close. Not to different from today. This is where the use of scents started to come into play. Just like today, if you are bow hunting it does you little good to see a deer at 50 yards, something to talk about but it does not put meat on the table. So they used scents to cover their smell (which had to be sooooooo bad), and scents to bring the game close enough to harvest.

Today it is not much different. New technology has evolved over the last 15 years in the form of Scent Free Clothing and sprays. These are great; in fact I use them myself. But from my own experience, if there is nothing around close enough to smell you who cares. It’s like the old saying, “If a tree falls in the woods and no one is around, does it make a noise?” I have been scent free and had animals out 50 yards, 30 yards, 25 yards and all I could do was watch. Now there is nothing wrong with having the opportunity to watch deer in their normal surroundings, but I did not spend the time to find a lease, earn the money to pay for it, buy the blinds and feeders to attract the animals, a trailer to stay in, food to eat, gas for the trip, bow and arrows to shoot, just to watch deer during the hunting season. No, I want to Kill something.

I go around the country to hunting shows and in the last several years I ask people if they use scents, and you would be surprised at the answers. “No, I hunt scent free”, “I never had much luck with scents”, and so on. I think of all the time and money spent just to get to the hunt to not spend just a little more on something that has proven itself to draw animals in close enough for a good clean kill shot.

I understand the ‘not ever had much luck with scents’ myself. That’s exactly why I searched and worked and experimented and eventually found how to make a better mouse trap? Scent works but scented candles work best. I used to use a very well-known brand of lure and NEVER, EVER saw any reaction from a deer. But the theory behind it and the history behind it were engrained in my mind and spirit. I just cannot tell you how much of a difference using a hot scented candle for hunting has improved my hunting experience. The other day I had a deer head just fall off the wall in my office. The smaller deer are in the office; my big ones are in the house. I really had not paid any attention to it nor thought about it much in a long time. This was one of the first deer harvested with my candles.

I was on top of my truck in an elevated deer stand about 30 yards off of a boundary fence and there was a road down each side of the fence. I had a candle up top with me to cover my scent, and one on the rear bumper near the license plate. One was covering my scent, one covering the scent of the truck, and both were putting out a Doe n Heat scent. This buck came out on the other side of the fence and started running along the fence, up 50 yards, and back 50 yards wearing himself out trying to find the doe. He was too far to shoot but he finally jumped the fence. Then he just stood there with his nose in the air, getting nothing but Doe n Heat in his nostrils. Finally he started to circle my truck and when I had a good broadside shot, my Matthews let it fly. Then I just laughed and laughed at how good the candle worked, I could not believe it.
Like I said it was one of the first deer taken with Hot Trails. After hanging him back on the wall I took some time to look at the other 19 deer I have mounted, thinking about how they were all harvested, how they reacted to the scent and how lucky I was to harvest each and every one of them.

When you hunt with a scent you need to be as scent free as possible. I have said this in previous articles I have written and obviously practice it myself. Wind blows the scent, and you cannot hunt with your face into the wind using a scent. If you do, you will get busted every time because the deer will always be coming from behind you. It is best to hunt in a cross wind. Last Year I sent some candles to Matt Moore, of Closing The Distance, TV show. I met Matt at a hunting show one year when he was only selling his brand of Deer Scents called Whitetail Products. He was just starting to think about TV and wanted to sell my candles under his own label. We have had a great relationship ever since. You will never meet a nicer, Christian man. Well last year one episode had 3 different hunts and they used the candles I sent them on two of them. It was really great to see a hunter collect two great deer using Hot Trails on TV.

I created an ad several years ago and maybe you have seen it. It says “NICE JOB COVERING YOUR SCENT, NOW WHAT?” This is what I have been trying to talk to you about in this article. Why would anyone spend all the time, money, and effort to go hunting and then leave out a primary method which has been proven successful for years? I just cannot understand how someone would do that, but it happens every day during the season. Not Me, I will turn over every stone, do all I can to make sure my valuable time is spent the best it can be spent. I am now nearly 66 years old and wonder just how many more years I will be able to Hunt. Time, its one thing we old timers are running out of, so use it the best you can.

At the beginning of this article I said I was biased. I have written this article to help you be more successful in the field. We don’t hunt to just be in the woods. We hunt because we want to take an animal. I know that if you give my Hot Trails Scented Hunting Candles a try I know you will be traveling down a road which leads to fulfilling your hunting goals.

I also want to thank the thousands of you who have used and continue to use our products. As many have found out, it is not a miracle and it will not produce a trophy every time used. But consistent use will bring more positive moments than just being “Scent Free”.

Bucks On The Move