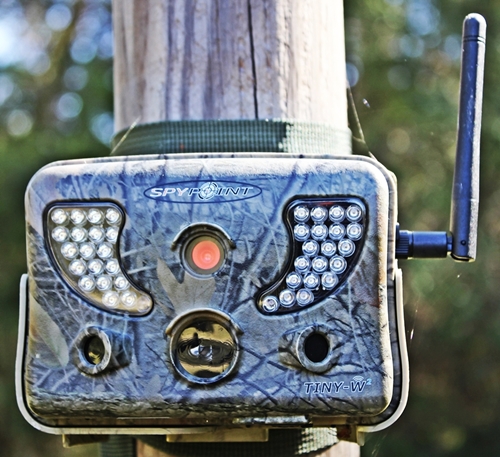 I high stepped slowly, taking care to keep the briars underfoot while dodging brittle twigs and branches threatening to signal the alarm to certain nearby critters. It was quite a long trek, I remember, especially in complete darkness. It was 4:30 a.m.; the frost-laden cloak of blacks and grays would not succumb to the golden hues of a rising sun for a couple of hours. Wind direction was perfect, hunting over the super-highway 20 yards in front of my ground blind was going to make for an easy hunt.

Another hundred yards through the briars and blood weeds brought me into a familiar clearing. I headed around the side of the clearing and edged back into the opposite tree line where I had carefully tucked my ground blind and brushed it in. As I neared the blind area cut back limbs and bare ground emerged. Only the branches and foliage I had used to conceal my setup remained. Someone had stolen my ground blind!

Why do we feel that electrical charge course through our veins the moment we realize we’ve become the victim of a crime? What causes that empty shutter in the pit of your stomach as you start processing the crime scene? I could feel my heart pounding and hear it in my ears. My stomach turned; the feeling there was hollow right down to the pit. When were they here? I made my way over to a nearby tree to grab my trail camera and realized my horrible morning had become a nightmare; they had stolen my trail camera as well – no blind, no camera and no photos of the perpetrators. Call them what you will, criminals, thieves, trespassers – they were all of the above!

What I wanted more than anything was to put another camera up but what would that accomplish? Sure, if they returned I would get another photo but likely lose another camera; I even considered using a climbing stand but in the end conceded that the ridiculous amount of effort to check the camera would be excessive; there was no guarantee the perpetrators would return. It seemed as though I had a dilemma… until I found out about SpyPoint’s Tiny-W camera. The first generation Tiny-W was incredible… and incredibly innovative. My only concern was the inability to hide the remote black box further away from the camera (50-foot transmission range). Well, Spy-Point promised an improvement and boy did they ever deliver! 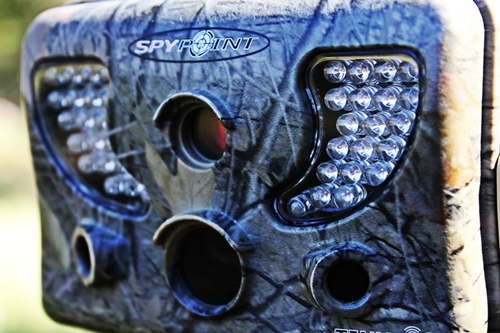 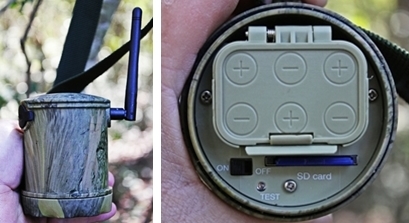 Upon capturing an image, SpyPoint’s second generation of this model, the Tiny-W2 immediately transmits a copy to the black box receiver nearly 100 yards away, at least five times further than the original Tiny-W! Imagine yourself in a trespasser, thief or poacher’s shoes. Your photo has just been taken. You break or steal the camera or steal the SD card to eliminate incriminating evidence. Imagine your surprise the following day when 8-megapixel images of your face are plastered all over the community. Now imagine law enforcement officers cuffing you as they advise you of your rights. How on earth did they catch you? With SpyPoint’s Tiny-W2!

The Tiny-W2 levels the criminal surveillance playing field at home and in the woods while offering game-changing scouting opportunities. Gone are the days of disturbing your setup to check your images; place your receiver anywhere within 250 feet of the camera and simply pull images from the receiver. 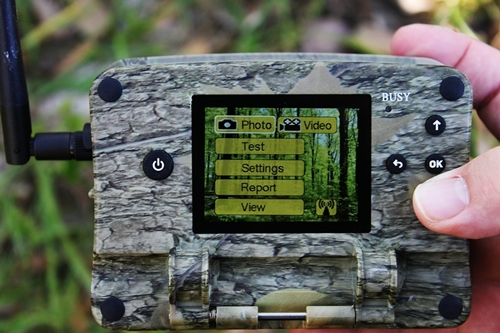 Still images are taken at interval options between 10 seconds and one hour in single shot or multi-shot mode; multi-shot mode captures six images per triggering. Three sensors create seven zones of detection resulting in blazing fast trigger speed. Did I say blazing fast? How about ZERO SECONDS compared to the industry standard of a 1 – 1.2-second trigger speed! The two side-sensors sense motion and wake the camera up to capture the image. When the subject passes in front of the center sensor, the trigger is instant. Images are captured in daytime color or nighttime infrared black and white and include date, time, moon phase and temperature information. The Tiny-W2 also captures 10 – 90-second video clips, in daytime color and nighttime infrared black and white at 640×480 resolution, perfect for YouTube and other video-feed platforms! The 2.4-inch viewing screen makes reviewing photos and adjusting settings a cinch while the ability to remove the camera from its slide-in mount means I can also retrieve the camera quickly and review photos while hunting from a stand or blind! 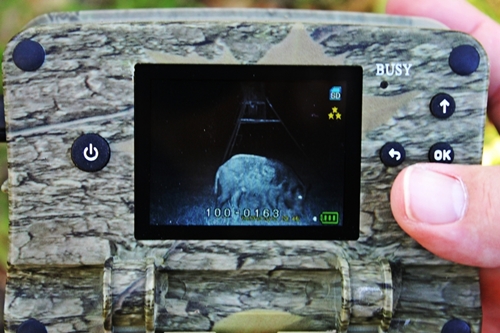 Detection settings are between 5 to 50-feet and 38 LED lights capture nighttime images out to 50 feet. Both the camera and receiver run on six AA batteries and include 12-volt jacks; both units also are solar panel compatible and use standard SD cards. The Tiny-W2 package includes the Tiny-W2 camera, Blackbox receiver, installation straps, USB and video cables, and a user manual. 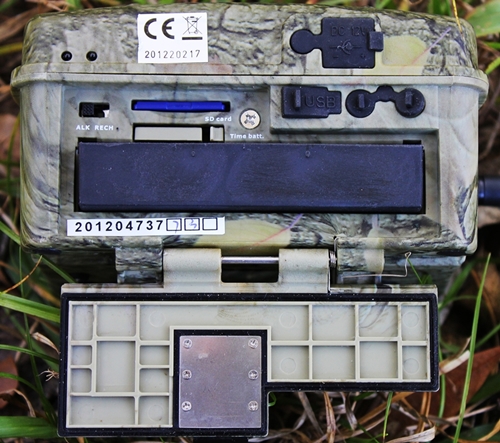 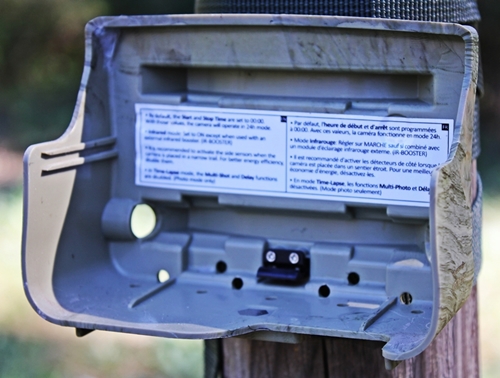 I attempted to compile a list of concerns about this camera but there really wasn’t a list to be had. It’s truly a phenomenal camera. Considering improvements to the camera, I might ask for a viewing screen on the Blackbox even if the receive was a little larger or perhaps the ability to transfer images from the Blackbox receiver to another wireless device such as my cellphone or a tablet. This might allow for recovering images at even great distances. Some of SpyPoint’s HD-12 Trail Camera Black LED’s would also be a great addition to the Tiny-W2 if a third generation camera is in the works!

However, the truth is that whether you’re after a giant whitetail buck, bruiser wild boar or the scum of the earth that just victimized you and your family, the Tiny-W2 is the best, most practical, most cost effective answer; MSRP for the Tiny-W2 is $299. 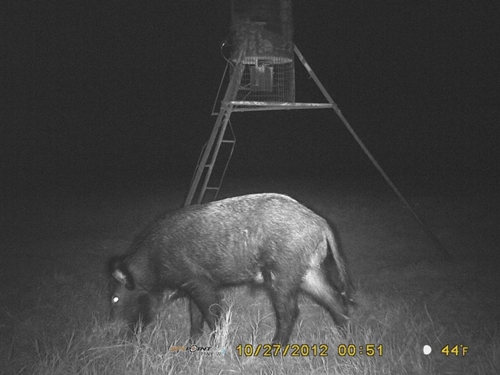 Any way you slice it, the Tiny-W2 is definitely a 5-star game changer! With the Tiny-W2 and other phenomenal offerings, SpyPoint has landed on the leading edge of trail and surveillance camera innovation! I can’t wait to see what they come up with next! 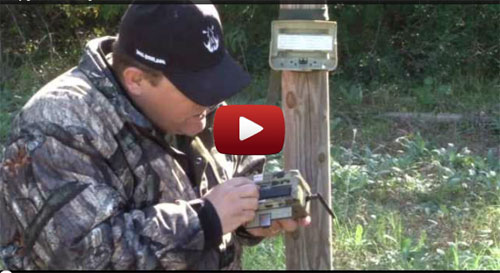 Visit www.SpyPoint.com to browse a diverse range of other innovative products including more innovative trail camera models and great lineup of accessories. SpyPoint.com also offers technical support, contact information, a gallery of trail camera images and a comprehensive list of distributors near you.