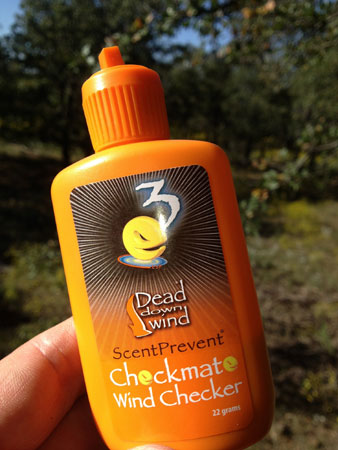 All those that bowhunt know the importance of scent control. When I started hunting back in the 1960’s, I really paid attention to controlling my scent. I would dig up dirt and leaves from the timber I was hunting and put the debris in a plastic bag with my hunting clothes. My rational was to smell like the environment I would be hunting.

Since those early days, scent control has evolved into a science. The past two years I have field tested and used Dead Down Wind products exclusively. I have put their products to the test and I can tell you adamantly, I have not been winded one time on any of my many hunts.

Last week I really put the Evolve 3D Field Spray to the ultimate test. I did not have time to shower after sweating all day in the hot Texas sun. I put on my Sticks n Limbs camo and sprayed myself liberally with Evolve 3D and climbed into my stand. Under normal conditions I would have never gone hunting with my full routine but I really wanted to see just how good Dead Down Wind was.

The wind was blowing 20 mph from North to South and I had a large old boar come in directly down wind within ten yards of my stand. He came in slow and cautiously checking the wind the whole time. In my opinion if you can fool a hog’s nose you are accomplishing something. I put an arrow in the boiler room of the big guy and it was over. I still don’t believe he didn’t wind me! My conclusion was pretty basic and simple. That boar didn’t wind me because of the Evolve 3D field spray. That was the difference.

I would never recommend to anyone embarking on a serious hunt to do what I did for my test. Dead Down Wind has the products and a script to follow and except for this one hunt, I follow it to a tee. The first step is to wash your clothing in the E1 Triple Action Laundry Detergent. This particular formula eliminates the odors and unclogs the carbon molecules in your clothing and it will never cause your camouflage pattern to fade. How cool is that, finally a detergent that does not ruin your camo!

The second step is the E2 Personal Hygiene. This important step starts with personal hygiene and showering. E2 has two very important components, elimination and also prevention! Most bodies produce and emit what is initially an odorless secretion. This process does not begin to create odor until it hits the air and bacteria takes over. The E2 products help not only in the clean-up process but also in the prevention of the odor forming the bacteria. This hygiene product continues to work long after you leave the shower. Again, this is a very important step in the scent elimination process.

The third and final step in the last line of defense is the Evolve Field Spray. This incredible advanced enzyme technology helps prevent a multiple spectrum of odor molecules including human, smoke, gas and other contaminant odors. In my humble opinion this last step makes the hunter undetectable to an animal’s nose. To sum up the results of my two year field testing of the Dead Down Wind products is; use Dead Down Wind Products and follow their three step system. If you do I can promise you will go undetectable.

Dead Down Wind has a very informative web-site. Go to www.deaddownwind.com