The Wolf Is Already At The Door! 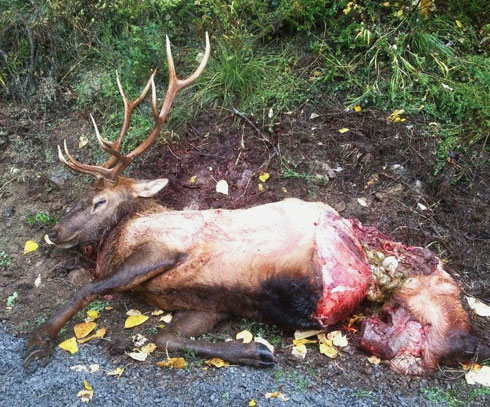 Where wolves and other predator numbers have been allowed to escalate, big game numbers are crashing quickly. Federal closures of public land make it harder for hunters to better control predator impact.

The LOBO WATCH website, which was launched in 2008, has been received differently by the two distinctly opposite sides of the wolf issue – which have been labeled “anti-wolf” and “pro-wolf”. On one side of that fence, you’ll find the sportsmen of this country who pretty much footed the bill for early wildlife conservation efforts that brought big game populations back from the brink of being lost forever. On that same side, you’ll also find rural residents, farmers and ranchers, many of whom work the land to produce livestock and crops for feeding this country – and much of the world. On the “pro-wolf” side of the fence are mostly those who oppose hunting, and those who want to eliminate large scale free market ranching and farming.

In a way, this is very much the same ideology which separates Republicans and Democrats. On one side of that fence, we have Americans who are willing to work, who share a pride in ownership of property and home, and who strongly believe in the rights of American citizens. On the other side, we have a society that has gotten lazy, and looks to the government for any free handouts thrown their way. They take little pride in America, and revel at the thought of the United Nations’ becoming the single global government – a world entirely dependent on social welfare.

But, we’re not talking about the different mind sets of Republicans and Democrats – we’re simply taking a look at what separates the stringent “anti-wolf” crowd from staunch “pro-wolf” believers.

First, it should be pointed out that most of those who have been deemed “anti-wolf” are far from being totally against wolves. What many are against is simply allowing large predator populations to continue to grow and expand their range – destroying harvestable wildlife resources that took nearly a hundred years to restore to record levels. While wolves have made the single largest impact on elk, moose and deer populations in the Northern Rockies, and to big game herds in the Upper Midwest, other large predators including mountain lions, black bears and grizzly bears also add greatly to the depredation of the game that millions of American families rely on for food. The sportsmen of this country, along with those who derive their living and partially their sustenance from the land really don’t hate the wolf. What they hate are radical environmental and animal rights groups, which have never helped finance true wildlife conservation in this country – those who now feel the bounty of game rebuilt since the early 1900s should be thrown to the wolves and other predators.

Those who call themselves “pro-wolf” are far from that as well. Hiding behind names like the “Defenders of Wildlife” or the “Center for Biological Diversity”, these so-called “Non Profit Organizations” are also far from being nonprofit. They are anything but. Each of these groups, and there are several dozen of them, manage to beg or con hundreds of thousands of donors out of millions of dollars every year.

In 2009, the Defenders of Wildlife had a total income of just over $32-million – very little of which was actually spent on “Defending Wildlife”. Much of that money was spent on fundraising to keep the cash flow very much in their favor. This organization was also a member of the environmental “Dirty Fakers Dozen” (13 environmental groups) which kept wolf management tied up in court, allowing fast growing numbers of the predators to destroy the elk herds in the Northern Rockies. Their No. 1 money maker was suing the U.S. Government, and between 2003 and 2008 the Defenders of Wildlife and other similar groups filed more than 1,500 such lawsuits, and through an extremely raped federal program known as the Equal Access to Justice Act these groups carted off an estimated $4.7-billion U.S. taxpayer dollars – in restitution and for reimbursement of extremely padded legal expenses.

It’s not about being “pro-wolf”, or saving wildlife – it’s about money.

Former U.S. Fish and Wildlife Service director Jamie Rappaport Clark took the reins as President and C.E.O. of Defenders of Wildlife in October 2011. Prior to that, since 2004, she had served as executive vice president for the organization. Currently, her annual salary exceeds $300,000. With perks and benefits, it’s more like $400,000. Former Defenders president and c.e.o., Rodger Schlickeisen, who held that office for 20 years, had an annual take home pay of just over $380,000 when he stepped down. Throw in all the benefits and bonuses these people like to give themselves, and rest assured his annual bottom line was closing in quickly on $500,000 annually. He stays on with the organization as President Emeritus – which probably rewards him about the same salary.

Clark’s appointment to head USFWS was plagued by the theft of at least $45-million dollars from the Pittman-Robertson funds that sportsmen pay in the form of excise taxes on hunting and fishing gear. By law, those funds are to be used exclusively for wildlife habitat and fisheries improvement. The money that Clark fraudulently pulled from PR funds was used to give bonuses, to establish a travel slush fund, to build a new USFWS office building in California, and according to one high ranking former USFWS chief, millions of those sportsman tax payer dollars were used to fund transplanting a non-indigenous Canadian subspecies of wolf into the Greater Yellowstone Area.

No one has ever been held accountable for that theft. And whether or not if you agree with such misuse of taxpayer dollars, or if organizations like Defenders of Wildlife actually end up receiving your hard paid tax dollars, it continues to happen.

Major sportsman-based organizations also provided funding in 1996 for the NFWF – including Ducks Unlimited, who handed over $1,571,000 sportsman provided dollars, and the Rocky Mountain Elk Foundation provided $205,000. Even Quail Unlimited kicked in with $112,000 provided by their membership.

On the receiving end of NFWF “grants” was none other than the Defenders of Wildlife. In fact, from 1986 to 1996, that organization received $184,000 dollars from NFWF. Another equally lame anti-hunting, anti-human use of the land organization also regularly on the receiving end of NFWF monies has been the Natural Resources Defense Council, plus a few other organizations which today want to destroy hunting in this country – and which fully support the continued growth of predator populations, and the continued destruction of big game numbers.

It’s unfortunate that the NFWF seems to work too willingly with organizations that have been trying to yank the rug out from beneath today’s sportsmen. NFWF is a major supporter of the Wildlands Network, and for establishing protected corridors so major predators can move freely from one area of the Northern Rockies to another – even though, right now as you read this, it is a glut of such predators that has destroyed many elk herds in Montana and Idaho by as much as 80-percent. To create those corridors means closing off public access to large tracts of National Forest, effectively making a lot of new wilderness areas. This very practice has already created a tremendous amount of tension between sportsmen and federal or state wildlife agencies.

With as many as 2,000 or more grizzly bears now in Montana, along with 2,000 or more wolves, residents no longer buy the claims of NFWF and other such mega conservation groups that these corridors are essential for the continued survival of these major predators. The number of grizzlies in Montana has more than doubled over the past ten years…and so has the number of wolves – without these wildland corridors. Right now, the number one concern of Northern Rockies sportsmen and rural residents is the need to dramatically reduce the number of predators now threatening other wildlife resources – not to insure that their populations continue to grow.

What angers sportsmen the most is how their own money has been used to steal hunting opportunities from them instead of being used to insure greater and healthier big game herds. Jamie Rappaport Clark showed absolutely no remorse when she was caught with her hand in the Pittman-Robertson wildlife habitat restoration cookie jar. All she had was excuses, in particular claiming she didn’t know that those funds were exclusively for wildlife habitat and fisheries improvement. Did USFWS make any effort to repay the money stolen from state agencies? No. Now we have the NFWF using millions of taxpayer dollars to shut hunters, anglers, hikers, campers and other outdoor recreationists out of millions of acres of public land. Why? There is a new agenda among today’s new wave wildlife managers, and it doesn’t look good for sportsmen.

Wildlife management is severely broken in the U.S., and that’s because the sincerity of wildlife management has been lost. The North American Model of Wildlife Management, which has been based on hunter and angler involvement, was once the envy of the world. Now we have new agenda driven wildlife managers seemingly all working toward the same goal – to eliminate hunting and to allow nature to balance itself. And that, in itself, requires one heck of a lot less people on the face of the Earth.

That is exactly the goal of the United Nations as we know it today. In order to achieve “Sustainable Development” and to fully control Earth’s human population, the UN has two primary goals. One is to establish a single “World Government” with one global language – and to reduce the human population by the end of the 21st Century by 80 to 90 percent. That program is known as Agenda 21. Another goal is to disarm the citizens of the world and to create those “wild corridors” and enlarged human-free wilderness areas. In this country, the re-wilding of America is known as the Wildlands Network. It’s already being implemented, with public land closures now shutting out humans so grizzly bears and other major predators can roam freely and increase their numbers in the Northern U.S. Rockies.

The Wildlands Network not only has the federal government’s seal of approval, agencies such as the U.S. Fish and Wildlife Service are now partners in this closing of public lands. It’s also easy to see that the U.S. Justice Department has made it easy for groups like the Defenders of Wildlife…the Center for Biological Diversity…and Earthjustice, which drive the so-called “Green Movement” in this country, to profit and thrive through frivolous lawsuits. Institutions of higher learning, such as the University of Montana, are now turning out very questionable wildlife managers which no longer adhere to the North American Model of Wildlife Management. And as odd as it may seem, major retail giants, such as Wal-Mart and Bass Pro Shops are working hand in hand, through millions of donated dollars, to support the very agencies and programs which are now working harder to destroy hunting in this country than to insure healthy and harvestable populations of big game.

Perhaps I was wrong when I said this has absolutely nothing to do with the political differences of the Republican and Democrat parties. After all, those U.S. voters living on only about 10- to 15-percent of this country’s land mass just re-elected a president who fully supports “Big Government” with more power and control than ever. But then, he was ushered into politics by some of the world’s richest billionaires – which have extremely strong ties to the United Nations and Agenda 21.
If the wolf is not already at your door, it will be soon.

From Barnett Crossbows - the Jackal