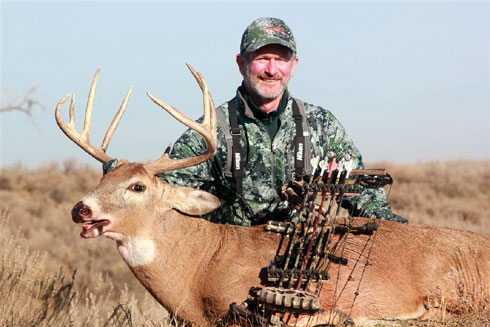 Robb’s buck was taken in a funnel running between a water tank and bedding thicket. It green-scores 143 P&Y points.

The rut is rolling in many places now, and by all indications it has been an interesting one, red hot in some areas, slow to develop in others. Regardless of what it has been like for you, all serious whitetail hunters look for ways to maximize their chances when the bucks start chasing.

We try lots of things. Doe-in-estrous and territorial scents can play a big role. At times decoying can work magic. Knowing your hunting property well and being able to set up where the does spend most of their time – bedding thickets and preferred food sources – often pays off big when you find a mature buck cruising past in search of his next sweetheart. And, of course, funnels between these two habitat types are always a good bet.

The one extra ingredient that has paid off for me in recent years, though, is water. Especially in areas where drought conditions have left the habitat parched and dry, adding water to the game plan is like sprinkling just the right amount of garlic powder on top of a juicy steak on the grill. Without it the meat will be pretty good; with it, superb.

It’s a fact that bucks that are chasing does hard need to drink a lot of water. Even in cool, moist ecosystems they’ll drink at least once a day. In arid areas it is more than that.

A case in point is a place I have hunted a lot in recent years. Located in southwest Kansas, the drought hammered the habitat there this year. The terrain is mostly sand hills and sagebrush broken up by fingers of cottonwood river bottoms that are often dry as a bone. The cattle ranchers drill wells, with the water pumped either by windmills or a solar panel-powered pump. On this year’s hunt when I made the rounds scouting for sign, by far the most tracks were found around two water-filled tanks in the sagebrush.

And so this year, just as I did last season, I set a ground blind on one of the tanks. The blind stuck out like a sore thumb and while the deer didn’t like it a whole lot, they still came and drank. Here’s how my friend Steve Sam, who has hunted with me here for several seasons in a row, and I played the hunt.

We have permission to hunt the river bottom, which is where the landowner runs cattle for part of the year. Essentially the deer do not live here, but they do travel the bottom between the neighbor’s, who grows corn and winter wheat and has irrigation pivots on one end, and a large city-owner sanctuary area where no hunting is allowed on the other end. On both sides, deer bed in the sagebrush-covered sand hills.

OK. There is one corner of the property where we have a stand that the deer love to use as a funnel. Their routine is to come out of the sagebrush – they often bed a mile or more from this little corner – and stop at one of two tanks for a drink before cruising through to the agriculture. When the wind is right this is a great place, one of those classic funnels that you can sit in for several days and see nothing and then, wham! There he is. This year Steve only sat there two days when a buck with 21 ½-inch spread and 21 ½-inch main beams gave him a 20-yard shot. Even broken up a bit the buck scores a tick under 160 P&Y points.

I hunted the water tank ground blind for a bit and had some action but needing a change of pace, opted one morning to hunt another stand set in a funnel between bedding ground and a water tank a quarter mile away. As dawn broke I spotted a nice buck cruising through, and then another giant 8-point I thought would push 160. The two did the dance, necks swollen and hair on edge, but never locked horns before the whopper 8 walked out of bow range toward the tank. The other buck – with a broken left G-2 and broken right G-1 – picked up a lone doe, tending her as she slowly fed along. Fortunately for me she passed within 30 yards of my tree – and so did he. A Thunderhead 125 to the ribs ended his run. He gross-scores 143 P&Y.

One other thing I do when hunting on the water source itself is add a touch of doe-in-estrous scent to the equation. In this case I placed wicks loaded up with Wildlife Research Center’s Special Golden Estrous scent on the edge of the tank, and used a drag rag with the same “secret sauce” as I hiked to the blind each day. I’ve found over the years that this little extra will encourage rutting bucks to visit the tank and its surrounding habitat.

The common denominator in our success was setting up in travel corridors between water and other key habitat types. We then played the wind and put in our time. This is not the first good buck I have killed with water as the focal point of my strategy. It’s something I urge you to consider when shaping your own rut-hunting plans, too.

From Barnett Crossbows – the Jackal