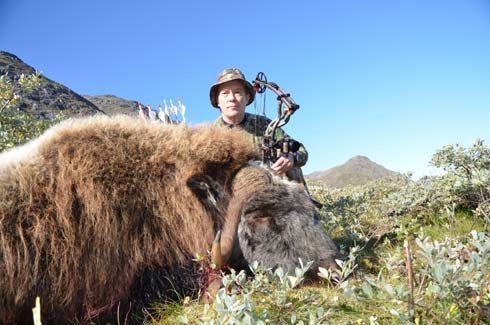 The low willow mat did not offer too much cover to the hunter and cameraman who approached the musk ox herd. Nearly 200 meters had been crept, but still they were too far from the herd. As the hunters closed the distance between them the seven massive musk oxen leisurely stripped the scant nourishment from a rugged stony country unsuspecting of the approaching danger. The most handsome bull challenged the group of younger bulls and sniffed the cows as only the king of the fjord can do.

It was only a year ago when I was writing emails to Greenland in the role of a bowhunting specialist of the CIC. Together with the help of the EBF, the European Bowhunting Federation, we were offering research information and our expertise to encourage the decision-makers in Greenland to legalize bowhunting. The ice continent had become interested in finding out the pros and cons of bow hunting and there also was a rising interest in bowhunting tourism and the funds it could provide.

At the beginning of January, outfitter Frank Feldman  of Bowhunting Greenland rang telling me that Greenland had decided to legalize musk ox hunting with the bow. After the happy news, Frank asked if I would like to come in September. Frank bowhunts himself and is the only bowhunting outfitter in the country. After some serious considering of a couple of seconds, I said yes. I reserved the first possible time slot for a four person group. My friends didn’t yet know that they would go to Greenland soon.

In the small hours of September fourth, I and Asko Kukkonen left the guest hut of Frontier Archery and began the trip to Stockholm. The president of EBF (European Bowhunting Federation), Anders Gejer joined us at Arlanda Airport. We flew to Keflavik Iceland and took the bus to Reykjavik. At the Reykjavik airport two American biologists, C. J. Winand and Jim Thompson, the cameraman, gave the Scandinavian team a joyous welcome.

We heard the bad news that the luggage of CJ had been lost on the way to Iceland but we soon descended to Narsarsuaq, the first destination in Greenland. The skipper of a charter boat stepped on the dock and welcomed us on a Finnish made Targa 25 boat. The captain told us that he would take us direct to hunting camp instead of Qaqortoq where we were supposed to overnight before entering the camp. Fine, we would get one extra hunting day!

The skipper managed to negotiate the boat among the beautiful ice floes and icebergs to Ikka Fjord, our hunting area. We saw a fluttering flame in a dark night. Frank had lit the fire to point at the direction to the cabin.

After finishing the warm reindeer meal with red wine, we hit the sacks of the bunk beds.
We had arrived at the camp in the dark, and had no idea how the place would look like. The cabin was comfortable and quite new. The gas heater would keep us warm while in the hall there was a gas stove for cooking. In a separate small room we had the kitchen sink and the closets. The water would be carried from the rushing waterfalls from the mountains.

In Greenland there is no usual hunting permit in use. Hunting is a part of normal everyday life. The Inuits believe they know better than others how to hunt. “We have seen the white man hunt and some sure does not know how to hunt!”

The right to hunt cannot be taken away from the aboriginals.
Hunting is so common an activity that even a 12-year-old can walk in a shop and buy a rifle.

The nice smell of fresh coffee and fried bacon got us up early in the morning. I peeped out from the small window of the upper bed. The landscape was incredible. The handsome steep mountains reflected from the calm fjord. There were waterfalls rushing down from the glacier mountains. Not a single tree was seen, only knee high brushwood and winding brooks flowing to the fjord.

Jim was putting together some expensive looking camera equipment while the rest of us prepared our gear for hunting. We drew straws to see who would be the first stalker. It was I who got the longest straw.

We found the first herd easily but the stalking failed and the musk oxen fled to the mountains. We returned to the cabin and took the boat deeper to the fjord. We glassed the slopes and soon found a new target. On the rocks of the opposite shore we saw seven musk oxen. At least one of the bulls had handsome horns. We left the boat and checked the wind direction. It was not easy to stalk within bow distance over an open hill. The only way to get within sure kill distance was to crawl on our stomach in the willow.

The low willow mat did not offer too much cover for us as we approached the musk ox herd. Nearly 200 meters had been crept but still we were too far from the herd. As we closed the distance between them the seven massive musk oxen leisurely stripped the scant nourishment from a rugged stony country unsuspecting of the approaching danger. The most handsome bull challenged the group of younger bulls and sniffed the cows as only the king of the fjord can do.

When the distance was still over 80 meters, the Inuit guide asked if the distance is OK. “We need to get much closer”, I answered. The big bull laid down. The only decent approaching direction would have been from behind a big stone on the edge of the hillock but an incredulous young musk ox stood in front of the stone monitoring the situation. I whispered to Ejnar, the Inuit guide, that I’d wait for a short while and try to descend to the gully on the left and circle around to the lying bull. Ejnar accepted the plan.

We left Jim, the cameraman and crept down. I managed to get within 30 meters and the musk ox rose up. He went again after the lesser bulls. When the angle was good for a shot I noticed there was another animal directly behind the bull. I was afraid to take a shot fearing a pass through that would possibly hit the other ox. The situation lasted only a few seconds and the bull kept on moving further away. At last the waiting and the self-control were rewarded. The ox settled beautifully sideways at 45 meters apart from the herd. I pulled back the heavy Hoyt Carbon Element in a difficult position and rose slowly on my knees. The arrow with white Bohning Blazer fletching disappeared in the thick fur by the foreleg and hurtled out from the opposite side to the water down in the Fjord. The musk ox’s long and thick and long wool makes the shot placement difficult but to my relief the lighter coloured leg’s lower part became red.

The herd started moving toward the higher elevation. The lethally hit bull paced slowly downwards. I got a bit worried when the ox did not fall down in a few seconds like even much bigger animals typically do after the arrow has pierced the chest. Frank, who had come to us, noticed my worry and said broadly smiling it is yours! And correct he was. The ox gave up and fell down after a short walk.

When I was surprised at the toughness of the musk ox, the happy outfitter tapped to my shoulder and said, even young oxen go typically longer after 3-4 bullet hits.

After a snack Anders, Jim, Frank and two Inuits headed toward the brooks which run down from the mountains. The dark lumps far on the slopes were musk oxen. Two local Inuit hunters took a boat and circled the cape to be ready at a good spot if the hunters were successful.

While the hunters and guides went on we others enjoyed the calm sunny day by the bright blue cabin. We were surprised at how warm it was still at the beginning of September even though we were in Greenland known as a cold ice continent. A few hours had rolled by when the white motorboat sped ashore. The crew made waves shouting, “Anders our man!” Anders had indeed killed a trophy class old bull!

After the sun went behind the Glacier Mountains it was time to celebrate with good food and red wine. The European way, we drank a few toasts to the magnificent animals that fell to our arrows that day. Sleep came easily for me even as the happy talking continued late into the night.

At the break of dawn Asko, Frank, Jim and Jørgen headed to the waterfall behind the cabin. The rest of us stayed in the camp. Someone was shooting the Rinehart Cube target, another was cooking the skull of a Musk Ox in a big old oil barrel and all were just enjoying the good life.

The men returned before the noon. From far away we saw that the hunt had been successful. It was the way the men walked, joyously and relaxed. Jim stated this footage will be seen in the TV Show!

Frank had guided Asko within 30 meters of a group of musk oxen. A well-placed boulder had helped cover the stalk and Jim could follow Asko right behind his shoulder with his camera.

The arrow pierced through the long horn musk ox and the bull departed his life in a few seconds.

This was not the end of the morning hunt! Soon after, a young musk ox presented himself, the kind of animal which is perfect venison for the hunting camp. Frank gave the signal to shoot and Asko didn’t hesitate.

The hunt had been great so far. If only CJ’s bow case and big bag would arrive! Frank kept on calling the airport with his satellite phone. The fact that we were hunting in a fjord that was accessible only by a small boat (6 hour ride each way), helicopter or float plane, made us worried. It was difficult to believe the airline would send the luggage to such a wilderness place.

On the evening of the third hunting day we were celebrating the second musk ox of mine and Anders’. Suddenly, Frank pointed out in the fjord. There was a little light out there. We rushed out to welcome the arriving boat. Two men in the small motorboat lifted the SKB bow case and the big duffel bag to CJ. And both Americans were happily dancing and yelling on the slippery stones of Ikka Fjord.

The good luck continued and C J turned over an old handsome musk ox on the fourth day. Also Jim, the fisherman, fulfilled his dreams and got a full 10 Arctic chars!

We had completed our hunt perfectly in just four days, so we had time to clean the skins and skulls, to collect mussels for organic food and climb the high mountains to look for the ptarmigan and white hares and enjoy the splendid landscapes.

Attitude Bears: Judging Your Next Trophy